A few bits and pieces from the past fortnight that deserve highlighting for shoe enthusiasts. 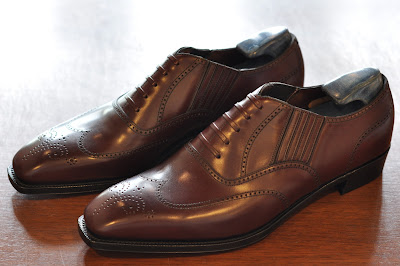 Cleverley is introducing a limited edition Burgundy Calf Churchill shoe – the model first released as a separate limited edition last October – to raise funds for victims of the Japanese earthquake. Only 50 pairs are available, the 10 allocated to Asia having already been pre-sold; 20 others are available in London and 20 in America. They cost £950 ($1700), of which 10% of the funds go to the Japanese Red Cross. 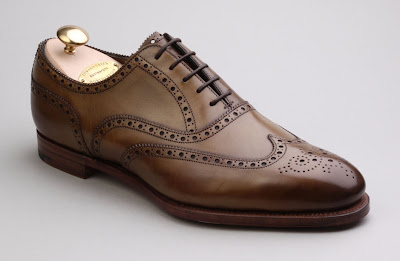 Edward Green has some beautiful new lines coming in, mostly around new colours and materials on existing lines. My favourites are three new Kibworths in calf and, best of all, mushroom suede. The Kibworth is an elastic and leather gusseted slip-on, like the Churchill but without the Cleverly-specific lacing (gussets are clearly in for S/S 2011). Also new is the Malvern lace-up in chameleon – a nice green/tan colour (pictured). 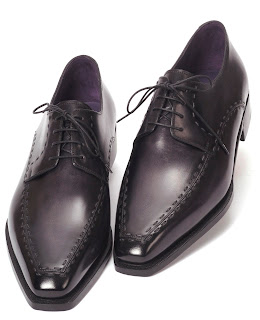 Finally, in rather a break with the past, Berluti is doing its first Goodyear-welted line, in the Demesures collection. The welt is still pretty narrow, as you can see, but not as close as the normal Blake construction Berluti uses for its shoes. They are, however, more expensive than the other ranges at £1220.

You can follow the discussion on Shoe news: Cleverley, Edward Green, Berluti by entering your email address in the box below. You will then receive an email every time a new comment is added. These will also contain a link to a page where you can stop the alerts, and remove all of your related data from the site.

Yes, I'd certainly have flap pockets if I wanted something smarter

Thanks Tom. Hard to object to off-topic comments when they're so nice!

A directory of local shops like that? Yes I think it could but it would have to be very reader-driven, no way I could keep it up to date. Also very dependent on consistent input.

Perhaps for a much smaller turn-up, done in the cheaper way without the overlap, yes. But ask the tailor, yes