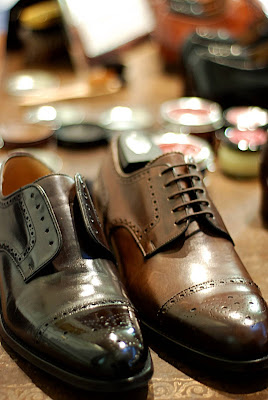 Justin Fitzpatrick does a mean shoe shine. The aspiring shoe maker and great blogger (The Shoe Snob) was set up by Gieves & Hawkes recently to do shoe shines for customers as part of its general re-fit (which also includes Bentley’s antiques, see Permanent Style post).

At the moment Justin has a little table in front of Carreducker‘s beautiful bespoke room, but soon he will have a purpose-built cubbyhole on the other side of the room. He displays a few before-and-after pairs, such as those shown at the top, as well as customers’ pairs awaiting collection. For there are three levels of shine, costing £5, £10 and £20, that culminate in a Military Parade Shine which takes three hours and usually involves six layers of hand polishing.

I gave Justin my Cleverleys to work on, which have had some nice layers of black polish on the toe cap but needed some general love elsewhere. You can see the results below.

I think it’s fair to say that Justin tends towards a high, military-like shine, but he is equally willing to temper that or tweak it to customers’ preferences. 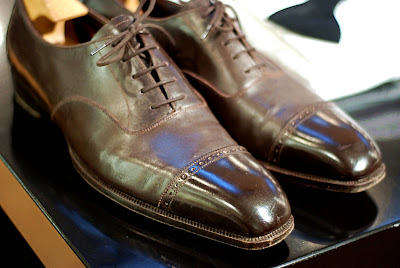 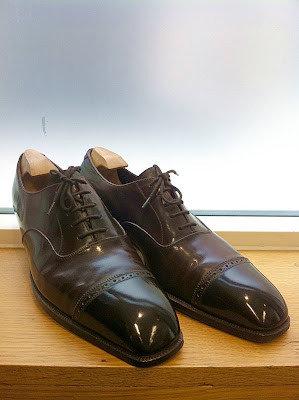 You can follow the discussion on Shoe shine from the shoe snob by entering your email address in the box below. You will then receive an email every time a new comment is added. These will also contain a link to a page where you can stop the alerts, and remove all of your related data from the site.

Hi Shawn, I've seen some very good results from it, so I'd recommend it, with the caveat that I haven't tried it myself. If you really like the Sexton style, think you'd get good use out of that type of suit, and can't afford the…

Thanks. You might have more luck submitting it to Marrkt.com as part of their current call for readers' pieces (see today's post on the pop-up shop)