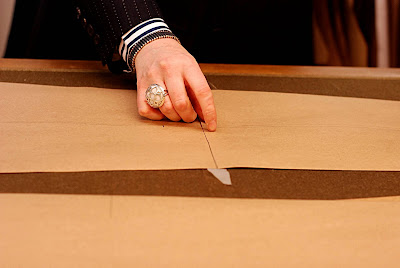 The most interesting aspect of watching the cutting for the Perfect Travel Blazer this week was, oddly, not the blazer but the trousers we are making to go with it. These are in a mid-grey, 9/10 ounce fresco from J&J Minnis.

Fresco is such a great travel cloth, its weave and treatment meaning it creases very little but is suitable for temperatures from temperate to roasting. We decided against it for jacket, because that very sharpness would make the blazer less versatile. But in trousers this is less of an issue. Mid-grey fresco trousers will transfer nicely from formal blazer to casual knitwear. 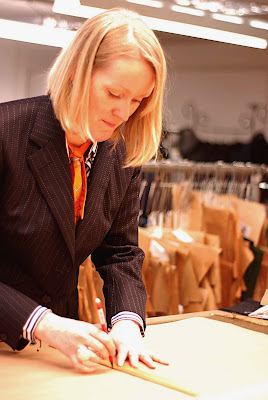 As to the cutting, Kathryn Sargent (Gieves head cutter) took a small slice out of the pattern around the knee area, to shape better on my apparently slightly bowed legs (top). I haven’t seen this done before, so I’ll be interested in how it turns out. You can tell if you have bowed legs, by the way, by looking in the mirror and putting your feet together – it’s one thing a tailor is looking for when they measure you in this position.

I’ve long learnt that the important thing on trousers for me is getting enough of a scoop into my lower back – it’s what comes of having a relatively large ‘seat’ and a small waist. Toby Luper and Hemingway Tailors in particular seems to have mastered this. Kathryn will increase the back rise slightly: it’s normally 1½ inches; she will raise it to around 2.

One design detail on the trousers is the fob pocket – the small one below the waistband on the front that can be used for change. I usually find this too tight, narrow and deep to be accessed easily. Albam is the one British ready-to-wear brand that seems to get it right. So Kathryn is going to cut it slightly shallower than normal, at 2½ inches deep. 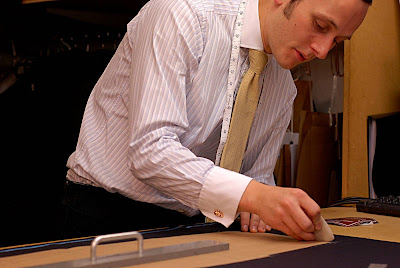 The cloth for the blazer is being cut out here by Richard Lawson, Kathryn’s apprentice. Richard often does the cutting after Kathryn has developed the pattern. He has been working with Kathryn for three years now, and is just starting to develop his own client book. Unusually, he started at Gieves 18 months before that, on the retail side.

Before that Richard had studied to be an engineer, and he thinks there are some similarities between that and tailoring – at least at the level of turning two-dimensional drawings into three-dimensional structures. 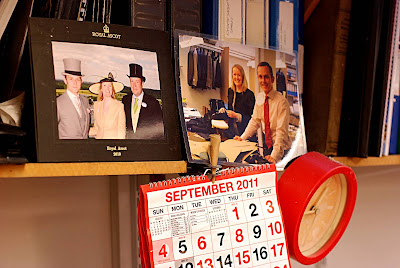 First post, on the design of the Perfect Travel Blazer, here.

You can follow the discussion on Gieves & Hawkes: The perfect travel blazer 2 by entering your email address in the box below. You will then receive an email every time a new comment is added. These will also contain a link to a page where you can stop the alerts, and remove all of your related data from the site.