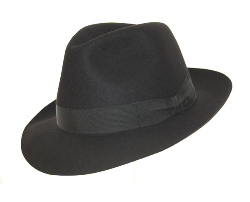 I’ve had my first proper hat – the brown Voyager from Lock & Co written about here – for over a two years now and it’s been worn pretty intensively. Indeed, it could probably do with a re-blocking at some point. That will be a separate post in the future.

For the moment, I’m focused on what to do to expand the hat collection and so take some weight off the Voyager. It was bought deliberately because its soft construction and dark brown colour made it very versatile – good with both suits (if worn with brown shoes) and more casual clothes. Now it’s time to find two more hats, one more casual and one more formal.

Here I’m going to concentrate on the latter. Several things make a hat more formal. It tends to be made with a thicker felt, and therefore be harder. It tends to be lined, giving it structure internally. It tends to have a thicker ribbon. And it will tend to a broader brim.

Linings are pretty impractical as they are the first thing to wear through, but they certainly make for a smarter hat. A broader brim isn’t necessarily more formal but there is an association there – the original English trilby was the racing felt, and in these circumstances a horserace is not a formal event.

The Voyager is a thin, unlined felt with a thin ribbon and a relatively narrow brim. All these things make it easy to roll and travel with, as well as being more casual. I’m talking here only about trilbys and fedoras by the way – what most men would think of as a proper hat – and nothing more extravagant like a Homburg or a bowler.

With these things in mind, I went down to Lock & Co last week to browse through the options. The Chelsea is a lovely shape with quite a narrow brim (probably the closest thing here to an original racing felt) but quite square in the crown. The Madison is slightly broader in the brim but had too high a crown for me.

(You can tell how arbitrary the trilby/fedora distinction is by the fact that Lock classifies the Madison as a trilby and the Chelsea as a fedora, despite the latter’s brim being narrower.)

In the end, I chose the Borsalino. It has a noticeably broader brim than the Voyager and so is a departure for me, but I loved the shape elsewhere and the softness of the felt. Borsalino says it makes all its felt with wild rabbits rather than farmed ones.

I also considered a grey Voyager because I love the style so much, but with the addition of a broader ribbon – something Lock’s does cheaply and quickly.

A dark grey or black should be the default formal choice, rather than navy. Hats are more like shoes than suits in that way.

The Borsalino is a nice choice. I wear a hat most days, and rotate between a black homburg (from Bates), a brown trilby, blue trilby (both from Lock) and a tweed cap (also from Bates). I also have hats for gardening and walking… It is nice to be able to have varying degrees of formality and vary depending on the coat and suit I’m wearing.

Your opinion on the following conundrum will be very much appreciated.
At casual events I often wear a black melton knee-length DB coat with dark navy jeans and dark brown shoes, as black shoes do not go well with navy jeans IMHO. To cover the head, would you opt for a brown Voyager, such as yours, which harmonizes with the colour of the shoes, or would you go for grey instead, to avoid clashing with such a large swatch of black melton (the coat)?

Being a Lock man myself, I applaud the Borsalino, however I still prefer the trilby. My two from lock are also in Brown and Navy, which I find accommodate most casual and more formal needs. I also prefer the narrower grosgrain ribbon. My topper is also from where else, Lock.

I do entirely agree with you regarding the balance of wear. It makes an otherwise perfectly pieced outfit look affected.

For summer, I often wear my straw porkpie or “Sinatra” from Lock worn with the brim down front and back. Very stylish look and perfect at all times in warmer weather, casual and formal.

One thing I’ve never been able to appreciate is the look of a man in winter with a suit, gloves, and overcoat with a cold chill over his face from being hatless (and often no scarf). Or worse, the same outfit with earmuffs. To me, a hat finishes an overcoat or topcoat just as a suit isn’t complete without a tie and it’s the most practical piece of fashion wear that should have never gone away.

Absolutely! While I tend to think that a hat with a suit alone, and no coat, is anachronistic/archaic rather than classical/traditional, to wear an overcoat, topcoat or raincoat without a hat is incomplete and unfinished; and that usually gloves should be worn as well.

There is only one company to buy hat’s from which, in my opinion (and I have worn Borsalino) makes the finest hats you will find anywhere….Optimo Hats in Chicago.Graham and his team truly have no equal in terms of quality and service.

Luigi, either could work but I’d probably go with brown. More just because you are that casual with jeans.

A lining is, in my opinion, very practical in late autumn and winter. They do wear down eventually if the hat is worn often, but are also easily replaced. And looking at a lining in need of replacement reminds me that I’d rather have that soiling on the replaceable lining than the hat itself.

An unlined hat can also be an itchy affair for people in the stages of hair loss (i.e. me).

Simon, apparently in questions of individual taste a complete agreement is not something to strive for; on the other hand I am so used to finding your assessments very valid that in this particular case I thought I should inquire a little further about the color verdict: I have heard before that blue is not a classic hat color, just as most likely nobody would consider blue leather shoes (at least in a formal setting), but I wonder whether the analogy should really carry that far. To me the hat is just that much closer to the face, and the eyes in particular, and replacing a nice navy blue with a stark black just because that is the color somewhere down – I don’t know. Even more so as the usual overcoat is also blue, and it seems to be nicer to have an harmonious frame. With this said, I obviously agree that brown shoes should go with a brown hat, but that seems to be more of a casual setting anyway, as most hat browns I have seen are rather light.
Well, what do you know, I am about to buy my second hat as well, and since I already have a dark grey one (which goes well with everything) and have always found valuable food for thought on your site, I just felt it a good idea to see if there is something I completely overlook; who knows, blue hats may have been the rage around 1968 and so tradition (which I generally honor) says one dare not run the risk of being associated with carnival in a formal setting.
Regards
Thomas

Does a dark grey hat work with navy suits and dark brown shoes?
I usually wear grey suits with black shoes or navy suits with chocolate shoes. I also wear a navy single breasted overcoat. I am looking for a starter hat that works with both “uniforms.”
If not dark grey, which color hat would be most appropriate?

Dark grey is the best starting point. The next alterative would be a dark brown