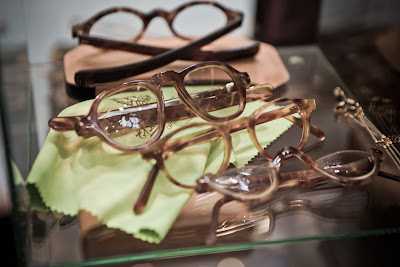 Having been rather taken with both the style and personalised service of EB Meyrowitz (see previous piece here) I decided to have a pair of glasses fitted late last year. The experience speaks of the expertise of Sheel and her sisters, but also of the difficulty in fitting straight-armed models.

The style I opted for is called the Starsky. Not that Hutch’s partner ever wore frames of this design, just that he was the general inspiration. You can see them in the photo above, second from top. They are a pale brown tortoiseshell (pattern) in a rather large scale. That combined with the rather square, thick nature of the frame makes them an imposing design, but they won’t necessarily be worn every day. Perhaps more accent piece than functional accessory. 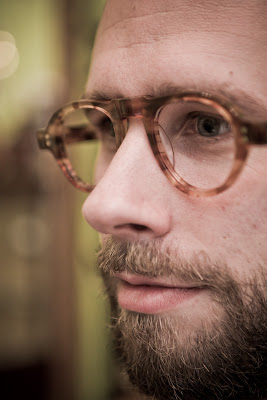 One design aspect I particularly liked was the straight arms – as opposed to the usual, ‘hockey stick’ arms that curve behind the ears. The only problem with this design is that it is harder to get enough purchase on the head, curving the arms snugly around the skull, without being uncomfortable.
There are a surprisingly large number of variables in the positioning of arms: the angle of the hinge; the angle at which the arm comes out of the hinge (both in-and-out and up-and-down); the curve of the arm at various points along its length (again, curve in/out or curve up/down); the twist of the arm. The first two Sheel had set for me according to her measurements of my face; the latter two we adjusted at least 10 times by heating up the material.
Now any optician should look at arm length etc and fit a pair of glasses on you. They will probably use exactly the same heat system. But I’ve never seen anyone take so much time and care over it – it has parallels with the care that goes into the designs and hand-making of the frames themselves.
The heat adjustments we did in two sessions a week apart. Sheel was anxious for me to come back to check again, and I feel guilty that I haven’t done so since Christmas. Very few people other than craftsmen care more than I do about these things. It’s a pleasure to work with someone that does. 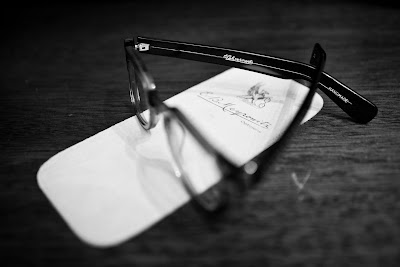 You can follow the discussion on EB Meyrowitz: First glasses, and fitting by entering your email address in the box below. You will then receive an email every time a new comment is added. These will also contain a link to a page where you can stop the alerts, and remove all of your related data from the site.