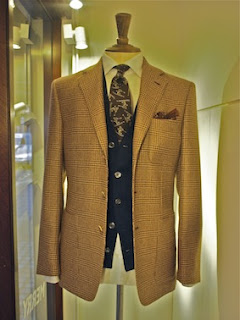 I always used to describe my style as how the Italians wear English clothes. Talking to Michael Drake recently though, (whose taste and sense of colour I respect immensely) I think the French might be a better reference point. The Italians are more obvious, because the dress is more consistent, but they also sometimes lack personality for that reason. Or personality is expressed through odd/trendy things like leather bracelets.

In reality, most of western men dress in English clothes. From the French revolution until the 1970s, English business and country dress dominated, with each country taking its own slightly different slant on the lounge suit and the hacking coat, the colours of city and country.

The Americans, as in many things, remained more English than the English. The Latin countries remained very conservative, but stylish nonetheless. The French, it could be argued, found the best combination of this conservatism and English eccentricity.

So to Michael Drake. “I think the French are often a little more understated and a little more chic than the Italians. Italians dress more like sheep; they all look the same. The French tend to be more individual.

“The French like that old English, school look. Even the Hermès jackets are very soft-shouldered, intentionally look very worn very quickly. The Italians, apart from Naples of course, are much more fitted, more self-conscious and deliberately sharper.

“You see men in Paris wearing a tweed jacket with an Hermès tie: it looks like an old schoolboy look but sophisticated with it.

“With colour as well, the Italians tend to be all navy and grey, or if the fashion is pink then they all wear pink. In France it is more varied, and consistently so. Look at the Hermès sweater collection – there are 25 colours or so in there, everything from lime green to orange. The Italians don’t, they’re too trend-driven. French are individual, perhaps even a little eccentric. 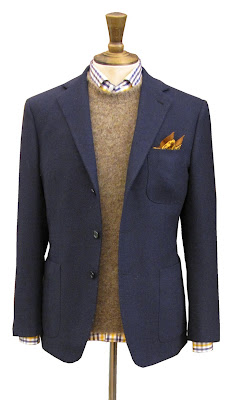 “Italians dress more like sheep; they all look the same”.

This is true,absolutly true.
I think that in average, Italians are better dress that French,but when a French is elegant is supremely elegant and chic.
French elegance is synonymous of Paris.
In Italy we have a Neapolitan elegance,a Milanese elegance,a Roman elegance,a Florentine elegance,a Sicilian elegance,a Bologna elegance,ecc..
Is very variegated,and often are more difference between a Milanese and a Napolitan that a Londoner and a Parisian.
Another Italian advantage is that bespoke tailors are still numerous and often affordables.
Said this…yes, French interpretation of English style is very sophisticated.

Great to see you on here, Sir! I have been unable to post on our other forum for a while as I mostly do so during my downtime during the day and at home do not presently have a computer (the ex wife took that). But I digress! I fully agree, both men and women, the Italians on average are better dressed than most others, but there is not as much of the personal touch, despite the wide selection of regional varieties. That said, the French on average, in my experience are not necessarily fashionable, at least the ones that I’ve met, but there is an underlying personality, an idiosyncratic jai nais se qua that cries out, even to the casual observer, a certain gout that is evident even if the individual in question is just stumping about their coffee shop making up my order in an old and apparently dowdy cardigan and ankle length skirt, or frumpy checked sport coat and work shirt. It is there, and I believe that that presence of personality based in the deeply rooted traditionalism of their culture despite the obvious and more vulgar consumerism of the large brands is expressed in the individuals on the daily. On that note, the most chic and tasteful woman that I’ve ever met is a French-Jewish lady who moved to Israel some years ago with her husband. I can never put my finger on it, but she’s always been an inspiration to me, despite the fact that obviously as a man, I would never wear anything that she does. She is a dear friend and excruciatingly tasteful. I do remember that most of her shoes are from the 1930s and that she wears a great deal of actual tailored garments, which for women these days, at least in Los Angeles, Calif., is an extreme, and lamentable rarity.

I like yr summary of the above, the Italians are more consistently, but when the French do it, they do it best. An interesting perception, to be sure.

On another note; Simon, I love yr assertion that the Americans have become more English than the English. I believe that this is certainly true. Just as many antiquated British accents and dialects have been preserved in various regions of the United States of America, due in large part to our cultural conservativism, I believe also that our national dress, as expressed in such things as “Ivy Style Dress”, are also heavily influenced by this national predilection.

I have greatly enjoyed this article, Sir! More, Please!

I’d also love an article on Riding clothing, if you ever have the inclination, or the opportunity. I am not sure if that is anything that you participate in, but I do, and would be fascinated with and excited about an article on the history and elements of this lovely pseudo folkloric and traditional mode of dress.

Have a wonderful day Gentlemen!

Thanks Evan, nice observation on female dress, particularly among the French

I don’t ride I’m afraid, so unlikely to do something on that

Two perfect examples of the blue-brown combination in the photos!

Which immediately reminded me of this very revealing blog post of yours:
http://www.permanentstyle.com/2008/05/odd-colour-combinations.html

Hi Simon,
What an interesting piece!
I agree with quite all you have written on this post! Interestingly enough, both jackets match my own taste! The navy one is exactly the kind I desperatly need to add to my wardrobe. Good to know that Agnès B. are going to sell them here in France. I only hope that they won’t be out of my financial reach! Now, the one thing that surprises me on this post though, is that my type of style were “old schoolboy”! Yes, tweed and glen plaid jackets paired with Hermès and Drake’s ties are the kind of outfit I prefer! Only recently, have I started thinking about changing pace by adding flannel to my usual 14 wale corduroy trousers. To start with and following your advice, Simon, I have been looking for, at least, one pair of mid grey heavy flannel (cf. piece on matching texture and color). But what a real headache looking for them in Paris! Frankly, I have come to think that perhaps this kind of stuff is simply not produced anymore.

Hi John – thanks for your comments. Agnes B are not about to stock these jackets though. Michael is referring to when he first started, over 30 years ago, and he is referring to ties and scarves, not jackets.

OK! As a matter of fact,it was surprising to me. I would fairly think of the Parisian “Old england” instead as the right place for these kinds of products, even though Drake is obviously moving within a group of bold British craftsmen who are now on the verge to make up a new generation, and yet that is so far rather individually confident & assertive. I am not sure whether indeed they are fully aware of belonging to this wave whose main feat will sooner or later be translated as “the Brits are back”. Think of what Eric Musgrave once wrote about the Craftsmen at Northampton to understand what I’m getting at. Due to your very keen eye, perhaps you, Simon, could be helpful to them all and to all of us. I say this because the world deserve – yes – products made by outstanding craftsmen, no matter where about they are from! It just happens that for specific products, they have been crafted by Brits!
John

Thank you Stephen, I’ll pass tour best wishes on to her!

Partly, yes. There is always that extra level of hassle, and the fades on my sanforised were great. Still, it would be nice to try them sometime, perhaps from Brycelands

Hi Andy, glad you enjoyed the piece. I love that we can create personal codes for our clothing with colours that resonate with us in different ways. In the past whenever I felt like I needed a boost of confidence I'd wear predominantly navy blue,…

Perhaps, yes. I think always best to consider it in the whole though - what you feel looks right, rather than being too numerical?

Rayon shirts, and tucking in or out 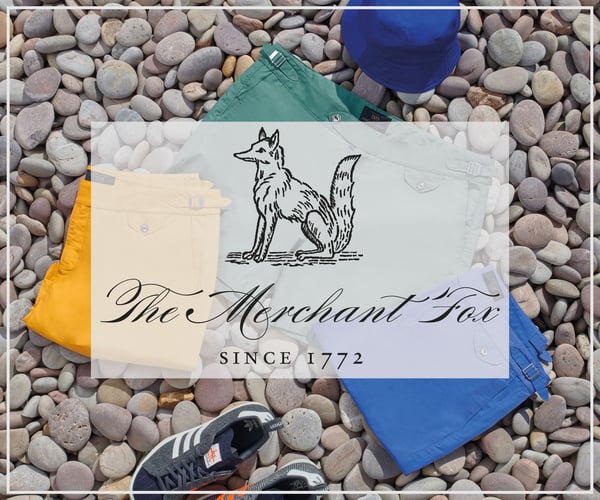 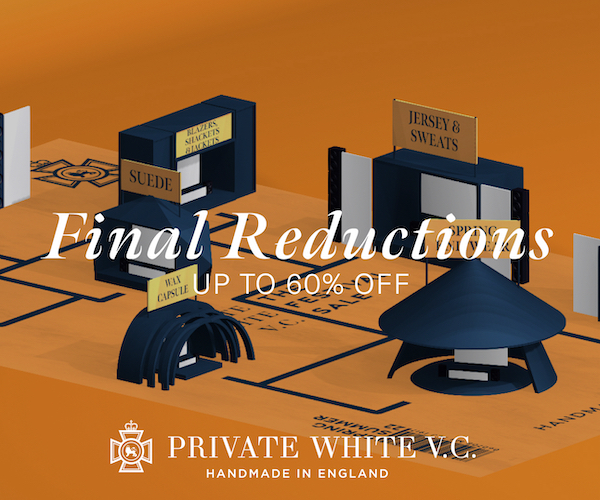