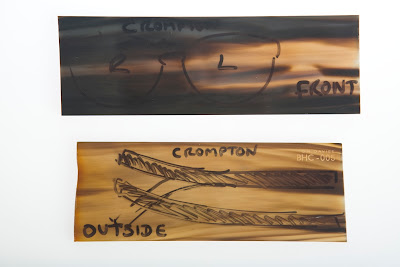 It’s taken a while to get round to writing about my glasses from Tom Davies. Partially, that was because it took a while to have them made. I was a guinea big for the bespoke service for horn glasses, and as with any new service it took that big longer to perfect. Partially, it’s my own laziness.

Tom initially planned to offer horn glasses in any of the designs in his collection. Customers would simply pick out a pair of glasses they liked, select a slice of buffalo horn from a range of colours and then trace around that collection, frame, indicating exactly which parts of the horn they wanted on which parts of the frame. Same with the sides. 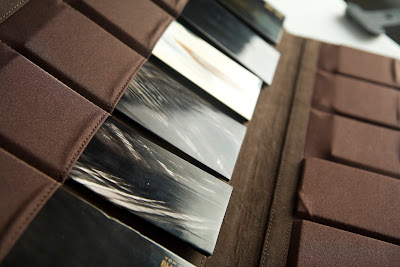 Unfortunately, horn is essentially always trying to return to its original shape, to straighten up if bent. This isn’t a problem on the flat front of the frame, but the design I picked involved curved ends to the frame, where it would segue into the joint. Any tiny change in the horn on that curve would be immediately noticed at the end of the arm, moving it out from the side of the head.

Tom has refined the process, therefore, and only certain designs are available in the buffalo horn range. More importantly though, Tom is unique in offering this service, particularly the choice between a selection of horn pieces, and it’s great to be involved in that aspect of the design. The glasses also come in a large, attractive box made out of buffalo leather. 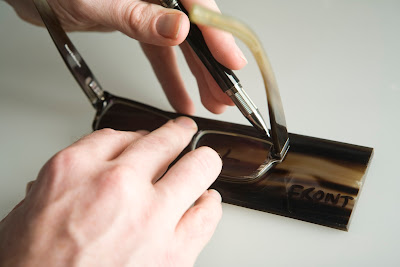 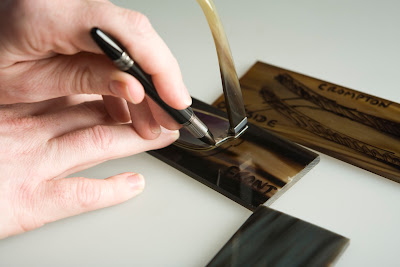 Tom’s designs are rather different to other glasses I have written about – EB Meyrowitz, for example. Tom tends to the squarer, the slightly larger frame, which is perhaps likely to find favour among younger men. Such should be obvious from his website.

But as with Meyrowitz he can create new frames, usually based on an existing style that is adjusted for the wearer’s dimensions. One obvious difference is that Tom takes photos of the customer and sends to his factory in China, which sends back suggested proportions superimposed on the customer’s face (as shown below).

My glasses from Tom were, as you might expect, still rather classic. But the horn adds a different texture and the design process was fascinating. Sorry it took so long to report on. (I picked the design on the far left.) 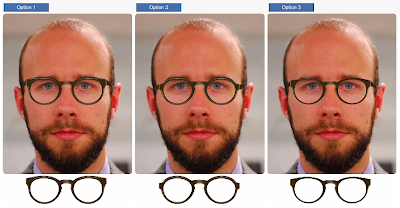 You can follow the discussion on Tom Davies horn glasses by entering your email address in the box below. You will then receive an email every time a new comment is added. These will also contain a link to a page where you can stop the alerts, and remove all of your related data from the site.