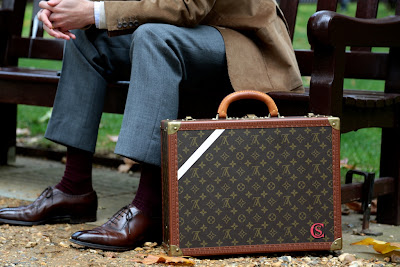 This is a shot from a feature coming up in The Rake next year – on the VIP painting service at Louis Vuitton.

I love my Alzer case. Hard-sided cases are one of the few things made by hand by Vuitton, at the old Asnieres facility in France. The skill is in making the wooden frame and the tacking along the leather edges, rather than hand sewing as you would have at Hermes or Dunhill (London range). But the handle is beautifully hand sewn and inked – and made in the signature Vuitton leather that is untreated so it ages very quickly.

The hand painting on the Alzer mimics a design used for Sacha Guitry on a set of luggage he had made in 1927, which was deliberately different in its diagonal stripe.

The first half of this video shows the making of the hard-sided cases:

Goyard does lovely hand-painting service too; and they’re a little more under-the-radar than Louis Vuitton.

True, their work is very good. Since they relaunched though prices have gone up rather. The designs never appealed to me that much either.

Do you have any pieces? How do you find them?

Design and print are a matter of taste but I do get a certain satisfaction from owning something without the ubiquity of the Louis Vuitton monogram (their Epi range is another matter).

I only have a Goyard credit card holder in a rather daring orange – the overly large monogramming (a mistake) has fared rather better than the corners of the card holder after a couple of years of good service.

Living in Paris I have been a Goyard fan for the past 6-7 years. Yes, their prices have gone up and they are not as much “under the radar” as they used to be. Personally I prefer to find a small, independent maker rather than LV or now, Goyard or even the newly relaunched Moynat.
I started with a classical wallet which I had monogrammed a few years later. Then I got a large “Boeing” weekender bag and offered a wallet to family.
The hand-painting is very good but they made an error on my “Boeing”, thus leading to getting offered a brand new replacement which was very generous on their behalf.

Generally I would not buy them anymore, my taste has changed, but I consider their products very well made and beautiful.

what was the thinking (or was it accidental) behind having the LV print upside down (or at least the opposite orientation of the monogram, though it seems to me there is no way to use or hold the case that would have the LV right way up)?

The monogram flows round the case, so it’s the right way up on the other side

Have been abroad so am greedily checking up on what i have missed – some very nice articles i hasten to add.

I think i may appear the only odd one out here but, the suitcase is to me rather ‘bling’ and therefore cheap looking.

I believe the problem with such items is the fact that they have been copied so well by many far away places and sent here in their thousands (to satisfy the appetite for those with no money but want the bling) that they have lost their appeal – to me anyhow.

I do not question the quality as i know it to be excellent, it is just that look of ‘over advertsing’ who manufactured the object. I have never been a fan of being a ‘free’ advertiser for any items of clothing and accesories – their logos distract from the beauty of the object entirely, particularly in this case as it is rather too bold and too obvious. To me it rather smacks of new money i am afraid to say. Nothing is better than old style subtle elegance.

Sorry – but there you have it.

On a more positive note, the shoes and socks and trousers are a wonderful blend of colours – very nice indeed. I am also rather taken with the jacket material but cant quite make it out. Cordurouy?

Thanks Bradley. I know what you mean. It does age beautifully and look very different to anything fake, but point taken

A very very good choice for the color of your socks! Grey would have been a notch down on the elegance scale!

Hi Simon,
Recently came upon your blog and cannot do anything else but read all the posts I have missed over the years. Quite an undertaking.
Re. your Alzer: I as well love the Alzer. I agree with another correspondent that the logo and free advertising would make it hard to for me to use this piece however. Can it be made using less obvious covering? I wonder what the options are?
How useful do you find this case? I am assuming it is a brief case. Do you find it heavy to use on a daily basis or when travelling? Alzer cases are such wonderful objects, I just wonder how practical they are to carry around.
Now for more reading,
J

I use it when travelling mostly, it is heavy but then so is anything in leather.