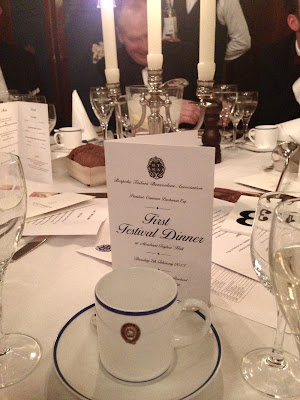 Thursday was the first Festival Dinner for the new Bespoke Tailors Benevolent Association. The new incarnation of the MTBA dinner, it was notable for two things: the brevity of the speeches, much to everyone’s relief, and the guest speaker Adrian (AA) Gill.
I’m sure many British readers will know Adrian’s writing, and he’s been a customer of Anderson & Sheppard for quite some time. But most of the tailors present didn’t know the name, and they were a little surprised by the speech, which didn’t shy away from poking fun at Savile Row.
The tailors should be congratulated, he began, for the gentleman’s suit was the one unequivocal thing England had given the world and continued to lead in ever since. If a dictator anywhere in the world really wants to look the business, really wants to look like a bastard, then he comes to Savile Row. “The Row has dressed more bastards than anyone else. Together it’s probably done more to put back the cause of human rights than any other group in the world,” he said.
The Huntsman table found this particularly funny, leaning over to colleagues to highlight one customer or another. The next line didn’t go down quite so well though. “You should pat yourselves on the back. Or if you’re in a Huntsman suit, get someone else to do it for you,” Adrian said, miming the actions of man extremely constrained in his movements.
Most of the anecdotes concerned Adrian’s time working in a men’s shop. The selling techniques there included taking any jacket that was a little too small out to the ‘shoulder stretcher’. This was not the modern piece of machinery it was portrayed as, but rather “just putting your knee into the shoulder of the jacket, and pulling on the other side until you heard the lining crack”.
The best anecdote, however, was one relayed to him by a Savile Row tailor with an Indian customer who never wore any underwear. “We used to draw lots as to which one had to go in there and do the fitting,” said the tailor. “Retaking the inside-leg measurement was a delicate matter.”
“In the end I bit the bullet and went in one time. He was standing there in his shirttails and I said ‘Sir, may I just say that that is an extremely fine penis’. He became a very good customer; we’re still dressing his grandchildren.”

Thanks for the laugh, sounds like a lot of fun.

AA Gill often looks really good when photographed for his Times pieces. I love his writing. His restaurant reviews are regularly the only thing worth reading in the Style supplement.

When he mentions clothing in his writing he is one of the few writers who talks about the cultural implications of wearing different items. He’s criticised several television presenters for not dressing in a way that communicates that they care about what they are doing. He also has a particular dislike of the panama hat, which he thinks is a colonial costume accessory. I think the Mr Porter magazine interviewed him about clothing once. I’d really like to read an interview where he talked about how to wear classic menswear without becoming a caricature.

Interesting, I hadn’t read that. I agree on television presenters, though not so much on the panama!

I’ll ask him if he’d consider a full interview.

I agree; AA Gill is well worth interviewing. Clothes as culture is a topic too rarely mentioned. Great add, AP!