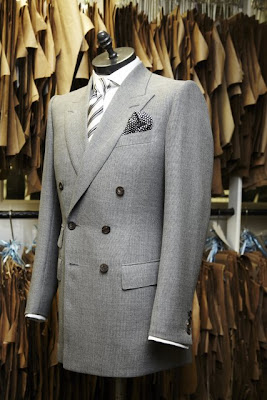 Gieves & Hawkes has always had a good bespoke operation, and surprisingly large on site, but it gets relatively little press. A definite bonus has been Davide Taub, who joined from Maurice Sedwell recently to become co-head cutter alongside Lee Webb.
Davide is an artist, a trained architect and a truly original cutter. (Check out his tulip overcoat.) Lee is more conservative but technically excellent, and both trained as tailors before they were cutters, which gives them a particular view on the tailoring process. Since Davide joined there have been a few obvious changes, such as the removal of the auto-padding machine. It was never used much, but getting rid of it was symbolic. Everything will now be done by hand.
Between them, Davide and Lee have also been developing a new style for their jackets. Not a house style, as this will never be something that is a default setting, let alone thrust upon customers, but a new and individual cut of jacket that should help to give an identity to the Gieves operation. 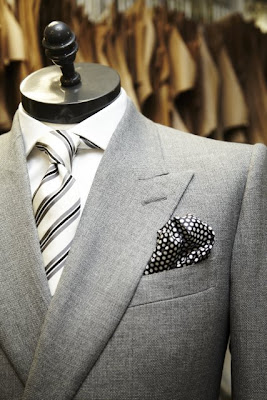 One of its identifying features is a soft shoulder, using a pre-made pad but cut down by hand to thin out the neck area, giving a subtle kick at the shoulder. Not a pagoda shoulder by any means, but something that suggests breadth in the same way as a Cifonelli roped sleevehead.
The chest is cut close, with room at the front but very little at the side, leading to a long line down the side of the jacket. The canvas is darted a lot to push the chest forward into that shape. “When I started I used to cut all my jackets skin tight,” says Davide. “I’ve changed my mind on that, but I still think it’s very flattering to have it close under the arm, up into that small armhole.”
Lastly, the sleeve is quite narrow but with a rather rounded sleevehead. Sometimes a slim sleeve can create a point in the sleevehead, which makes the piece seem two-dimensional, as if only conceived on paper. 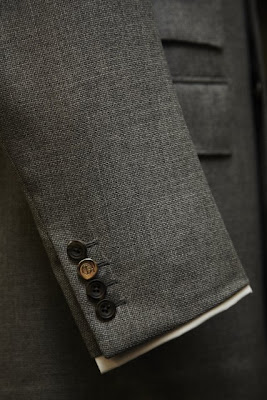 Hopefully the imagery here gets across some of these aspects. Something in me also really likes the mix of brass and horn buttons on the sleeve, but I can see myself changing my mind on that in two months. Perhaps just on a one-button (brass) navy blazer?
There are also positive developments with Gieves ready to wear, finally. Jason Basmajian, ex-Brioni, is the new creative director and ran me through his plans recently. The quality of the suiting will be much higher and there are some nice design aspects already in the Autumn/Winter 2013 collection – such as side tabs on the trousers that sit on the seam rather than the waistband, which I prefer. Look out for nice belted overcoats and shawl-collared waistcoats on the suits as well.

G&H’s attitude toward tailoring is the most forward on the ‘Row (that I’ve found). It seems like every tailor worldwide throughout the 2000s who cut an extremely clean chest (me includedy has started adding ease to the chest to “push it out”. Not only does this prevent pulling on the front of the top sleeve, but it is more comfortable without sacrificing cleaner lines.

I will stir a little controversy by stating that finishing your tailoring education before cutting is FAR better for the final product than pure-bred cutters. In fact, in most drafts there are qualitative elements such as “when making up, add fullness here”. Etc.

Although the cutter is seen as the boss (which they are) if you cannot communicate effectively to your team, the client suffers.

After seeing so many Neapolitan jackets on this site, the shoulders on this G&H jacket resemble a stacked piece of armour! Would you agree that it is difficult to return to Savile Row tailoring after having far ‘softer-shouldered’ jackets made for you?

Cifonelli makes some incredible double breasted jackets! I am generously muscled, especially in the shoulders, so the padding helps me resemble a menacing doorman. Definitely not permanent style…Actually, would Neapolitan tailors be the best bet for a jacket without any shoulder padding whatsoever?

Cifonelli has a lot less padding than most Row tailors. There’s a DB herringbone cashmere jacket on here somewhere of mine, which I love. The roping adds width, but not the padding.

The shoulder padding in most Neapolitan jackets is as little as makes no difference. I wouldn’t recommend none at all, unless you really want a shirt jacket. In which case go to a shirtmaker.

simon its been interesting to follow your progression through using various tailors, you say youd have casual jackets made in naples now, is this because you feel it represents a more relaxed aesthetic and is more comfortable to wear?

its a bit sad that after using various tailors on the row youd now decide to go to italy for casual wear & paris for suiting in an ideal world, does this represent some disappointment in english tailorings offering?

Not really Raj. One of the problems with online discussions is they exaggerate the differences between tailors. Most are very small and largely matters of taste.

If I started again I would go to Naples and Paris to begin with, but I am extremely fond of my A&S DBs, my Henry Poole and several others. If I had a wardrobe of a dozen suits, I would end up returning to most of them, for those little varieties in taste

thats interesting, thanks simon. sounds like you lean toward soft tailoring as i do ..

on another note, i have a need for a cream trouser to wear with a jacket and tie .. wondered if you had any suggestions for cloths that would work well apart from a cotton twill?

It depends on the jacket and weight, but try wool gabardine

thats interesting, thanks simon. sounds like you lean toward soft tailoring as i do ..

on another note, i have a need for a cream trouser to wear with a jacket and tie .. wondered if you had any suggestions for cloths that would work well apart from a cotton twill?

A Man In Mayfair

Gents, surely the true art of tailoring is about structure, line, concealment and enhancement? It seems to me that true tailoring gets a hard time these days from the very people who claim to support the industry.

Soft, unstructured jackets can never hope to compete with traditional tailoring in how they transform our squidgy physiques into chiselled perfection!

If you don’t like structure then why are any of you here?

Anonymous
Reply to  A Man In Mayfair

Completely agree, also is that style not more ‘Permanent’? Also in my experience letting Savile Row experiment with softer cuts can be very rewarding, rather than outsourcing across the Channel.

In the last paragraph you mentioned preferring trousers with side tabs on the seam instead of the waistband. I’ve never seen this. Does this mean the side tabs are below the waistband or somewhere else, I’m confused without a photo.

Also, why the preference? Are they more effective?
Thanks,
Tim

Have a search on the site – I’ve talked about this a fair bit. The tab sits half on the waistband, half on the trouser, so the seam runs underneath the middle of it. Every pair of A&S trousers is made that way, as well as a few other places.

It’s slightly more comfortable, but more importantly I like the fact that it means the trousers sit around an inch higher on me.

Hi simon, do you know any tailor that make the same new style between Lee and Davide? and can Chittleborough and Morgan make the same style with their jacket?

Chittleborough can make something very similar, yes. Worth going in and having a conversation. The other one worth trying in that area is Edward Sexton

How about Italian tailor? can they make something similar style of jacket? i thought that maybe the Caracenis can make it

Can they make a gilet like this you mean? They tend to be less creative, at least old houses like the Caracenis, but I have heard that a few houses particularly in Naples, used to make them. So yes it’s possible – I’ve already raised something similar with Caliendo

Simon, I realise that the post is old, but I hope this question does eventually reach you. As I understand, the highly pronounced, perhaps one could even say exaggerated roping on Davide Taub’s jackets is a part of this style that you write about. Would Chittleborough & Morgan be able to replicate that structure or would it go against their house style?

No, I’m sure they could do something similar.