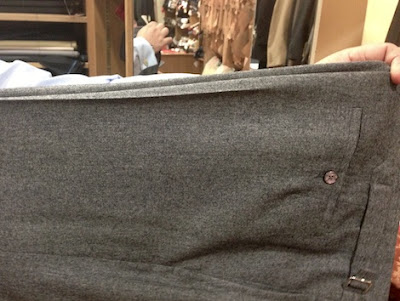 Suits should not be dry-cleaned very often. For some I know on and around Savile Row, that means once every six months. For others, it means never. The exact amount, of course, depends also on how often and in what manner you wear your suits.
When they do need to be dry-cleaned, it can be a struggle to find somewhere decent. Dry cleaning will damage a suit – it is being washed around in a tub of chemicals after all – but far more damaging is the pressing afterwards. Most dry cleaners use a big Hoffman press to stamp the entire garment flat. That’s fine with a T-shirt, but it can ruin the collar, shoulders and chest of a suit – anything, essentially, that is three-dimensional and is suddenly being reduced to two.
The better dry cleaners can hand press a suit. One of them is Jeeves of Belgravia: probably the best-known high-end chain in London. As an experiment, I gave them an Anderson & Sheppard flannel suit last week and asked for their best possible service.
The results were mixed.
The chest and shoulders of the jacket looked very good. More importantly, when I put it on, the jacket felt the same as it had before. Just cleaner.
But it had been cut as a three-roll-two, and Jeeves had attempted to press it as a pure three-button. They hadn’t forced it: the lapels still had their natural roll. But there was evidence of an attempt to press them shorter and higher, at the first of the three buttons. The collar had also lost a little of its shape.
Also the trousers, disappointingly, had been pressed flat. This was obvious from the two creases up the back: the original crease and a new, sharper one from where the trousers had been folded in two and placed in the machine (as shown at top).
Overall, it wasn’t a bad job. Much better than the average high-street cleaner. But at £45, I had expected more and I will take any future jobs to Burford Valet (who I wrote about last year). As they don’t have shops they are not quite as convenient, and are more suited to doing several suits at once. But at £30 per suit they were cheaper and better.

In Sydney there are only two dry cleaners who can be trusted – 2020 in Mosman and No D-Lay in Rozelle. I can happily recommend either. No D-Lay is a little cheaper.

Toronto’s best is Dove cleaners (having a digital database that will be pulled up with your pre-set preferences, eg: “don’t crack lapels too hard”). This use of basic tech (dos, haha) is long overdue.

Another is Creed, but I haven’t tried them as of yet.

Thanks guys, all very useful. Specific feedback on hand pressing would be great too

Any leads on good places in New York City?

Not personally. Anyone else out there? Feedback on hand pressing in particular please.

Jeeves in New York on 65th Street has two services for gentleman’s suits. One is a machine clean and hand press and for bespoke suits, a service called the “perfect suit”, which the suit is cleaned by hand and not subjected to a machine. The price for the perfect suit is $142.50. Jeevesny.com

Interesting, so there’s a hand clean, effectively the ‘sponge’ in sponge and press, as well? That doesn’t seem to be available in London.

Hello.
This may sound insane to most people but I wash my suits myself in the bathtub. Just cold water and some gentle soap. The pressing is rather tedious and one time I had to fix the lining in the sleeves because in shrunk, but they do get very clean. Try at your own risk…

Meurice and Madame Paulette are well regarded places in NYC. I have used Meurice with good results. Their skill in getting stains out of silk and linen suitings is remarkable.

@mack11211 – I am a devoted Meurice customer and bring all of my Purple Label things to them for light pressing or a proper cleaning. They have done a excellent job for me and I trust them completely.

Oops, forgot to add that Meurice does beautiful hand pressing when requested.

This an instructive post about a very very serious matter…
Frankly, I wonder why is it so hard to find excellent dry cleaners. Yet, I assume that in any good city there is still at least one that is wellknown – at least by women! – and indeed really trustworthy as the “Parfait élève de Pouyanne” in Paris.
Peter

It’s not the standard of dry cleaners, but rather the hand pressing that is difficult to find. And that’s because there are very few men with bespoke or even high-end structured suits.

Simon How would you recommend to maintain (numbers of dry cleaning) a suit in tropical weather.It’s humid and your suits are stains with sweat.

I think you need to find a way to avoid sweating into the suits. That’s never going to be good for them. Perhaps an undershirt under your dress shirt? Or some makers used to put ‘sweat guards’ under the arms – extra pads of material to soak up the sweat. A lot of the Asian tailors still do that.

I remember you had mentioned in a post that a Savile Row tailor provides a seasonal sponge and press to it’s customers, which infact is built into the initial cost of the suit – why then would you consider using Burford Valet or a dry cleaner? Isn’t the quality of the tailor’s service good enough?

This may sound like a silly question to some but, as I mostly wear denim and sportcoats I was wondering how does one go about cleaning their suit’s pants? I don’t wear suits often so I don’t worry about smells, etc. with the jacket but, what about the pants? Are they safer to take to a quality dry cleaner or should they be cleaned at home? Thanks!

Dry clean! Unless they say they are machine safe, in which case you need new pants.

I had Jeeves sponge and press Gieves & Hawkes made to measure suit a couple of months back and was pretty satisfied with the results. The only caveat is that since the suit came back, several bristles from the canvas are now beginning to really poke through the top of the jacket’s shoulder pads (although it is hard to tell whether this is purely because the 2 year old suit has generally aged badly – it was happening to a limited degree before I took it to Jeeves – or whether the press has exacerbated things).

Simon. Why Anderson and Sheppard do not possess the royal warrant of the Prince of Wales if they make his suits ?

It can take years to have a royal warrant awarded, and many people that make for royalty don’t get one, as the number is also very limited.

Smedley just won one, after a long time of making for various members of the family.

I have a Vivienne Westwood haute couture outfit that needs cleaning. Can you recommend a dry cleaner in Cheshire/South Manchester or should I take a trip to London to have it cleaned? If so, where would you recommend please?

Hi Julia, I can clean your VW haute couture suit on its own and finish it to the highest of standard’s. I offer a secure and safe postal service. you can reply here or on linkedin
regards
Michael

I recently started buying products from the Laundress, a boutique operation out of New York that got some coverage through the “In Good Company” side of J. Crew’s business. They have all kinds of shampoos and detergents, including ones they claim are perfect for Cashmere or Wool jackets and trousers. They are certainly talking about using them with high-end clothing as one of their videos shows a woman cleaning her Chanel suit in a regular washing machine (albeit thrown in a mesh bag first). I’m a little reluctant to try the products out on my tailored trousers, but the company claims their products are safe even on clothes with labels indicating “dry clean only.” Any knowledge of this company or idea of whether suit trousers can be washed in a machine? The website is http://www.thelaundress.com/

Yes, I use their products (Kirby at the Hanger Project sells them and Smedley relabel them for their knitwear cleaning products). I’d never recommend machine washing suit trousers though

Russell Cleaners in Toronto on St. Claire W. are the only cleaners who can hand press a suit I am aware of.

Simon, have you heard of the “Swash” system that has been launched recently? Any thoughts on testing it?

On a larger front, perhaps it is time to revisit the entire cleaning/maintenance topic, with a particular eye to the fact the a larger and larger portion of your readers, do not live in the few metropolitan areas which have “suitable” cleaners..

Everyone can recite the basics of shoe care : 1. Don’t wear a pair two days in a row ; 2. Always insert shoe trees when not wearing ; 3. regularly brush, cream and polish your shoes, etc.

However, there does not appear to be a similarly recitable regimen of fine clothing care, and cleaning.

And I repeat, this can be made more difficult if there is not a quality cleaner that is convenient.

Thanks, and that’s a good idea.
Brushing and steaming is it, essentially…

I agree, handmade suits either half or full canvassed should not be drycleaned so often. These handmade suits have to be cleaned and particularly hand pressed to original shape by a highly experienced presser.
At Rocha, not only we have very experienced pressers , but also whom myself was an ex-graduate from Central St Martins in fashion in the 90s, and now managing the specialist drycleaned and bespoke suit business in Rickmansworth. I personally hand pressed all the handmade suits that come into Rocha and guarantee the original shape to be retained.
Please visit us to try .

Revisiting this thread. Any additional recommendations for dry cleaners of tailored clothing based in London? I’m particularly interested in getting my trousers cleaned.

I’ve tried Burford Valet but are there others you would now consider?