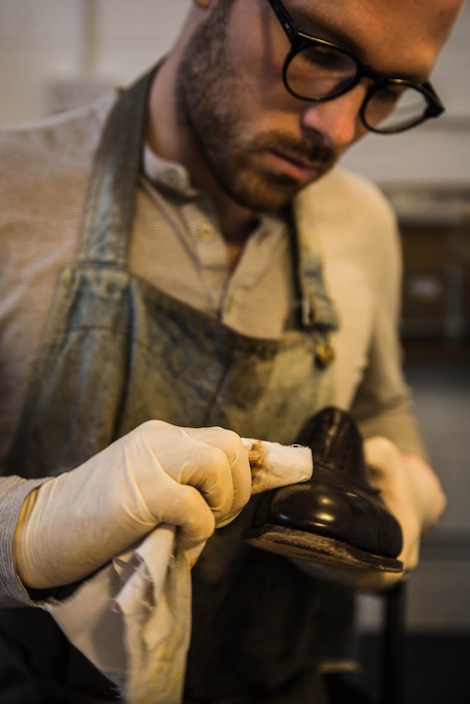 I love my brown Cleverleys – the first bespoke shoes I owned – but I’ve never been that happy with the colour. Cleverley are good at many things, but patination is not one of them. George Jr has looked at introducing a patination service, but it’s not something that’s readily available yet.
I was thinking this while talking to Deborah Carre of Carreducker recently, and that led to a discussion of how one could do a little repatination oneself. Taking the surface of the shoes off is fairly easy – using a deglazer – and then if a polish is used rather than a dye on the exposed shoe, the effect is subtle and hard for a novice like me to mess up.
Nonetheless, we decided it would be best to attempt this first under close supervision. So Luke Carby (pictured, top and I went up the cosy Carreducker studio in London during one of their shoemaking classes, and tried repatination under Deborah’s watchful eye. 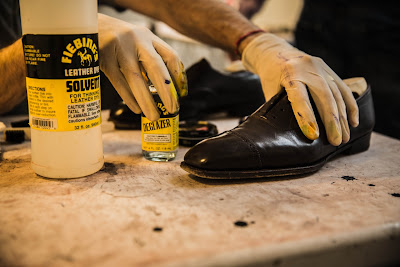 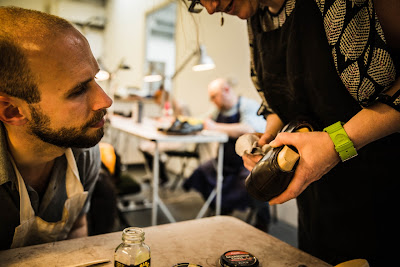 Getting the surface of the shoe off is fairly straightforward. A few swirls of deglazer and the surface turns matte and slightly muted in colour. We repeated the process two or three times until that process was thorough: on the heel initially, as that is less prominent, and then on the toe.
Then we worked in a few layers of black polish. In streaks to begin with, to get enough on, and then swirls to work it in. Each layer was left to dry for a minute before another was applied. Luke worked on one shoe and me on another – though we swapped halfway to avoid a difference in the patination ‘style’. 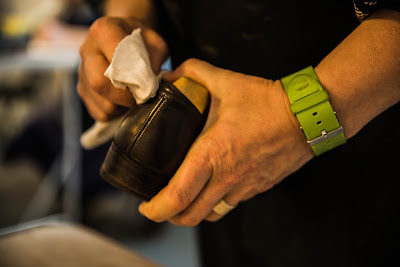 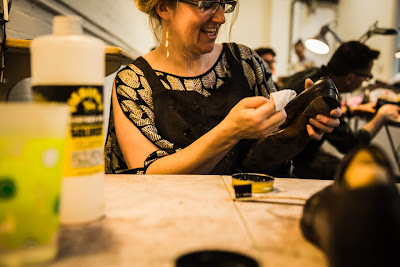 Once complete, we used more polish and some water to work them up normally. The result was subtle, but definitely noticeable. There is a definite difference between the cap and shoe, and a slow gradation at the heel. A close inspection reveals one or two of those streaks as well.
My only regret was that I didn’t also do some around the laces. But I’ve bought my own deglazer now, so this could be the start of a dangerous trend… 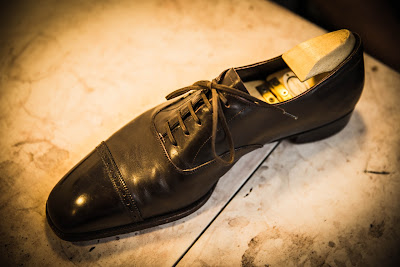 You can follow the discussion on Repatinating shoes with Carreducker by entering your email address in the box below. You will then receive an email every time a new comment is added. These will also contain a link to a page where you can stop the alerts, and remove all of your related data from the site.

Yes - it's available on the shop site now.

Recently I discovered that a polo cashmere cable knit sweater I own was covered with moth holes. Professional repairs would have cost many times the original price of the sweater. I decided to repair it myself using some very thin “invisible thread” I happened to…

Dear Simon, this was a very helpful answer indeed. I have the feeling that all these are relatively short to the length of jackets in the 70s-80s and 90s. I feel jackets used to be larger in chest and definitely longer. R.A. has posted a…

Hi. Thanks, pleased you like it. I wouldn't say the rule should be disregarded necessarily, more that it is something to understand and be aware of, rather than follow all the time. As long as you're aware that the two can look odd if they…