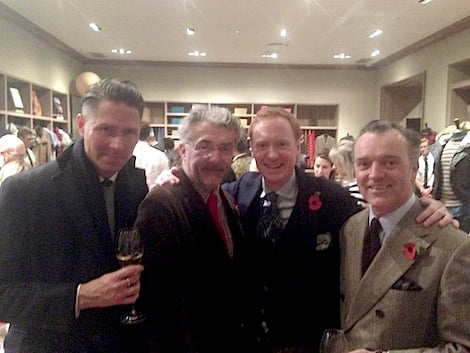 Last night there were two store opening parties: Kent & Curwen on Savile Row and J Crew on Regent Street. And while neither will get fans of luxury menswear that excited, there were good things at both for those on a budget.

K&C might not seem that original in its flannel suits and cream trousers, but then readers often ask where they can get a good pair of grey flannels, and I now have somewhere to reliably point them to. Equally, J Crew does preppy menswear better than pretty much anywhere else currently in London, and there’s a reason their shirts have been so popular since Trunk started stocking them.

A mix of both affordable and bespoke would be great! After all you did start to review a suit that fits etc when you started out, you are an expert now due to luck and practice, you started out on a more affordable tangent. Obviously the focus is now bespoke but say a short article a week on affordable dressing would be very much appreciated!

Thanks, I do try but will try harder!

Thank you for your constant efforts

hi simon, would it be possible to review other sorts of bespoke makers please? I have found this lady who makes bespoke willy warmers, would you be able to review please? http://bayourenaissanceman.blogspot.co.uk/2012/04/warming-more-than-cockles-of-ones-heart.html

Of course. Anything in the name of research.

Simon, is there any specific items at J. Crew you recommend? I live in US but I assume they sell the same stuff. I remember Derek at Put This On recommending their Bowery chinos.

Given they’ve just opened, I haven’t tried anything yet. But yes, it looks similar to the US

Simon – Perhaps you overlooked Ralph Lauren’s Polo as having preppy menswear? Unless you feel differently, I think his is pretty much the best. Perhaps a bit less quirky, but certainly preppy….

True. Ralph is almost more Ralph than trad now though! He’s his own world

It’s a shame K&C doesn’t have an online facility to purchase their clothes. I think they are missing a trick, as they say