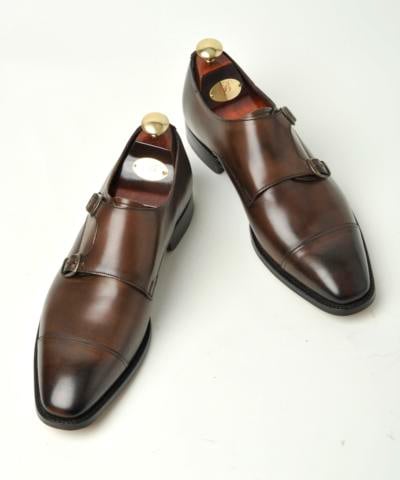 About four years ago I did a series of visits to Edward Green, which were reproduced in The Rake and in the How Great Things Age series here on the blog. One of my favourite people I met in that time was the head pattern cutter, John Garner. John had a peerless reputation in Northampton, but unfortunately retired from Edward Green two years ago.

Like many people who are passionate about their craft, John found that retirement didn’t entirely suit him. It’s hard to go from running one of the best departments in the shoe industry to dallying quietly at home. So last year, John took up the opportunity to help design a range of shoes for Sarah Dudley, who owns Bodileys.

Bodileys is an old Northampton name, having been set up as a shop in 1919 and helping establish manufacturer George Webb & Sons in 1927. For over 50 years, it was one of town’s leading shoe retailers, before moving into exports and later online sales of Northampton brands. 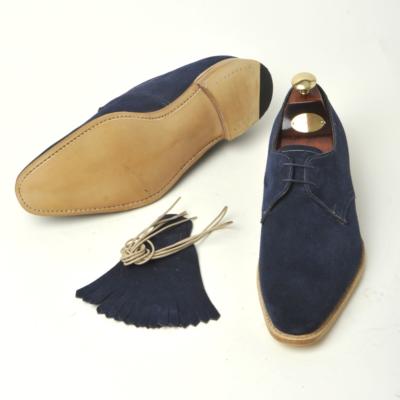 Although it still sells other people’s shoes, Sarah (the fourth generation of the family) has moved Bodileys towards creating its own brand. The latest line, made by Cheaney but with the invaluable oversight of Mr Garner, is called the London Collection and retails for around £345.

I have seen and tried several pairs, and John’s contribution is obvious. The elegant, understated last shapes are very reminiscent of Green, and the make is also a big step up on regular Cheaney’s. Tell-tale points like the transition from the sole to the heel on the side of the shoe are smooth and clean.

“It’s been very rewarding to oversee the production, to be able to tweak everything from the lasts to the finishing, but without the day-to-day headaches of actually running part of a factory,” John told me when we met a couple of weeks ago.

At that price they will certainly be healthy competition for other mid-priced Northampton manufacturers, such as Crocketts.

The pictures you posted don’t do the double monks full justice. I went to the web site and had a look at that model (the “Markham” – http://www.bodileys.com/shoes/monk/markham-dark-brown-calf.html). The soles look, at least from the pictures, to be a match for G&G or EG Top Drawer. Sadly only available in a standard width and I have issues with narrow heels even in narrower widths so I doubt that I’d get a good fit but I’m amazed, again judging only from the pictures, just how high a quality they’ve managed to get at this price point.

Thanks Julian. I wouldn’t say they are the equivalent of G&G or Top Drawer, having seen them in person – perhaps the painting of the soles is slightly misleading in that respect. But still a step-up on anything in the same price bracket, absolutely.

It would be great if they could expand their collection a little bit.
It is astonishing how the shoemakers in Northhampton are able to produce whatever shoes one wants!

Love your site. Do you have any plans on doing a new colaboration with John Smedley? Your previous ones have been truly amazing. As I am a fearly new reader, I didnt get the chance to order any of the previous.

Hopefully later in the year, yes. Also hoping Smedley will stock some of these models in their A/W collection

Are there any other projects in which you believe you could have a helpful influence in RTW? Obviously beyond knitwear, is there anything to be desired in accessories, shoes, shirts, ties etc etc that you feel like you could help out with? There must be something else!

I have taken on projects slowly whenever I have felt there is a genuine hole in the market – I find that more satisfying than faster retail. We have done ties, slippers and cufflinks before though… Check out the collaborations page in the footer

These are great shoes but I have found with the Lyndon II (double-monk) that these are quite large sizes. I take a 10 or 44 in just about every other shoe make, but the 9.5 in the Bodiley’s fits me perfectly. So best to size down by a half.

No problem. As a result of that unusual sizing, I’ve just posted a pair of their snuff suede Lyndon II double-monks in UK10 for sale on Styleforum classifieds – they will actually fit someone who wears a UK10.5 rather than a UK10. Worn twice only.

Well they are for sale, you know!