Once just the upper and insole remains, both are tacked together in a couple of places around the toe. Everywhere else on the shoe the two are already tacked together, but the toe is secured by a wire during the lasting process (using a bed-lasting machine), so once the sole is removed there is nothing there to secure them. 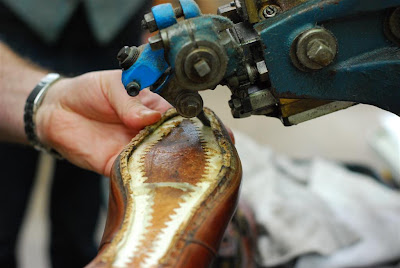 A plastic bag is then pulled over the shoe to prevent damage to the upper. Usually these bags are just used for suede and lighter coloured leathers, which need more protection. A cling film (at a fraction of the price) is used for everything else. 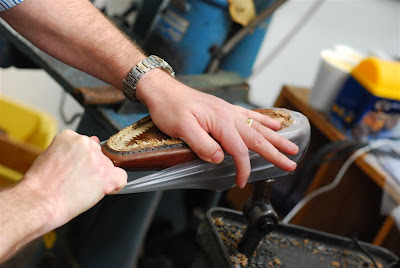 The new welt is then soaked in water to make it more pliable and sewn on. [Quick fact: the welt-sewing machine shown here was made by British United in the 1950s. Generally ones in this light blue are post-WW2 and the iron ones are pre-WW2. This one in particular used to be used by Wellingborough College for those training to be shoemakers.] 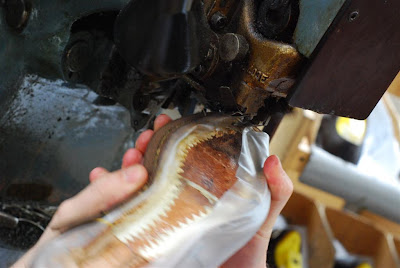 The thread is then sliced off and the shoe put into an in-seam trimmer, which removes as much of the welt (and plastic bag) as possible on the inside. Although there’s not as much on a resoling as there would be on a new shoe, it needs to be cut down as far as possible to make the sole flush with the bottom. Otherwise the sole would stand away and the welt would have to curve down to meet it. The next machine, the welt beater, has the same aim, hammering the welt even closer. 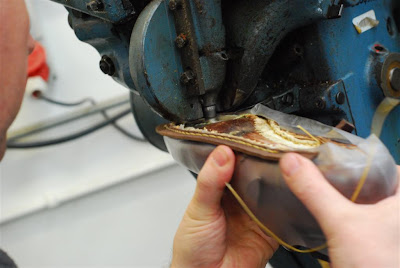 Next a seat lift is tacked onto the heel. This is essentially a continuation of the welt but is less bulky to do in a separate section. The join is skived to make it as close as possible. 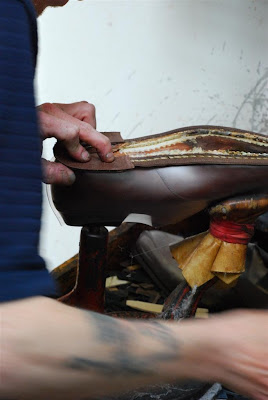 A new shank is added and glued on (glue also known as ‘hot melt’) and the seat lift hammered into place. And finally, rubberised cork is filled in and smoothed over. (This machine is a ‘bottom filler’. Understandably, its operators, who are usually also ‘seat lifters’, refer to themselves as plain shoemakers.) The cork is given a couple of days to dry before the sole is stitched on, the plastic bag removed and the whole finished off with some tender care and polish. 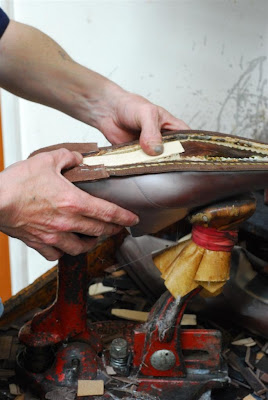 [Second quick fact: it’s a urban myth that when a shoe squeaks, at least an Edward Green shoe, the shank is broken. That used to be the case before hot melt, when a shank would be nailed in place, but nails haven’t been used for 20 years. Also, even then the shank would have to break when it was first nailed on – it wouldn’t break from wear. So if a shoe suddenly started squeaking it wasn’t the shank. More likely on high-end shoes is that the lining and upper are rubbing together. Better shoes keep the two layers loose to create greater comfort; others glue everything together and last them as one layer.]

You can follow the discussion on How great things age: Edward Green 2 by entering your email address in the box below. You will then receive an email every time a new comment is added. These will also contain a link to a page where you can stop the alerts, and remove all of your related data from the site.