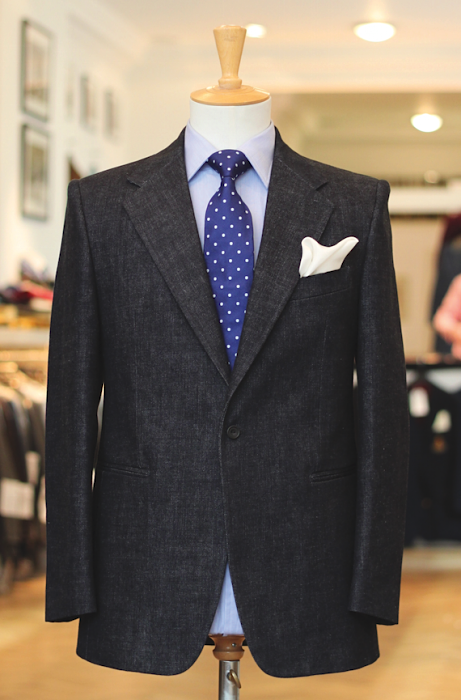 The crossover between denim and tailoring is an interesting one. The appeal is perfectly understandable: like tight fits, short jackets or bracelets, it reflects a desire to undermine the conservative preconceptions of suiting. The execution, however, is tricky; and for a tailor it is crucial to understand a customer’s expectations.

I’ve been talking to various tailors over the past fortnight for an article on it in The Rake. For some, tailored denim is nothing new. Edward Sexton described the denim suits they used to make when Tommy Nutter was alive. Timothy Everest, who worked with Tommy after the split, has experimented with such materials ever since, and is still perhaps the most innovative. Richard Anderson started making denim suits in a light, 10oz cloth shortly after he left Huntsman.

Interestingly, denim has different associations for different people, yet seems never to lose its cool. For some of Tim and Edward’s clients, denim means the 1950s and cowboy culture; for Richard, it is the free-wheeling 1970s; for modern makers, such as Davide Taub (who made several denim jackets in his days at Sedwell), the associations are more recent.

The reason customers’ expectations are important is that tailored denim looks very different depending on how it is made. At one extreme, you have a regular bespoke jacket in denim. Regular canvas, regular shoulder pad, regular cut – like Richard Anderson’s shown above. This looks surprisingly formal, even in lighter denims. 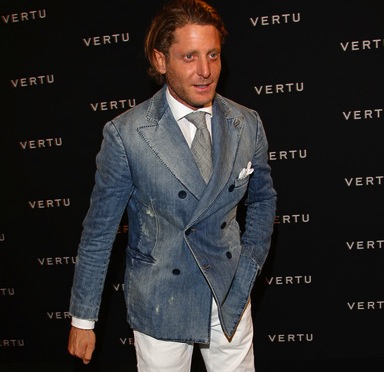 At the other extreme, you have entirely unstructured jackets – like Lapo Elkann’s made by Luca Rubinacci. This had no canvas, pad or lining. (Above is the RTW version subsequently made by Lapo as part of his Italia Independent label.) Either type of jacket can be made with washed denim, to age it (effects varying depending on whether it is water, stone or enzyme-washed, as well as temperature), but only the unstructured variety can be garment washed – i.e. after it has been made.

It is the garment wash that fades a jacket on raised areas, such as the collar, cuffs and seams. This is also the look most customers are used to in a ‘denim jacket’. You can’t wash a structured garment because the canvas and pad (even if pre-washed already) won’t survive. And even on an unstructured one, you have to allow for a lot of shrinkage, which makes getting a bespoke fit pretty tough. Luca has sworn off doing so for just that reason. 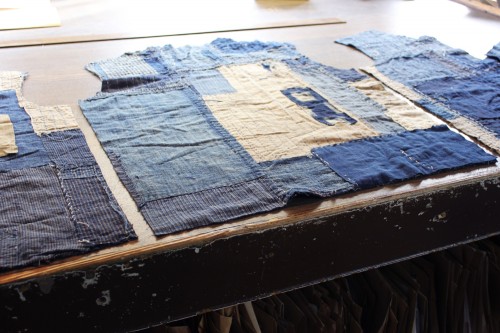 In between those two extremes, there are lots of varieties, often depending on the weight of the cloth (Holland & Sherry does 10oz to 14oz; Tim, Richard, Joe Morgan and others work with different Japanese mills). Some jackets are made with just lightweight canvas through the chest and shoulder. Others have a little home-made pad made of folded felt.

Of course, what you mean by ‘denim’ also varies among tailors and customers. For some (e.g. Jean-Claude Colban at Charvet, who makes denim evening shirts among other things) it is the use of natural indigo dye, nothing else. For others, it is the material, weave and finish – a cotton twill, of coloured warp and white weft, with a rougher finish. For most, it is some combination.

An interesting area, as I say. Look out for the feature in The Rake for more details.

(Other images from Timothy Everest: above, work jacket being made in Japanese patched fabric; below, jacket in heavy indigo-dyed kendo cloth. Both, for reasons of style and material, being made with no internal structure) 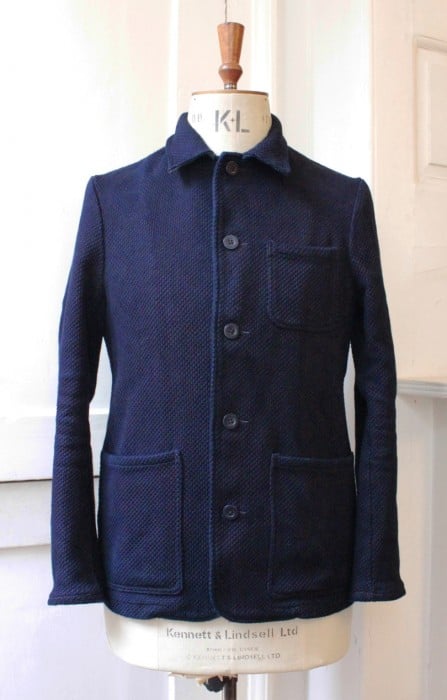 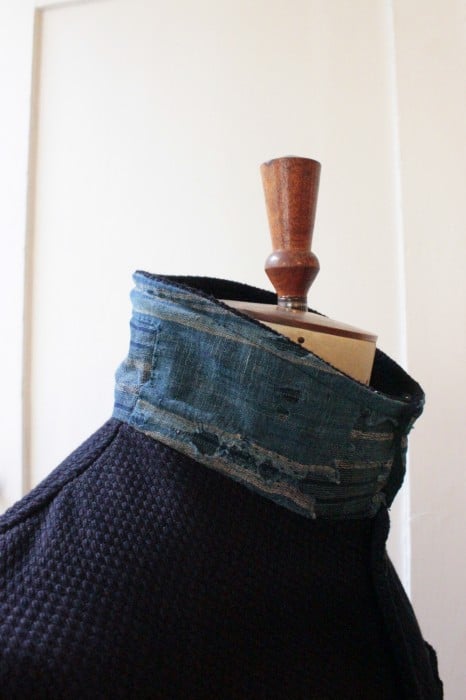 Indeed denim has different connotations to everyone. For me, denim actually represents a safe and unstylish default option from teenage/student years. It is for that reason that denim tailoring would be a bit of an unappealing oxymoron to me. I get the impression that venturing into timeless and high end clothing sees one starting with the basics (e.g. filling up a wardrobe with well-made suits/knitwear etc of classic colours and textiles, starting to buy traditional English shoes at £350+ a pair) then moving on to more interesting materials and bespoke processes, but with the same momentum one can drift into the mildly outlandish and esoteric, purely out of a fascination for the workmanship and endless permutations that bespoke can offer. Which in some cases involves a departure from clothing which is in any way (permanently) stylish.

I agree, that certainly makes sense as a way to start, and it’s certainly easy to drift too far into the fashionable or esoteric when the basics are covered. Something to always watch for

Thanks, although with some bespoke like that at Levis written about here, you can have that denim and get (in my experience) a better fit than through wash and wear

Dad denim anyone? Simon, another great post! I must say that it doesn’t appeal to me personally. Jeans are jeans and tailoring is tailoring. Just because you CAN do it doesn’t mean that you should.

Cotton is the tailoring equivalent of denim, but much smarter. However, wearing an evening dress shirt made of denim risks making you a cretinous dandy of the highest order. I’ve also seen bespoke Savile Row-made jeans. They are ineffably naff. Jeremy Clarkson himself wouldn’t be seen dead in them. Jeans look better for their imperfections. They are work wear.

For me, Lapo Elkman, lovely man though he is, has questionable taste in clothes. He dresses like a fashion victim and style-wise shares little DNA with his father. Someone needs to state the obvious.

Denim is certainly strong and practical, but so is nylon. Who knows, Simon, in 12 months maybe we’ll all be ordering bespoke nylon tracksuits!? Looking forward to the Rake article.

Hey Mac,
Agree on all, except bespoke jeans… See my pieces on bespoke at Levi’s. Problem is about style rather than how they are made I think

I would be tempted with bespoke Levis – except 501s are an okay fit on me.

I would however like a MTM classic denim trucker jacket. Does anyone make those? I’m also thinking of asking a tailor (or maybe a shirtmaker) to make a bespoke trucker jacket – but in tweed.

I personally like the way Lapo dresses, in context.
Do bear in mind he lives in milan, epicentre of the men’s fashion universe, so has to be somewhat more daring than us. Always tailored well too.

I think the wider problem is that people are too quick to throw around the term “style icon”, and yes, that applies to today’s famous footballers. Basically “style icon” has been transposed for what it really means today – someone who wears the latest expensive designer clothes given to them by the fashion houses. That is what people mean when they use the term “style icon” today – so those who prefer tailoring and focus on construction, cloth, workmanship etc are left scratching their heads when confronted by the aforementioned. There is nothing stylish about people who are shoved into sample size clothes which clearly do not fit them well, but because they are by brand names X,Y,Z, joe bloggs public on an average wage who doesn’t know much about the topic anyway assumes the fit is perfect, and with the stuff being very expensive, assumes he/she is therefore a style icon.

Regarding denim – the dark stuff I wouldn’t bother getting made into a jacket – suit but I have seen nice SBs in washed denim and in all honesty are not too far off visually from the likes of boglioli anyway?

Hi Simon,
I rather like the idea of a bespoke work jacket in a similar vein to the Timothy Everest example pictured. Could you suggest any other tailors that would be worth talking to in this regard or is Timothy the best bet for something as casual as this?
Cheers,
Sam

I’d say Timothy, yes. Could also talk to Davide at Gieves or Rubinacci, but the look would be different in each case

Do you know where can i find Bespoke suit tailor in Japan and Honk Kong, that’s good finishing, neat suits ?

No, as mentioned in the piece, Luca Rubinacci doesn’t make them any more. However, it’s worth trying Cifonelli, who are making great denim at the moment