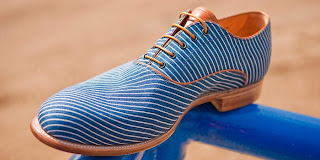 Summer brings many things bright and unusual, one of which is shoes. They may be a normal colour but in suede, they may be a pale leather or they may be in adventurous and contrasting hues. I’ve had two questions in the past week asking about what to wear with this kind of footwear – one referred to tan spectators, the other to grey/blue Oxfords from Nicole Farhi. One writer also mentioned Lodger’s summer shoe in blue/white linen (pictured alongside a spectator from the same brand).

I think you have three options: summer cloths, grey, or jeans.

To take those in order, the most formal and traditional option is to pair bright shoes with the kinds of colours and trousers they were originally intended for. So a pair of spectators (also known as co-respondents) would have been worn on a bright day with what would then have been considered informal cloths – linens or cottons, possibly flannel, in white, tan or anything in between.

So an outfit might be: cream flannels, blue oxford-cloth buttondown shirt and a navy blazer. Perhaps a V-neck sweater if you want to make it a bit more casual. A key here is also to tie in similarly coloured accessories if possible – a tan belt with the spectators for example. 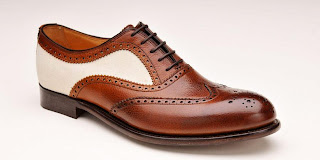 Essentially, the first option is about pairing the shoes with clothes of a similar formality in similar colours. The blue/white linen shoes could be harmonised with some blue above the waist to tie them in, just as the tan belt ties in the spectators.

The second option is grey. Of the darker tones usually worn with formal clothes, plain grey supports bright colours the best. This is because bright colours will always look cheapest when paired with contrast elsewhere – a navy suit and white shirt will make a bright pink tie look cheap. Replace that with a mid-grey suit and the difference is startling.

So you could pair any of these shoes with mid-grey flannels or worsted trousers (mid-grey is actually a fairly light colour – probably the lightest grey one would wear for business), a white shirt (to pick up some of the brightness elsewhere) and perhaps something that picks up one of the colours in the shoes, again.

Last but by no means least, wear them with jeans. Jeans can soak up the brightest of colours, as demonstrated by the neon trainers some guys wear. Not indigo jeans, though, or you’ll have some of the same problems as the navy suit mentioned earlier. A nice mid-blue, with some paleness where they’ve been worn in.

Those are your choices.

The spectators are nice. However, I can’t imagine owning, much less wearing, the first pair. Then again, I feel much the same way about every shoe Nike has made since the debut of the Air Jordan.

Spectators on anyone younger than 80 are caricature.

Those blue shoes are simply silly.

Where could one get hold of the shoes in the second picture? Lovely pair of shoes…

Anton, those are the Lodger spectators, only briefly available as their shoe of the month last year. You could always petition them to bring them back, though – see http://www.lodgerfootwear.com