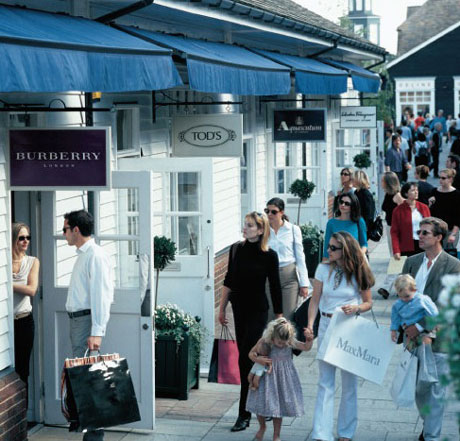 I am a sucker for a good deal. Indeed, if one were being unkind it could be said that sometimes being a bargain gets in the way of my actually wanting something. Anywhere north of 80% off and I start to feel giddy.

For a long time I’ve been a fan of the Designer Outlet just outside York. That’s where my in-laws live and it’s a nice excursion when I’m up there for a few days. But recently I discovered Bicester Village; York has rather paled by comparison.

I went to Oxford University yet I think I only went to Bicester once (the outlet is a just a few minutes outside Oxford, around an hour from London). It was a bit of a disappointment – small, damp and not particularly large discounts. How that has changed in the intervening 10 years.

Most outlets offer few options for men. Perhaps a Hugo Boss and a Hackett; Paul Smith if you’re lucky. Most men spend their time wandering around the luxury labels – Gucci, Armani, Prada – looking at the relatively small selection catering to them rather than their other halves.

Bicester has a great Dunhill outlet. Plus Ferragamo, Zegna and Pal Zileri. And Aquascutum, Brooks Brothers and Church’s, Burberry, Tod’s and Gieves & Hawkes (a sad endictment of Gieves that). It’s got everyone. Even Ralph Lauren, a regular in this kind of shopping outlet, has an oversized store here with extreme discounts. There was a Purple Label cable-knit sweater that still haunts me – £695 reduced to £89.

But my favourite discovery was Loro Piana. A extremely luxurious Italian cashmere label, I didn’t realise they had a discount outlet anywhere – indeed, I’m not sure that management is keen for people to know about this one. I picked up a true investment piece: a three-button leather jacket lined with cashmere, soft yet hardy, already imbued with the feeling of 100 winter walks. It was 80% off. I staggered to the till, a little light-headed.

I think the scale of the discounts at the moment is unusual and driven by the economy. According to a regular visitor, increasing numbers of shoppers has meant that the standard discount is not as large as it used to be. The Village is also dominated by Asia women chasing branded handbags and boutique designers, but it’s big enough for everyone to get around – just don’t go the Saturday before Christmas.

The train from London Marylebone to Bicester North takes 50 minutes and costs £23 return. Then there’s a mini-bus shuttle that costs a further £4.40 return and takes about five minutes.

Does Loro Piana sell suiting fabric there as well?

No Fox, they don’t. I’m afraid you’re expecting a little much from an outlet village!

Sounds fabulous… that shuttle doesn’t have a stop in Seoul, Korea, does it?

YOU CAN CALL ME : Miss X

hey.. i’m going to bicester village for boxing day,26th. will arrive at stansted airport. how to get to bicester village?
(stansted-stratford-marylebone-bicester north-bicester village.)
is that the best route or there’s better option? please mail me. and ya, tell me more on men’s items at bicester. aim to buy wallet, shoes and polo-t. planning to go gucci, ralph lauren armani, hackett, tod’s.. mail me how’s the price range like. [email protected]