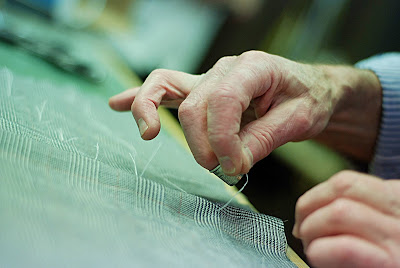 This, the fourth part of the series looking at the making of a Henry Poole suit, examines the padding of a chest. It is being done here by apprentice James under the watchful eye of John Dryer.

First, James takes the three parts of the canvassing (canvas, horsehair and domette) and cuts them roughly to shape, chalking it first and then using his shears. That done, he cuts a slice in the top of the canvas and horsehair – around where your collarbone will be on the jacket. The slice is pulled apart slightly, by about the width of a finger, and an extra piece stitched onto the back of it with the sewing machine. This makes the canvas and horsehair slightly convex, bowing out from the chest. 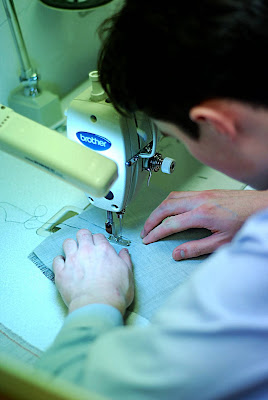 The two slices are cut in slightly different places, so that when they are placed on top of each other no ridge is formed. The domette (the black, spongy cloth here) is then placed underneath and all three basted together. Some baste these pieces together with simple tacks at the corners; others do a couple of straight lines; Poole tends to stitch a rectangle and then one extra line that follows the outside edge.

Then, on to the padding. For James, this is the best part of making a jacket. “If I was a customer, this is the part I would like to see – it shows the work that goes into the suit, and the architecture that will hold it all together for years to come,” he says. 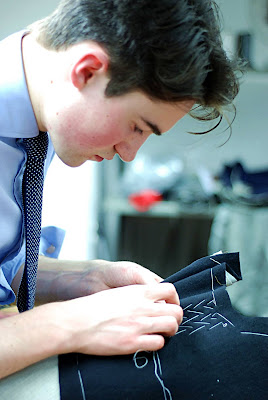 The stitches are around an inch in length and closely packed. Padding styles vary considerably between coatmakers, but it’s fair to say these are denser than those at Anderson & Sheppard but looser than Huntsman – as you’d perhaps expect.

John is particularly complimentary about James’s padding: “When he gets going his work is fantastically fast and accurate. You watch – all those stitches are exactly the same and perfectly placed.” That’s John you can see below, doing some mark stitching on the foreparts of my suit. Mark stitching involves basting lines along the chalk marks on the cloth and then clipping them off, leaving small stitches that the coatmaker can follow later on as the chalk becomes hard to see. 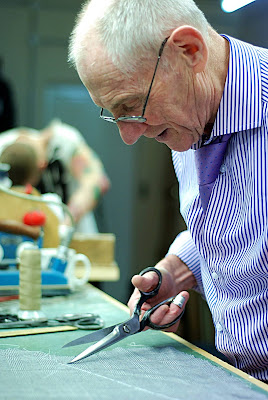 Back with James, his padding starts in horizontal lines running from the centre of the chest upwards. Then he runs vertical lines from the centre downwards. In each case, the key is to stitch away from the centre so you push fullness outwards rather than ending up with it sitting in the middle of the cloth.

Last is the lapel, which uses the sewing machine’s padding stitch. This creates lots of equal but loose stitches that are whipped around a central line of thread. The advantage of using the machine is that it is easy to adjust the tension, which is important in shaping both the lapel and the collar. 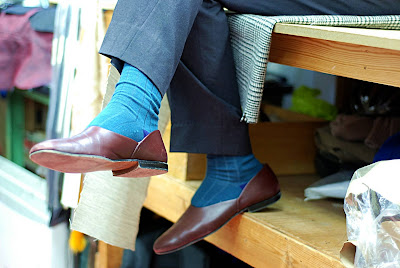 You can follow the discussion on Prince of Wales at Henry Poole: Part 4 by entering your email address in the box below. You will then receive an email every time a new comment is added. These will also contain a link to a page where you can stop the alerts, and remove all of your related data from the site.