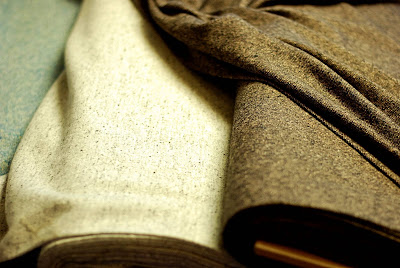 I was interested in the Rubinacci vintage cloth for my jacket (see previous post here) but wanted something a little more substantial than the French linen. This is England after all. In particular, I thought something with a pattern akin to a Donegal check, with its flecks of white and subtle colour, would be nice, but in a lighter weight than the Irish and Scottish tweeds.

Digging through the vintage bolts on display in Rubinacci’s London store, Luca and I found a couple of cashmere options, one cream and one brown. The brown in particular was an interesting mix of colours, being actually made entirely of black, cream and white threads. And it would be more versatile than the cream, so that was what we opted for. 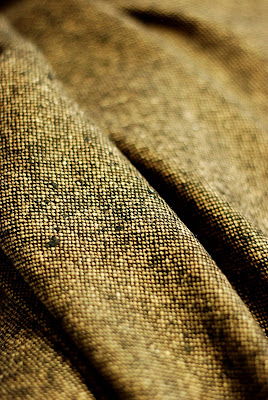 “As it is your first jacket, I would like to make you something that you will wear forever – something very versatile and classic,” said Luca. “I like to experiment on the second or third jacket, when I know the customer’s taste a little better.”

The style is to be single breasted, with three buttons. As the Rubinacci chest is so soft, the three buttons easily roll to two, as can be seen even on Luca or Mariano’s most formal suits. It will have patch, curved hip pockets and the standard Barchetta (little boat) curved breast pocket. Rubinacci normally puts three cuff buttons on its sports jackets, but I prefer four.

It will be half lined in silk. Rubinacci always uses silk, though most British tailors say it wears out too quickly and doesn’t breathe. It is certainly more expensive than Bemberg. Luca admits both the criticisms of silk, though he says the heat issue is a slight one and Rubinacci just replaces linings once they get too worn (though they do charge for this). 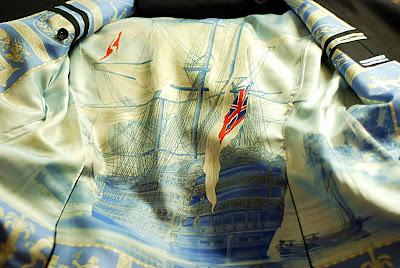 I had thought to get the jacket lined in one of Rubinacci’s wonderful silk scarves (an example pictured above) but decided that was a little too flash for me. It also adds £400 to the cost of the jacket (which starts at £3100, though mine being cashmere will cost £3500). That cost for the scarf might not be seen as extortionate given the lining requires two scarves and they retail for £220 each.

“I think you have to be a certain character to want the scarf lining,” comments Luca. “And it’s a question of balance – I have one customer that has 20 blue suits from us, but all have different scarves inside. It’s an opportunity to express your inward character rather than your outward appearance.”

Another option Luca is particularly fond of is using tie silk for the lining. This has to be specially made, because most ties are around 75cm long – too short for a jacket lining (my jacket length is 79cm). So Luca has a dozen or so swatches that customers can choose from and the silk is made up separately by the weavers. 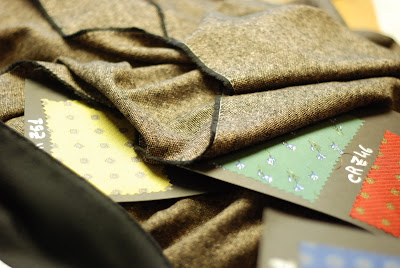 That adds £200 to the cost of the jacket, however, and none of them particularly caught my eye. (Some options shown above.) So I went for a plain silk, in deep green.

Last, Luca insisted on leaving the sleeves unlined. This is a first for me – all my jackets, even unlined ones, have lined sleeves in order to help your arm slip into them. But Luca justified it by saying the jacket will feel like a sweater, and a sweater doesn’t have lining in the sleeves. It takes a second longer to get your arm in, but once it’s in there’s no problem. We will wait and see.


Next post – the measuring with Mariano, and opinions on being middle men, not cutters

Personally I’d say £220 for a silk scarf is a bit extortionate, not to mention £3,500 for 1/4 lined jacket. I would’ve thought one scarf would have managed that.
The bolt of cloth for the actual jacket looks nice though. I’m also interested in how the unlined sleeves will look and feel.

Indeed. Worth every penny in my book.

Given that a “regular” (for whatever that means at Rubinacci) vintage cloth, half-lined jacket (obviously no lining in the sleeves) costs 3.700,- € or roughly 3.300,- £, It seems to me that you got a really good deal from Luca…

Enjoy the jacket (very good in my opinion) and looking forward to your next post for this series.

Hardly an objective comment on your prospective Rubinacci jacket being worth every penny before you have received it. It seems that you have formed an opinion irrespective of the results.

I looked around for a suitable article to bring this up. Hope this fits the bill.

Considering getting one of Rampley & Co.s fine art silk linings for a double breasted blazer size in a heavyweight and somewhat stiff corduroy. Do you have any thoughts on the durability and practicality of silk for this purpose?

I believe I will opt for something like Bemberg or Ermazine for the sleeves, perhaps striped. Silk is not advisable here I believe?

The thing that attracted me to Rampley was the beautiful reproduction of European Masters and also the jacket fabric itself is a special 100% silk corduroy in a navy.