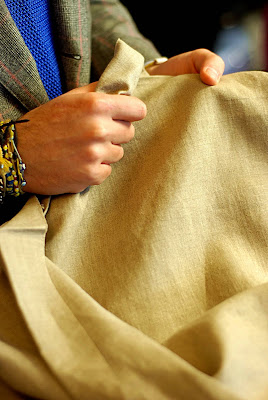 The next series to feature on Permanent Style will look at the making of a cashmere jacket at Neapolitan tailor Rubinacci, based on interviews and fittings with Mariano and Luca in London and a visit to the Naples workrooms to see it being made.

For those interested in these series, you can see previous ones on Henry Poole (DB glen check suit), Huntsman (tweed shooting suit), GJ Cleverley (bespoke Oxofrd shoes) Turnbull & Asser (bespoke shirt) and Graham Browne (navy DB suit and polo coat) at those links. I should also mention that you can get a behind-the-scenes look at suits at Anderson & Sheppard on excellent site The Notebook.

This first post in the Rubinacci series will look at the cloth available. Rubinacci has an enviable reputation for vintage cloth, built on a collection begun by founder Gennaro Rubinacci and continued no less enthusiastically by his son Mariano. The house now boasts over 60,000 metres of vintage cloth (defined as pre-1980s), mostly in storage in Naples but with a good amount on view in London to be browsed by customers.

For those visiting the London store for the first time, most of the bolts of cloth on the wall at the back are vintage. There is one big marker that suggests something is vintage: before the 1980s most weavers didn’t bother putting selvedge on their cloth (that’s the ribbon down the edge that bears the maker’s name). Most mills specialised in particular types and weights of cloth, so there was no need to label them.

“After the eighties everyone started making everything – Italians making tweed, English making lightweight worsted – so they began putting selvedge on to identify their cloth,” says Mariano. (For more on Mariano’s opinions on tailoring, see previous interview here.)

Back in those days you also couldn’t order two or three metres of cloth – it had to be by the bolt. While some tailors sold off these bolts, Rubinacci tended to hold onto them. “This is why we are considered to be the best for material, because we were a collector first, a seller second,” says Luca. “It would have been suicidal for another tailor to hold onto so much cloth. But we’ve been fortunate in the past few years that vintage has very much come back into style.”

Today Luca and Mariano supplement the collection by listening out for tailors that are going out of business and buying up all their cloth. They visited one in the south of France recently and came back with over 200 bolts. “You can’t be picky when it comes to buying it up,” says Luca. “You’ll get a better price if you take the whole lot, and of that 200 there will be at least 20 or 30 that are absolutely magical.” 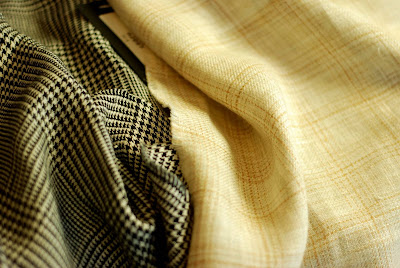 As examples, Luca pulls out two linens, one cream and one a brown glen check (shown above). They are very lightweight and in an open weave. “You don’t get much linen like this anymore, certainly not cheaply,” he says. Apparently this kind of open-weave linen tends to come from the south of France and Italy; Irish linen is harder and more closely woven because it is still expected to be able to deal with a cold breeze. Italian and Scottish cashmere are similarly distinctive, with the former tending to be much smoother.

Looking forward to your reports of this series.

This is excellent! Thank you for these series. I really like reading this information.

See that you have both a suit by Poole and Rubinacci. What would you regard as being the significant differences between both, and which do you prefer?

They couldn’t really be more different, in terms of style, cut and everything else. Traditional straight excellent English cut vs Neapolitan style and softness. They both fit very well so it’s a question of taste more than anything else.

I’ve tried a lot of others, Neapolitan and English, if you want a more direct comparison?

Excellent: thorough and informative .
You seem, however, more concerned with the suitability of a jacket to be paired with jeans, than one might expect of your level of expertise.
In my opinion, a real gent dismisses, jeans, as I do, as a well worn cliche.
Leave it for Los Angeles, where this level of refinement doesn’t really play.

To be honest John, I find it funny that you can associate jeans with things like expertise or being a gentleman. It’s such an oddly narrow view of the world.