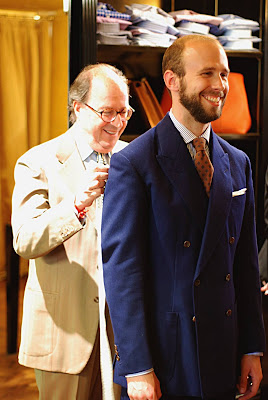 Following on from the previous two posts in the Rubinacci series, on cloth and style, this week runs through the measuring and opinions on tailoring as a whole.

The biggest difference between Rubinacci and other, English tailors that have featured in series on Permanent Style is that neither Mariano nor Luca are cutters. Or more importantly, the cutter will never be involved with the fitting of my jacket.

Now this is one of the big disadvantages of travelling tailors, who have to communicate all details of the fitting to the tailoring houses they use – whether in Crewe or the Czech Republic. And I have had several bad experiences with travelling tailors (as well as some good ones).

But those bad experiences have usually been down to the inexperience of the travelling tailor, who often lacks knowledge of figuration or even the cutting process itself. Luca and Mariano certainly don’t fall into that category, and the tradition of being what we would call ‘front of house’ is one that extends to Mariano’s father, Gennaro, who founded the firm.

“We have always been the middle men between the customer and the tailor. It means we can combine knowledge of tailoring with advice on style and the customer’s wardrobe. We are also more flexible – cutters tend to only want to cut the style that they know,” says Luca. “My grandfather was famous for giving this kind of advice. Indeed he started out by going with friends to visit tailors, in order to help them with their choices.”

Luca also told the story of when he first went to work in England, at the age of 18 at Kilgour French & Stanbury. Apparently when he entered the shop wearing his first Rubinacci suit he was bursting with pride, only to be deflated with friendly barbs from all the Kilgour staff, pointing and laughing at the shoulders, the chest, the pockets.

That evening he tearfully called his father, asking why he had made him such an awful suit. “Good,” Mariano said. “Very good. It is only your first day and you have learnt something about tailoring. You have learnt that there are two styles –their style and our style – and you have learnt what you like and don’t like.”

Next day Luca returned with renewed pride, aware of the benefits of Neapolitan tailoring and the fact that Kilgour couldn’t make it if they tried. Two of those Kilgour cutters, Ritchie Charlton and Campbell Carey, are now at Hayward and friends of Luca’s.

“I hate it when people talk on the forums about what is right and what is completely wrong,” says Luca. “Everyone has a different idea of what’s classic and what’s stylish.”

Luca also believes it is silly today to classify a tailor as either Neapolitan or English. “To be successful worldwide you have to do everything. We can do an English shoulder and I’ve seen a spalla camicia done by Huntsman. It may have been a challenge to be the best Neapolitan tailor when there were 300 of them, but not any more. Now it is a challenge to be the best in the world.”

Do any examples exist of a Rubinacci jacket with an English shoulder?

I think you’re observing an example of it in the image. The author’s most recent acquisition seems very similar to the coat in the fitting above, which suggest a remarkable execution by Rubinacci’s tailors.

While it might be true that you need to be global today, but why would anyone go to Rubinacci for a English jacket is beyond me.

I can somewhat understand if someone wants a twist of English shoulder while retain the Italian chest piece etc. to go for Rubinacci I suppose…

Wow, nice blast from the past – no I’ve never seen that, though things have changed at Huntsman once or twice since this article, so maybe they were experimenting with it more at one point