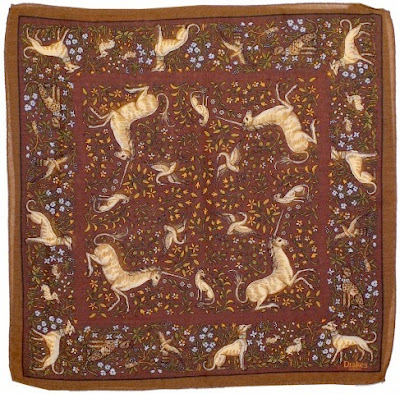 I love the fact that more men are wearing pocket handkerchiefs. It’s a great avenue for expression and way to wear colour when so many men dispense with a tie. But it is also dangerous. It is unusual, and therefore stands out. If not done right it can undermine any suggestions of style elsewhere. Hence, five tips on handkerchiefs.

1 Stuff it. Even if you prefer a square top to the handkerchief when it peeps out of your breast pocket, stuff it in. Just fold it into a square and then stuff it in.

Don’t attempt a razor-sharp thin white line – the so-called TV fold. It looks good in Mad Men because everything about them is that sharp and that groomed. Until you have your suits made for you and pressed every morning, and preferably have your own make-up department, stuff your handkerchief. It should look like it’s meant to be used anyway.

2 Assuming you’re not also wearing a tie, think of the colour of your handkerchief in the same way as your tie. The same dark colours and simple patterns worn just as well. It doesn’t have to be bright.

If you are also wearing a tie, the colour of the handkerchief can pick up on a minor colour in the tie, shirt or anything else. Or pick up on nothing, just harmonise with the other colours (in the same way the tie does).

3 The key to stopping the handkerchief falling down inside the pocket is to make sure part of it is touching the bottom of the pocket. Stuff it in until it touches, then pull out what you need. The Lazy Fold is a good way to achieve this.

4 The only real quality consideration in a handkerchief is that the edges should be hand-rolled: turned and secured with broadly spaced stitches. If there is a straight line of thread joining these stitches, that is a machine imitation of a hand roll.

Beyond that, the handkerchief just needs to be big enough. There is little difference in the quality of the silks.

5 Try wool. Or wool/silk mixes. Silk can be too flashy for some, as can white linen. Wool takes the shine off things, like the pattern shown at top (on sale at Drake’s) and can be both more casual and quietly sophisticated. Traditionally goes well with rough country cloths like tweed, but also a nice change of pace with a worsted business suit.

Thanks Simon. Any hints for stopping handkerchiefs riding up? Obviously this is more of an issue with silk than wool or linen, but it would be great if there was a way of keeping my silk hanks looking as smart as the others.

Keeping silk secure in place is all about making sure the handkerchief touches the bottom of the pocket and is tight enough across the top. Have a search on the site for the Lazy Fold. It’s my favourite technique.

I did try your Lazy Fold previously, but I think I must be doing it wrong because it still drops a little. When you say that one of the corners is stuffed in, is that one of the unfolded corners?

Perhaps you could make a video?

Yes, you begin with the handkerchief unfolded and never fold it through the process. That’s what gives it greater drip. But you’re right, a video would be good.

Count this as another vote for a video 🙂

The modern fashion with handkerchieves is iteresting, especially when considered in line with traditional conventions. A gentleman’s handkerchief should appear that it is ready for use (and not that it just has been) so that it is not just a decortive item. The ‘one for show and one for blow’ use of hankies is still considered a shocking faux pas.

Some hold that the only correct place for a hankie to be carried is up the left sleeve and not in the breast pocket at all. This is only true of army officers whose tunic pockets are otherwise used – often for specific uses covered by standing orders. Hence the up-the-sleeve rule, as a hankie is not a military item but nonetheless must be kept about the person in ready convenience.

This is illustrted in one of the Sherlock Holmes stories as Holmes comments to Dr. Watson that Watson signals his army service background by the fact that his kerchief can be seen peeping out from his coat-cuff.

Either way, the hankie should never be folded, but stuffed a la ready for use – and should be used at every opportunity. Never fear soiling the item, for a gentleman will never use a hankie for more than a day, and will always have a good, freshly laundered supply stocked in readiness.

From When I was about 4 or 5 my mother always put a hankie in my top pocket of my Coat when we went any where always folded with a single point & have always had one in my coat pocket ever since.

If I correctly understand Anonymous, he disagrees with the practice of pocket squares for decoration?

There are two problems you do not consider: 1. You have no doubt the difference between machine and hand made can be recognized, 2. Why are pocket squares offered in the size 12″x12″ or 30cm x 30cm, for example by duchamp, if according to your experience, this size is too small?

I think most people who care enough to wear a nice pocket handkerchief would notice the difference. It’s a pretty small world we’re talking about.

Why indeed? Many brands do things that make very little sense. I once witnessed the design process at a luxury brand on ties and other accessories, including handkerchiefs. I asked whether any of them wore a handkerchief. None of them did.

What’s your opinion regarding cotton (rather than linen, silk, or wool) pocket squares? What if the cotton has a nice texture, pattern, or color?

Cotton can be nice, but is always going to be more casual. And even then, I’d recommend wool or a wool box instead

Is season a consideration (e.g., wool for cold months, and cotton for warm ones)?

Yes, though wool/silk mixes are fine for summer too, and again usually preferable to cotton

Last year I picked up wool mix hankies in the Drakes sale; it being Drakes I didn’t check before buying but to my shock later discovered that they were machine rolled! Wasn’t expecting this from Drakes.

What you you suggest as the best size for a pocket square?

A silk pocket square should be 17 inches along the edge; unfortunately, many these days are 15 or even 13…

Only exception to that rule is if you’re trying to fit something into a patch pocket, particularly a Neapolitan one. Much smaller, and can get away with a 13

Are there any brands in particular that manufacture in the size that you recommend?

Very good post. Slowly sifting through the articles on this site and some gems (very little duds though;)).

I wholeheartedly agree with Simon in that squares less than 17 x17 inches (ideally 18 x 18 inches ) tends to collapse in the pocket – thick wool or linen cut smaller might survive though.

And one of PS’s advertisers have a nice selection of properly-sized pocket squares.

Any thoughts regarding whether the pocket square can anchor a suit?. That is, rather than the tie drawing the eye, the pocket square could be the darker element of the ensemble, harmonizing with a relatively pale, subtly shaded tie. Is it the tie that has to draw the eye with respect to the depth of the color, or must the tie at least strike a balance with the pocket square?

A hank certainly can. The tie can easily be plain and the hank draw all the attention, or anchor the outfit as you say

How, and how often, do you wash your handkerchiefs (linen, silk, cotton)? Should they strictly be dry cleaned only?

Dry clean silk, certainly. Linen and cotton can be washed normally, though linen on a cool wash

Do you sometimes iron your linen handkerchiefs (without washing them) to get rid of the creases?

Yes, that can be a nice way to refresh them

For a casual outfit, tweed jacket in the Neapolitan style with jeans, which pocket square fold would you use? I may swap out the jeans for chinos but I don’t imagine the fold would change?

No, but also what the square is made of will make a much bigger difference to its formality than the fold.
For the fold, you just want anything that looks relaxed and casual, like a puff or ends up and stuffed in. Nothing too fussy or sharp

A wool pocket square in a puff fold sounds like the safest bet?

Where can we see the lazy fold, the link is not working.
What can we do to avoid pocket to grow, I think is unesthetic, when we stuff a handkerchief?

I’ll be doing a video on this soon, look out for it… The key to avoiding it growing is having it touching the bottom of the pocket, and tucked it tightly

Any advice for storing pocket squares? Is it best to lay them flat? How about hanging them off of clips?

I tend to fold linen or cotton, and keep silk or wool loose in a draw. I wouldn’t hang them – and how much you care about folding and storing flat depends how much you want them entirely wrinkle free

Any advice on where to buy plain, classic, quality pocket squares? I’m looking for a white silk one for my dinner suit in particular.

The (17) bespoke shoemakers I have known

You could if you want! But more likely on a sofa, a bed, over shivery legs sitting outside

To be fair, my best results at changing shoe colour was spraying brown loake kempton with dark brown renovateur. Hence my suggestion. I dyed myself shoes 3 times, once shoes would head to bin, but got a new lease at life, and 2 times i…

Sure, happy to, perhaps it needs a fuller article. A few quick points maybe: - The quality here is certainly very good - The thing that makes it more expensive than other some other good Italian brands is mostly the type of company (more luxury,…