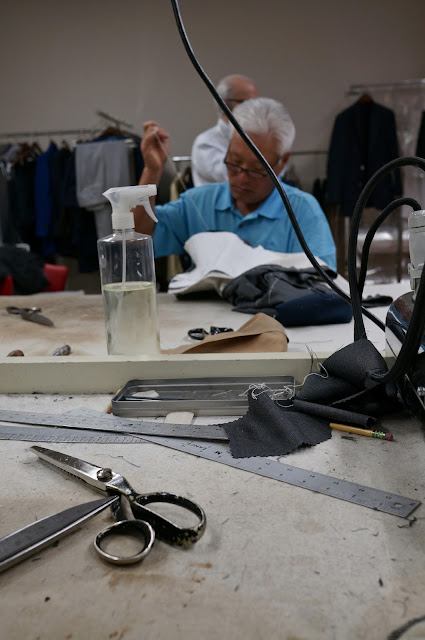 When I visited US tailor Chris Despos last month I was slightly surprised to find that his house cut was so Italian in style. I think in London we often forget the influence of the Italians on US clothing – due to immigration, the openness of the market and its sheer size. It seems odd to an Englishman that Belvest or Isaia would be available in New York but not London, given our proximity to Italy, but the wealth and number of US consumers is a far bigger factor. 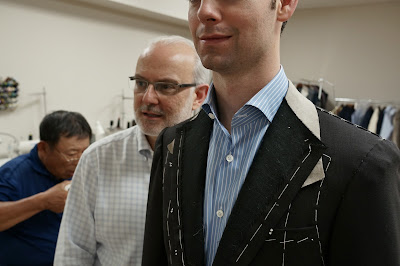 Chris has two Italian coatmakers in Chicago and recently added an Italian apprentice, from Sartoria Gallo in Rome. There is also a trouser maker in Chicago and two finishers in Dallas – where these pictures were taken. The finishers also prepare all the basted fittings for Dallas, once Chris has cut them, but they’ve never managed to get to the stage where they can do the full make. “It’s the Italian shape in the chest and the shoulders that is hard to replicate,” says Chris.
In fact, the two coatmakers are from different parts of Italy – Rome and Bari, in the south – and as a result make slightly different jackets. As you might expect, the Bari style is softer and more natural, while the Roman maker (who trained at Cifonelli, Italy in the 1950s) puts in more structure.
“The nice thing now is that men understand the difference,” says Chris. “My customers used to be mostly guys who just, for whatever reason, couldn’t get ready-to-wear. Now they are more discerning.” It’s not surprising that the trend of more educated and formal dressing has spread to Chicago and Dallas, but it’s good to hear. 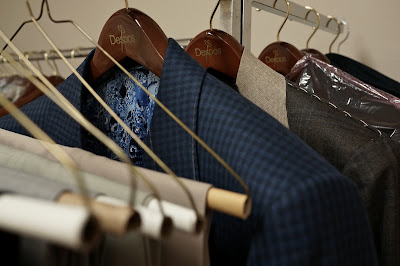 One construction point Chris particularly favours is a forward-sloping, and curving, shoulder seam (below). This is quite unusual. All of the tailors I have tried have either a straight or a backwards-sloping seam (the latter at Anderson & Sheppard and some Italians). Interestingly, Chris thinks he is achieving the same thing with his seam as with a backwards-sloping version: making the shoulder more comfortable and allowing the jacket to move with the customer, rather than fighting against him. 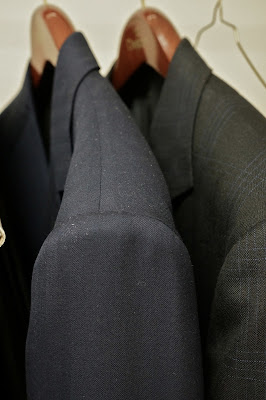 I don’t have any suits from Chris so I can’t make any comment on the effect, but I do know from practical experience that tailors’ much-treasured techniques are sometimes easily replicated in other ways – but if one works, why change it? Chris’s attitude is more open: “In the end, it’s whatever produces a well-fitting, comfortable suit. You have to keep an open mind and never stop learning.” 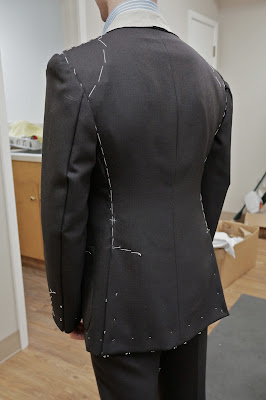 The pictures here are of a suit being made for Kirby Allison of The Hanger Project. At this first fitting it looked good.
You can read about Chris’s back story here. 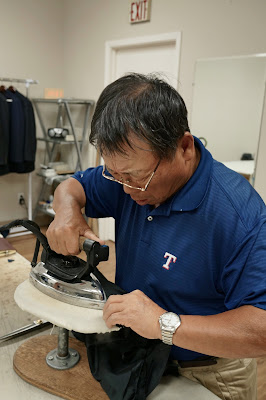 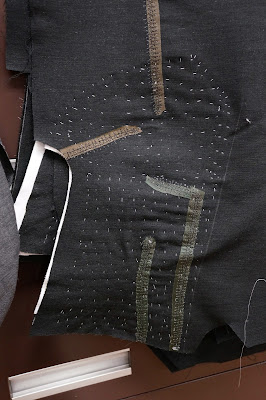 You can follow the discussion on Chris Despos: American bespoke tailoring, via Italy by entering your email address in the box below. You will then receive an email every time a new comment is added. These will also contain a link to a page where you can stop the alerts, and remove all of your related data from the site.

My first commission was a black heavy chalk stripe with scarlet lining - I looked like the Al Capone for the 1990s.