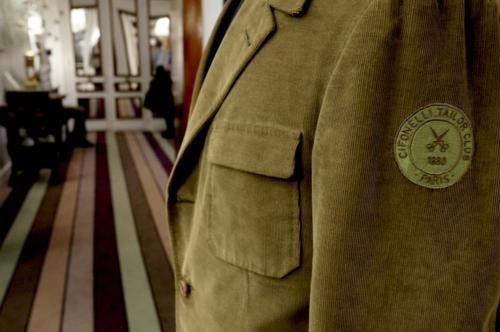 Dinner with Lorenzo Cifonelli on Monday was a highlight of this week’s trip to Paris. So conscientious, so grounded yet creative: Lorenzo in many ways has the perfect character for a tailor. And he has good taste in restaurants.

I was having two jackets altered while I was there – my grey herringbone and green tweed – with the waist being taken in and, as a result of the same weight loss, the collar tightened slightly. We all lean forward a little more when we lose weight, as the distribution changes from front to back. 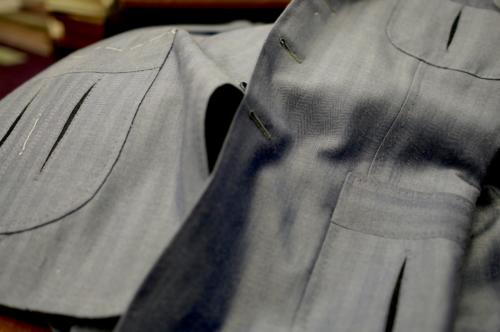 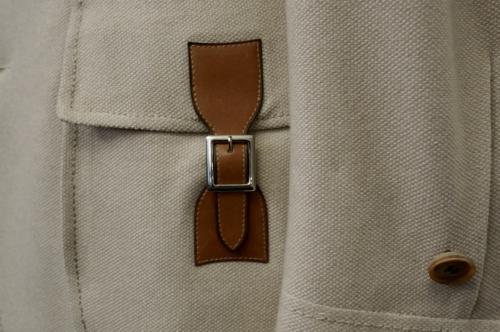 Lorenzo is also in the early stages of a collaboration with Corthay (more on Pierre next week). It looks like this will begin with sharing customers and some stock, but build into something bigger. I can’t wait to see what shoes Lorenzo would design, and what suits Pierre…

As regular readers will know, I am a big fan of Lorenzo’s restless creativity, but tend to tone down his designs for myself. Perhaps grey yak hair rather than bright green; perhaps one less calf-leather strap. The  jackets above are good examples. Two things he has made recently I loved 100%, however. 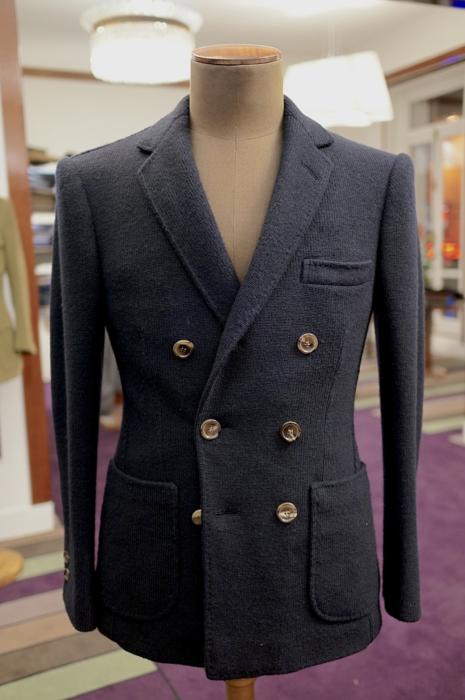 One is this jersey jacket, which is made of a much heavier jersey than most tailors use, and therefore better suits the structure of bespoke. The second was his double-breasted ‘sports’ overcoat, which has patch pockets and a horizontal gorge. I have learned from bitter experience how practical this is on an overcoat. With regular peaked lapels, popping the collar never quite works. Either they fold back down or relentlessly poke you in the chin.

Finally, I mentioned in a recent post how good Lorenzo is on buttons. The reason is that he commissions new designs himself, such as the matte/shiny buttons on my herringbone jacket, and chunky ones on my navy suit. Below is a selection of the ones he has designed, including Cifonelli-logoed blazer buttons. 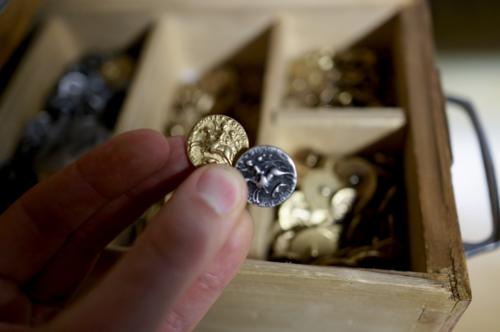 You can follow the discussion on Cifonelli update: jersey, overcoats and buttons by entering your email address in the box below. You will then receive an email every time a new comment is added. These will also contain a link to a page where you can stop the alerts, and remove all of your related data from the site.

Not at all Joseph. Do let me know if any gaps ever occur to you

JJ I tend to agree with you. I just wanted to hear your reasoning. And I agree. However 20 years ago 8oz Lesser tropicals and 9oz JJMinnis Rangoon did drape like a brick. Lesser Tropicals was my favorite cloth. ( was )

Dark navy - not something that looks the same as black, which midnight blue should. Hopsacks don't vary much between makers. Just look for a colour and weight you like