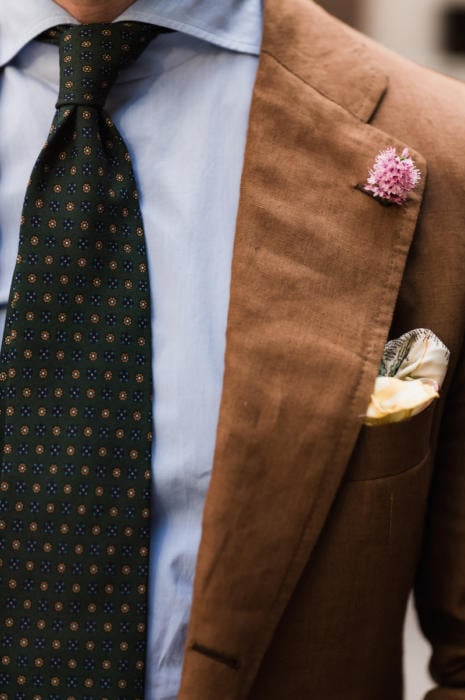 I like wearing a boutonniere – or buttonhole – on more formal or celebratory occasions. Mostly, I think, because it is another opportunity to play with colour. Having come up with a pleasing combination of suit, shirt, tie and handkerchief, selecting a flower is one more challenge and chance for expression.

I also like the fact that doesn’t seem that fussy. Unlike many other formal additions – double-breasted waistcoats, tie pins, collar pins etc – it seems like a light-hearted, playful item. That ever-present risk of taking yourself too seriously – or at least appearing so – is mitigated.

The images here illustrate the range of appropriate colours. Despite the richness of colour elsewhere in this outfit – tobacco linen suit, blue shirt, green tie, yellow handkerchief – all three of these flowers work well.

Cream (below, from a white hydrangea) is the most versatile colour for a flower. Because cream is rarely worn elsewhere, it will be a compliment to rather than a mere mimic of a white shirt or white hank. And even when there is no white present, as here, its lack of strong colour prevents it clashing with anything. 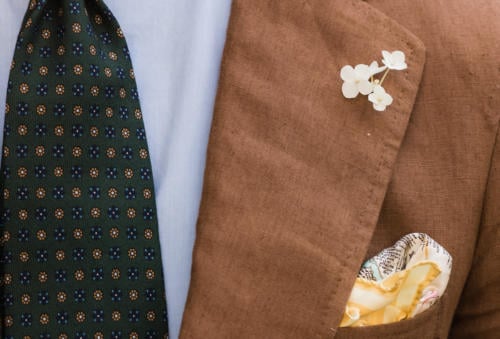 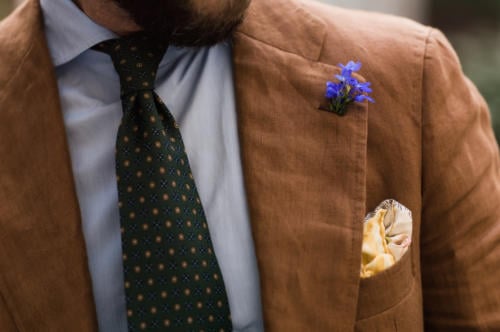 Cornflower blue (above, a lobelia) works by picking up the blue shirt and adding a stronger, deeper tone to it. It also highlights an important point: that you can get away with much stronger colour in a boutonniere than you can with other accessories.

That strong blue would have been out of place as a handkerchief, dominating all the other colours around it. But as a small, prick of inspiration, it is an attractive accent.

Finally pink (shown top, scabious I think) is not reflected anywhere else in the outfit, but was a candidate for a tie or handkerchief. A reader suggested that last time in the comments, and while I considered it, personally I think that would have been too long strong a colour to work with everything else

As a boutonniere, however, it is perfect. Again, stronger colours can work here where they would not elsewhere.

In closing, a small plea to keep flowers small, even at weddings. No one needs a massive, artificial arrangement that weighs down the whole lapel. Keep it light, keep it small and keep in natural.

Apologies if you’ve said before – but where is your pocket square shown here from?

I disagree that the flowers aren’t fussy, and I think that they draw more attention than double-breasted waistcoats, tie pins and collar pins. I also think the tiny flowers are too small look out of proportion with the lapels. I like the more traditional carnation, but it can indeed be harder to wear the bold colours you mention in a large flower. I certainly agree that the flower arrangements are to be avoided. You also say that “cream is rarely worn elsewhere” other than in a flower, but many of my shirts are cream. If you don’t have any cream shirts, it’s a classic I think you should consider. I think it goes with many things better than white does. I think white shirts can often be too harsh during the day, but cream gives a similar but softer look.

Thanks Matt, we clearly disagree on a few points.
I have owned cream shirts, yes, but I’m not a big fan.

Yes, it can be affected by complexion. White will always look more formal too, just by virtue of its contrast.

A buttonhole is never fussy on formal wear such as Morning dress or a dinner suit. I think it also looks celebratory at a smart summer party with a lounge suit. I wouldn’t wear one apart from those occasions.

Considering that we live in an ever more slobbish, casual society, I think we should celebrate those who make an effort in their dress (attention-seeking dandies aside).

Obviously not the kind of thing you’d wear to the office but I think it’s a great look for certain formal events (weddings being the most obvious.) That said, I always worry they will rub and stain the lapel, especially with small delicate flowers like those pictured. I’m assuming you don’t wrap the stem with anything for extra strength?

No, though I don’t have any issues normally

Tenuous link to my question, but you mentioned weddings and I’ve recently attended two wearing separate trousers and jackets.

I prefer not to ‘wear out’ suit trousers by wearing them as separates, especially when there may be something resembling dancing involved. To this end, where can one buy trousers on the high-street which are not low waisted as most are nowadays, but without being designedly high waisted as has become a recent micro trend?

I know it’s the photo. But those lapels look as though they need a good press. B

Yeah, the photo and the 9-ounce Scabal linen. Lovely stuff, but it does tend towards the paper bag look pretty quickly

For my money, this is an altogether perfect outfit: lightweight and casual enough for summer, yet dressy enough to be distinctive. This is a man of style.

Forgive me if this question has been asked before. I need to take a formal business head shot for marketing material. I was considering a charcoal suit with either solid blue or white shirt. Can you give any guidance on tie that is best? Rep tie, subtle pattern, etc? I have read several of your posts that suggest that blue looks better on most people even though white is the most formal. I really like your Drake’s grenadine ties but I don’t think I can order in time. I had thought that a solid green tie might be best. Many Thanks.

Hey Darren,
For such a shot you want to look smart and professional, but without even a hint of dandy. The suit should not be noticed. So yes, dark suit, plain white or blue shirt and either plain tie or one with a small pattern. Colours etc don’t matter that much, just dark and conservative. And, sad as it is to say it, I’d avoid a pocket square

Also – would you mind including suggestion on pocket square?

Hi Simon, excellent piece as always (how do you do it- just as one subject is covered something welcome but unpredictable is covered next – I guess it’s why we all look forward to reading the site). Perhaps an obvious question perhaps but where do you source the flowers from? I ask as the current trend in floristry is for larger blooms thus the smaller blooms, for those without a garden, are hard to access. Given this what is your opinion of small imitation boutonierres, are they worthy of consideration?

I’d stick with small ones, but I generally source them from my own garden – or parks etc if walking through

where is the tie from?

Hi Simon, thanks for your article, I know this is several months old now but I’ve been asked to advise a friend on what to wear for his wedding in June and he’s set on wearing a green tie with a red rose on his lapel. Usually, I avoid strong red and greens together to include softer versions such as pastel pink and pastel green or dark green and burgandy but he’s sure. The rose is (contrary to your advice in this article) a fairly big flower and I’m concerned it’s all going to look a bit garish. Any advice on how to tone it down in the rest of the outfit? He’s not usually a tailored sort of guy (age 27 and one suit from high school graduation!) and so I was thinking a grey DB (he’s a rectangular build) with white cutaway shirt and white linen pocket squre, grey socks and Black oxfords and white and grey cufflinks would work. Would this meet with your approval?

That sounds good on the overall outfit, but yes I’d be very concerned about the strong red and green. Much better to have one of them more subtle