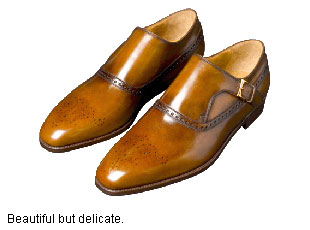 Many people a sartorial bent idolise Berluti shoes. And well they may. Olga Berluti designs beautiful footwear that stands out for its sleek lines and subtle patinas. But there are many questions over the quality of its construction.

Let’s start with the certainties. Berluti shoes, like many made in Italy (they are constructed in the Stefano Bi factory outside Ferrara, though designed in France), are Blake constructed. This means that the shoe’s upper is folded underneath itself and sewn directly onto the sole of the shoe, unlike Goodyear welts which involve sewing the upper onto a new ridge of leather, before attaching that to the sole.

Most English shoes and their American heirs (Alden, Allen Edmonds) use Goodyear welts. They make the shoe more water resistant and tougher. They also make it easier and quicker to resole the shoe. So Berluti shoes are less likely to stand up to rain and general dampness.

They can be resoled, but it requires a Blake-specific machine. Cobblers that use these can be hard to find, but then if you’re going to pay Berluti prices for shoes you should really send them back to the manufacturer to get resoled and rebuilt to maximise their longevity.

The advantage of Blake construction is that the sole can be cut a lot closer to the upper, leaving less of a lip and making the design sleeker. The width of a sole around the upper varies hugely among Goodyear-welted shoes, but none are quite as thin as Blake-made models.

Blake shoes are not necessarily of inferior quality. Although the technique was originally created to make it easier to produce shoes in a factory, and some very poorly made Blake shoes are churned out in Italy, the top quality lines are expertly made.

But they are more delicate. Quite how delicate Berluti shoes are is a matter of some debate. Some say they have worn them for years without any major problems. Others report that they wrinkled badly and did not hold up well to continued use.

In an online forum intended to discuss such matters, one Berluti enthusiast said “I have been a customer since 1998. I believe their shoes are very well made, there are a couple of pairs I have worn for a long time and they are holding up beautifully.”

A more critical customer pointed out: “One issue with Berluti ready-to-wear is the use of Venezia leather. According to Berluti PR, this leather allows for the beautiful patina available on Berluti shoes. Unfortunately, it is also quite thin and delicate, which means that they can look very wrinkled after some wear.”

I just changed from being a dedicated John Lobb customer to Berluti. So far, I am a big fan of the quality of Berluti. I found that with my Lobbs I had to resole them at least every 12-18 months. Not the case with my Berlutis. One year of hard wear in NYC for my Andys and no sign of a resole requirement.
In addition, with Lobb, they have to go back to the factory to be resoled, it takes at least 8 weeks and costs close to 40% of a new pair. with Berluti, they do it in the store (where there is a workshop) and it takes 2 weeks.
also, when buying a new pair, berluti can alter the shape to your foot slightly, aswell as alter the color.
As far holding up to rain etc., there is no material difference between the 2 (I have Lopez and Ashley Lobbs).
Incidentally, great blog, just post more often!

Thanks for your experience on Berlutis, anon. It’s great to see some really good feedback on their sustainability.

How often do you wear your Berlutis out of interest – in that one year of ‘hard wear’ for instance?

How would you keep a shoe, similar to the one above, that varies in shade across the shoe polished? Would you chose a main color and stick with it? The shoes I’ve attempted to polish that posses some colorful depth have lost their luster over the years.

Berluti recommends a yellow polish on almost all its colours. I prefer a neutral polish as this will not alter the colour of the leather at all.

I wear them between 2 and 3 times per week. On days where it is obviously going to rain very heavily, I try to leave them at home. I rotate 2 pairs of Berlutis and one pair of Lobbs during the work week.

I’m a big fan of Gravati, A. Testoni, as well as Alden, and Church’s. The former two are Bolonga/Blake construction, and the later are true Goodyear Welted. This gives me the best of both worlds, beautiful design, and higher quality. One for work, the other for evening. For sure I think Bontoni is one of the great hand made Welted designed shoes.
Ike

to put it rather colloquially, the high gloss can cause creasing/cracking… they have ways to prevent or minimise this, but i guess it can be very high maintenance… then again, all good things are.

oREPORT rai 3 last night it said Prada bags cost 20 euro to have made and cost 4,000 euro in MonteNapoleone and environs. Thgis was shown up.Made in Italy means Made in China as the chinese do most of teir outworking.These are the Chinese in Italy.Be careful as the example of Prada is mre than true.All the others do the same.
Shoesa are most likely the same