Leffot, the shoe store I described as “a gem in New York” almost a year ago now, is going from strength to strength.

Back then it had only been open a month and was still finding its feet. Now it is expanding its offering (quite impressive for a luxury store in these straitened times) and has hosted trunk shows with likes of Pierre Corthay, Tony Gaziano and Denis Dwyer of JM Weston.

Part of that expansion has been the addition of a few new lines, including Church’s women’s shoes and a few models from American stalwart Alden.

Church’s shoes for women only emerged in the UK in the past year, but they have already had a big impact. In the company’s financial statement it was reported that women’s shoes were a big success and almost flew off the shelves.

Indeed, I am slightly embarrassed to say that I have once or twice done a double take outside a branch of Church’s, looked lovingly at a pair of patent crocodile shoes, and only after a while realised I was admiring ladies’ shoes. Oh well. Perhaps they are just so slim they cannot help but look elegant.

Steven at Leffot says the patent crocodile-patterned shoes are the most popular, which doesn’t surprise me: womenswear tolerates a lot more experimentation and idiosyncrasy in this area. (That’s them, third from the left in the image above.)

The shoes are displayed on a leather Union Jack that Church’s gifted to Steven. Apparently a couple of sections for the new window displays were cut incorrectly, and they were offered to the store as a potential piece decoration. As it turns out, it couldn’t fit more perfectly on Leffot’s long slab of a table and does a rather good job of subliminally reminding customers of Church’s heritage. 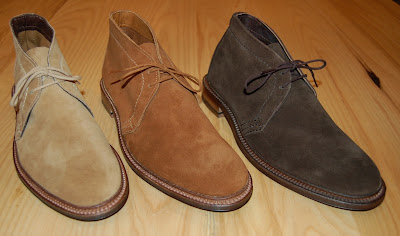 The second addition is Alden, which is the first American brand for Leffot to carry. The chukka boots shown in the photo below are my favourites of the selection. Somehow the heavier tread of these shoes seem more suited to workmanlike boots to my eye.

But then what would I know? I like women’s shoes.

Apparently the cordovan is very popular with the Aldens, which isn’t surprising given its heritage. One Leffot customer is so obsessed with the material he admits he can’t look at a horse’s arse without seeing a shoe-shaped hole in it. 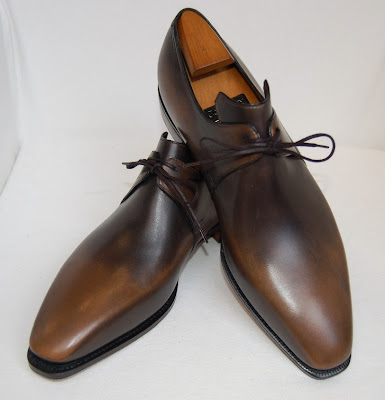 When I saw this it made me want to go out and buy five pairs of shoes immediately.

Thanks John. What did you think of the last one we did? Anything technologically lacking?

Weirdly Alan, this is the third time today someone has asked about RTW trousers, and we have a piece coming out soon by Manish comparing them all - so wait until then if you can!

Hi Christopher, A brief comment delayed due to a technological issue. Thank you so much for this post: a very interesting one well beyond introducing Seiji McCarthy, obviously a great shoemaker, to PS readers! I've really enjoyed reading it! John