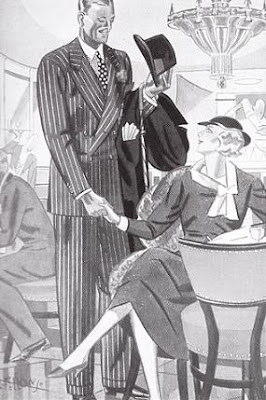 Something we predicted a year ago

Esquire, March 1935: “In the March issue for 1934, we introduced the black Homburg to this country. We said then that it was an established English tradition, having already enjoyed, at that time, a London run of about a year. It is only within the last couple of months, however, that this hat has been seen in noticeable numbers around New York, but its popularity is now showing almost daily growth.

The suit is another London favourite (as witness all the new pictures of the Duke of Kent) its two distinguishing features being the long lapel roll to the bottom button and the two seven-inch side vents. This one is in dark grey flannel with a white chalk stripe.

The rest of the outfit consists of a blue checked madras soft shirt with white starched cuffs, a starched collar and a black foulard tie with white polka dots, black blucher shoes, a single-breasted blue topcoat and fawn coloured gloves.”

Well, I’ve tried a Homburg and frankly it’s too much in a city where so few men where any kind of hat. A trilby or fedora is better suited and I’ll stick to my grey and brown Voyagers from Lock’s. However, I love the combination of blue (not navy, note) topcoat and fawn gloves. As if I’m not excited enough about winter as it is.

Well, at least you have the Homburg for use with evening wear.

I’m afraid it is the only time I get to wear mine.

Why not just wear the Homburg? Isn’t the point supposed to be that you will wear what others are too jelly-spined to wear?
I have a grey homburg I picked up in junk shop, near mint. I’ve worn it several times during the day and often in the evening. I don’t care what anyone thinks. I know deep down they want to do it too.

I’m with Roger on this – I wear my bowler in London if dressed for the office. Sure, everyone looks at you, but in winter, with an overcoat, scarf and gloves I feel under-dressed without it.

Isn’t it better – it’s certainly much easier – to wear any kind of hat with an overcoat (or raincoat) than with a suit alone? With the coat the look is classical – without it is (to me) plain anachronistic.