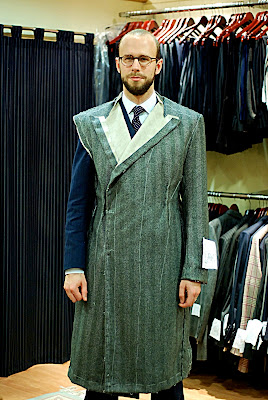 Right, it’s definitely overcoat weather now. It’s dropped below 10 degrees in London during the day and a scarf and hat just won’t cut it.

Of course, this is entirely the wrong time of the year to start thinking about a bespoke coat. Seasons should be reversed for most bespoke tailors – most can make a suit in less than six months so you should ordering winter clothes at the beginning of summer, and vice versa. (Unless you are in a different country from your tailor and have to wait for visits, in which case a year seems to be the best you can hope for. At least then the order feels appropriate to the temperature outside.)

However, I am aware that many readers do not buy bespoke suits yet and most probably wouldn’t buy a bespoke overcoat. So that means it’s time to hit the high street and get more immediate gratification.

While navy is the most versatile colour for an overcoat, a mid-grey is just as proper with demonstrating a touch of personality. Get something with a little surface interest, like a herringbone or a heavier weave – Donegal tweeds also work very well.

I didn’t follow my own advice with my first bespoke overcoat – a camel-hair polo coat made last winter – but then I did already have a decent navy coat sitting in the wardrobe. 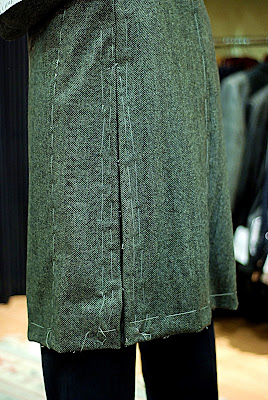 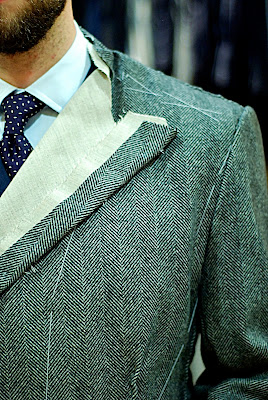 The coat pictured here, like the camel polo, is being made by Graham Browne. As I’ve said many times before, there’s no better value I know of for bespoke in London – proper cutting and a slightly more economic make for just £850 a suit. They can also turn something around in less than six weeks, so it’s not quite too late to get an overcoat made. January and February are the coldest months anyway.

I almost resisted adding any bells and whistles to this commission. At the last minute I added reverse pleats in the side seams, which will give the coat a little flare in the skirt. It was the first time Russell had added them to an overcoat, but he did a sterling job. You can tell Russell is up for a new idea, just look at the Rommell overcoat pictured here: an exact replica, just in pink. 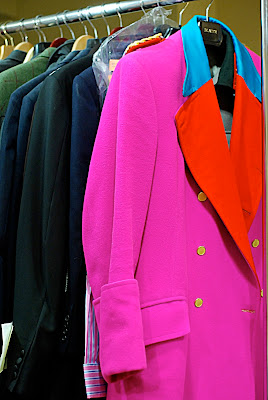 My herringbone coat is cut two inches shorter than the polo, will be half lined and is in a slightly lighter cloth (Bateman & Ogden coatings, number C59, 600g), so will hopefully serve as an intermediate coat between that and the navy – which, being ready-to-wear, is little better than a topcoat.

Go buy an overcoat. Nothing else makes a man feel more complete. 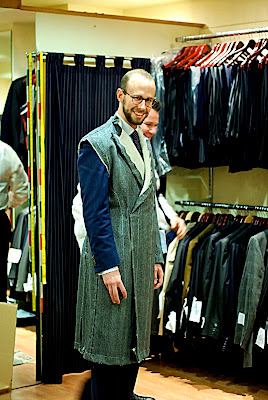 You can follow the discussion on It’s time for overcoats by entering your email address in the box below. You will then receive an email every time a new comment is added. These will also contain a link to a page where you can stop the alerts, and remove all of your related data from the site.