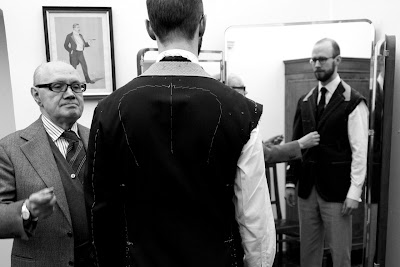 At the end of next week The Armoury will he holding another trunk show in London, featuring Florentine tailor Liverano & Liverano, Spanish shoemaker Carmina and glasses maker Nackymade. It will be held at the Rook & Raven gallery, just off Tottenham Court Road, on April 20 and 21.

Carmina makes great, staple shoes and Nackymade is a one-man designer and maker of rather quirky glasses. I know Liverano & Liverano best, however, having met Antonio a few times and visited them in Florence (above). For a detailed description of that, see the article on The Rake here.

As a general description of the style of Liverano, the jacket is short and clean with slanting front darts slightly off to the side to add shape to the waist. The shoulders are slightly extended, unpadded and cleanly made, while the front quarters cut away quite strongly. The trousers are slim with a strong taper and worn with no break or only a slight break. This is just the typical look, though, and Antonio will emphasise or de-emphasise certain aspects to suit the customer’s build or character.

For some great examples of Liverano suiting, and generally for inspiration, see The Armoury’s Tumblr account.

The link to the Rake Article isn’t working. Can you upload the article via a pdf link or have the link fixed? Would love to read the article about your visit to their shop in Florence.

Yes, the Rake changed their site a while ago and didn’t redirect the old links.

I don’t have the article itself anymore, but there’s plenty on the site about Liverano:
http://www.permanentstyle.com/tag/liverano-and-liverano