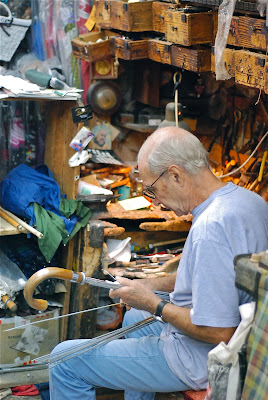 One of the pleasures of revisiting Naples was catching up with friends, such as Mario and Mario Jr at Talarico. My ego has never swelled to the point where I assume such men will remember me, but this does have the nice result that I am frequently and pleasantly surprised.

Mario Jr is active on Facebook and elsewhere, and was appreciative of the coverage the family has received on Permanent Style and in The Rake magazine. My last visit, of course, was with a photographer for my book, True Luxury, which will be out next year. 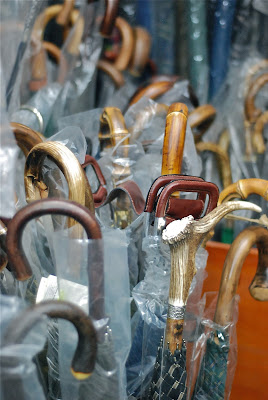 Somehow I can never believe that both Marios are there in the shop every day, working away at their umbrellas, and that I can pop in unannounced. Such is the contrast between the quotidian nature of craft and the celebrity-like aura we create around them. Maurizio Marinella is perhaps the ultimate example: a genuine celebrity, friend to the rich and famous, yet always there in the store behind a cardboard box of ties.

Indeed, I think the whole of Naples has something of this humbleness to it. The crowd at the Rubinacci opening party the other week were fabulously dressed, all dark tailoring and bright-white shirts. This was the big party for the first family of the city, after all. But children were running around; elderly couples mixed with the glamourous sailing set. There were five hundred people, all perhaps with a touch of the peacock about them, but barely an ounce of pretentiousness.

Such a heartwarming article. I fully agree with that combination of peacockiness and lack of pretentiousness. The essence of true style.

These guys at Thread Brighton in UK are selling lovely examples at under $100. Is there a catch? I bought one and it looks genuine and seems very high quality – but 1/4 of US prices? Really?

I was in Naples last weekend (where I also did a baste fitting with Luca), and stumbled on Mario’s shop which was five minutes from my hotel. Lovely umbrellas – ended up by a beautiful lemonwood one, and dragging it back with me to the states.

Hi Simon. Do you know if it is possible to mail Talarico an umbrella for repair? If so, would you happen to know how i’d be able to contact them? Thank you.

I don’t know I’m afraid, sorry, and they are pretty poor on communication.

I wouldn't worry about that clash, no. The cream might be a little bright, but on a sunny day with a white shirt I'd imagine it could look great

They certainly plan to, yes