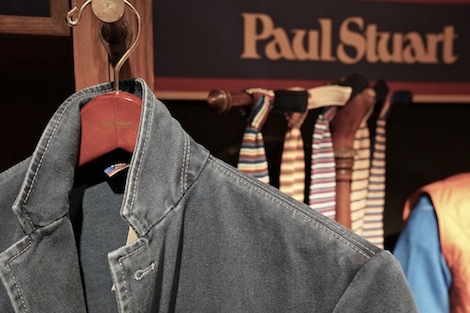 One of the greatest pleasures of going to New York is visiting Paul Stuart. It might be the only great men’s store left in the world. It is not a chain (five stores doesn’t count); it only sells its own clothing; and its scale makes it definitively a store, not a shop.
Perhaps most importantly, it is the only American brand I want and cannot get in London. 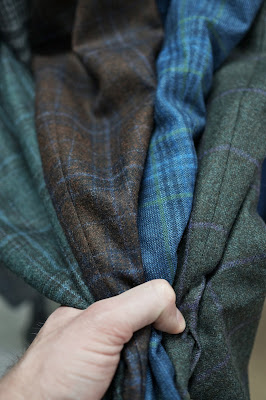 Talking to Ralph Auriemma only adds to that pleasure. There are precious few men’s designers who inspire you with their attitude to sartorial clothing. And too many of them work for Ralph Lauren. When I interviewed Ralph for The Rake last year, he was the creative head at Phineas Cole, the store’s younger and sharper label. This time he was preparing his first collection for Paul Stuart mainline.
This is a big step up: Phineas Cole only makes a few dozen pieces in a design each season. Paul Stuart makes hundreds. So what has he brought over from Phineas?
“A lot more colour and pattern, primarily,” says Ralph. “Plus more peaked lapels, three-piece suits and the unstructured aesthetic that have been key to Phineas. The fabrics are noticeably heavier too, which feels rather luxurious in today’s market.” The fabrics are indeed striking, with some suitings at 18oz or 20oz and overcoats way beyond that. 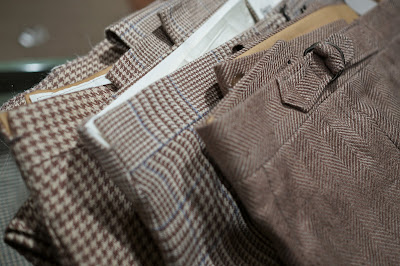 The variation in fabrics is also noticeable. This highlights one of the fallacies of bespoke tailoring. Because men have hundreds of cloth swatches to choose from, they think they get greater variety with tailoring. But cloth merchants are inherently conservative, and deal in small quantities. A brand like Paul Stuart can work with a weaver to create a truly original cloth because it has the power to sell it in volume. That’s why your tailor never offers you anything that looks like Tom Ford or Ralph Lauren.
There is innovation among cloth merchants, of course, particularly with ultra-luxurious worsteds. But it never has the variety or speed of change seen in RTW. At Paul Stuart, that variety is evident in the chunky linen/wool trousers above and the slubby linen jacket and waistcoat pictured below. 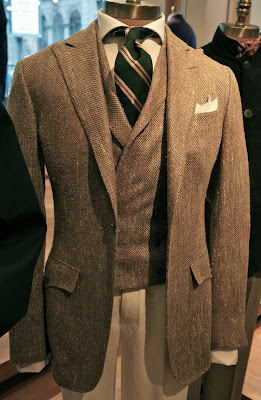 Interestingly, mainline Paul Stuart’s new colourful approach is more in line with what the store used to sell 15 years ago. “Somewhere along the line, it got a lot more conservative,” says Ralph. “We’re bringing that back – slowly at first, but customers will gradually begin to see something different alongside their navy and grey suits.”
Over the years I have bought socks, accessories and the occasional shirt from both Phineas and Paul Stuart. I was sorely tempted again on this trip. Nowhere in London will you see the racks of patterned over-the-calf socks on show here. Nowhere has such knowledgeable staff, particular on fit and alterations.
I’m looking forward to Ralph stamping his mark on it all.

You can follow the discussion on Ralph Auriemma takes on Paul Stuart by entering your email address in the box below. You will then receive an email every time a new comment is added. These will also contain a link to a page where you can stop the alerts, and remove all of your related data from the site.

I don't think I did make that distinction - do you mean the difference between woollen and worsted?

Hey Josh, Good point. Generally, dry cleaning a suit once a year is pretty good, so if you only do it that time, before putting it away for storage, then there won't be much long term damage in the long term from the cleaning. I'd…

Thanks. It's a pale blue poplin shirt from Budd, with a gold knitted-silk tie

Video: How a jacket should fit

Denim can be quite hard in that way - the shade makes a big difference. Usually, the issue is the colour of the denim is stronger, or more saturated than a normal business-type shirt. Try wearing it with more casual and strong colours such as…