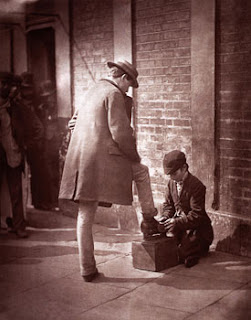 Walking along the Burlington Arcade last week, I took the opportunity to have a shoe shine. It’s rarely offered in London these days, which is a shame. So it was nice to support someone that’s making the time to set out there and ply his wares.
(Though I wouldn’t be surprised if he is subsidised by the Arcade itself – a shoe shine boy fits with the image of timeless London and luxury the owners doubtlessly like to create.)
It also occurred to me that I have never had one in London before. In New York, in Tokyo, in Singapore. But never in London. Probably just because one is more in the mood for extravagances when one is abroad – I often have a proper cut-throat shave when I’m in New York, and that’s not something I’d even consider in London.
But then the shoe shine wasn’t that much of an extravagance: £3.50 isn’t bad considering how much satisfaction a perfect polish on my Oxfords will give me.
The point to this piece, though, is that the shoe shine boy’s method was interesting (he wasn’t a boy, obviously, but no other word seems quite right after ‘shoe shine’).
I requested cream rather than wax polish, as the shoes in question could do with some nourishment. He insisted on doing both cream and polish, though, as the application of cream does take off a little of the patina created by layers of polish.
First, the laces were tucked away behind the tongue and each shoe was given a good cleaning – rubbed with a damp cloth all over and particularly scrubbed at the edge of the vamp, where it meets the sole.
Once cleaned, cream was quickly brushed on (brushed, please note, not rubbed with a cloth). It was brushed in circular motions, to work the cream into the leather and to make sure it didn’t miss any brogue holes.
Polish was then brushed on (which surprised me, I thought the cream would be buffed first – but apparently there is no need). A spritz of water was sprayed over the mixture – more efficient than the old spit-and-polish tradition – and finally the whole thing was brushed by two large, horsehair brushes, working in opposite directions on either side of the shoe.
To finish off the effect, a buffing with a cotton rag. Though apparently women’s nylon stockings are better.
Ninety per cent of that process I would have done myself, but the method and application of both cream and polish was interesting. Efficient, too. I walked away five minutes later with a smile on my face and my eyes staring admiringly downward.

2 Guest Comments »
Interesting. When the cream and polish were applied, what kind of brush did the “boy” use?

A small brush about three inches long and half an inch wide. I have a similar one that has two sides, one for dark polish and one for light. Three pounds from Church’s I believe.

Nice and fast. Great description. I, too, wish that street shines would come back in vogue. The quick and dirty five minute shine is a great to run off to an important client meeting when you’re doing the pitch. Confidence shoots through the roof with just polished shoes.

I also suggest the slow shines. You know, you sit, chat, smoke and relax for 10 minutes. Nice.

I love a good shine and I learned a trick from a shoeshine person in Washington DC. Skip cotton and buff it with a polypropylene or nylon sock. It gives a much higher gloss shine without too much wax buildup. Putting the sock over a horsehair brush does a great job.

The chap in the Burlington Arcade was £3.50? I’ve always shied away thinking he’d be really expensive.

I’ve had my shoes shined there because I read this blog. Very happy with the result. If I’m doing it at home, do I need one brush for application of polish and another brush for buffing?

when i am polishing a customers shoes i use a rag, cut up t shirt, around two fingers to rub the polish in, followed by a bit of neutral beeswax on the toecap applied with bare thumb, the heat of your hand helps melt it in.. then a soft horse hair brush to polish , and buffing with a soft cloth, and a nylon for final gleam. i am happy to do home or office visits and take pride in doing a good job sir. 07930152201 peter. high and mighty on edgeware road are opening soon and i will be offering free shoeshines to customers 17.00 till 20.00 on 14th october and 9.00 till lunch time on 15th october

free shoeshine with parade gloss, horsehair brushes and beeswax, i enjoy this work , used to have pitch at bank station, any new or returning customers welcome. i do an excellent job

Its something I love to have done whenever I’m down in London. In fact heres a photo of my last trip to the arcade:

Its a shame we don’t have any up in Edinburgh, but then I can’t think of anywhere dry enough to be comfortable doing so.

I note in london there is also a shoe shine “boy” just outside the Canary Wharf shopping district.