Yes, that’s right. It’s a picture of me cutting the cloth for my polo coat. Russell at Graham Browne realised that I just have a natural tailor’s touch and decided I would cut the whole thing better than him. Also, he fancied a cup of tea and a nice sit-down.

Not really. Russell was kind enough to let me cut just a few inches of the back piece for my coat. And even that I managed to mess up slightly, losing the second, lower piece of camel hair half way. It was a very satisfying feeling though. The shears have a reassuring weight and the cloth provides just enough resistance to feel you are working at it. Apparently the most satisfying materials to cut are light coatings and flannels for suits. The texture suits the work. The most irritating are cottons and corduroys, which “are gritty and feel like you’re cutting cardboard”.

The first decision to make when drawing up the pattern was whether to have the pile running down or up. You get a pile on heavier cloths that are woven a certain way, and it has a feeling just like fur – smooth in one direction, rough in the other. It’s the same effect as you see on velvet, just much subtler.

Most coats are cut with the pile going down, so it is smooth if you run your hand down the sleeve. But other tailors prefer to cut it going up, as there is less friction when you sit down and the coat won’t ride up as much. Favourbrook, for example, cuts its velvet jackets this way.

Having decided to cut the cloth with the pile going down, the same pattern pieces as for my double-breasted suit were used to draw onto the camel hair. A range of extra margins were allowed at various parts of the pattern – an extra 3/8 of an inch on the side seam (from shoulders down to the hem), 3/16 on the back of the neck, 3/8 around the sides of the sleeves and around ½ an inch at the shoulder. The waist is ½ an inch bigger across the front, as well as the “buttons apart” being bigger (this is the distance between the buttons; an alternative way to measure is “buttons stand”, which is distance from the side seam.)

Drawing the shoulder seam involves a bit of free hand, as the extra ½ inch is smoothed out at the sides. More free hand is also needed where the jacket pattern ends, drawing a smooth curve down to the hem. That in particular is a lovely long line, and demonstrates the artistry at the heart of tailoring, no matter how many rulers and patterns are used.

The split seam on the sleeves also requires a bit of extra work. Taking the normal sleeve pattern, the half-way point is measured at the cuff and at the bicep and then the other sleeve is used to mimic the curve from one point to the other. The curved ruler (which looks like an abomination to me, but apparently is one of the most useful things a tailor has) also comes in helpful to smooth the curve.

I was a little puzzled as to why Russell asked Dan to cut him three sleeve patterns. I only have two arms, after all. But as the sleeves have split seams, two of these patterns need to be cut in half, so each sleeve has four panels of material. The remaining pattern is kept with my others as the standard coat sleeve.

Russell also suggested putting in a permanent seam down the sides of my full-length pleat in the back. This is done using Clantex Supercrease, a resin that goes down the seam and prevents it ever flattening out. It is often used in the military to retain creases in coats and trousers (both Dan and Russell, now at Graham Browne, used to be military tailors).

Indeed, Dan was the first person to use the Clantex Supercrease when it arrived at their old employers. Having set up the machine and mastered its workings, he was nicknamed Clantex Superman.

So the cloth is all cut – first fitting (importantly, over my most bulky jacket) in two weeks. 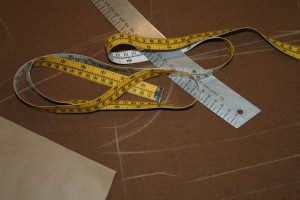 One side note: it was interesting talking to Dan about the costs of tailoring. Even those that cut suits for themselves end up paying upwards of £350 for the finished article, assuming the cloth is around £50 a metre (you need three), the jacket maker charges £100 if he’s feeling generous and the trouser maker costs at least £40; plus the cost of linings, buttons and canvassing. Considering the cutter’s work itself, suddenly the sale price of £650 seems like very good value indeed.

Russel looks very worried in the second picture. Just found your blog and have read every single post from your first one until now. Hopefully I’ll catch up my month’s end. 🙂

Thanks for the joyful read. Oh, and since I reside in HK, thought I’d make my first bespoke E.Talian. 🙂

You’d better take 3.6 meter for a suit, and 1 meter for additional trousers.
I always order 3 trousers, which allows me to wear the suit for 5 consequent days (2 days rest for each trousers to hang properly).

I'd recommend comparing the chest measurement to coat you already own Max, and if in doubt size up (as a raglan is meant to fit a little loose)