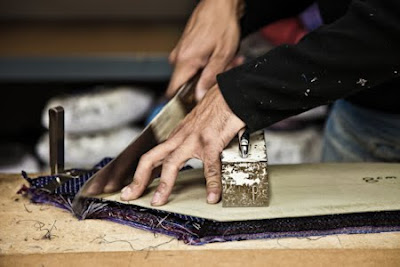 Traditional manufacturers often do things a bit differently. It may take more time, and it will probably be more expensive, but they think it’s worth it. On Permanent Style, that’s something I like to celebrate. This week I’m celebrating the way ties are made at Drake’s, specifically the way its silk is cut.

The more ties you can get out of a block of silk, the cheaper they are to produce. Original seven-fold ties were made of just one block (sheet). By squeezing them in and not cutting all of them on the bias, some modern manufacturers can get four out of the same sheet. Drake’s gets two (like most high-end tie makers today). That’s a pile of silk blocks you can see pictured below, weighted down and with the front and back blade chalked out. The back blade is on the left – you can see the slight flaring at the tip, a signature of Drake’s on its narrower ties (seven and eight centimetres). Notice how both blades are positioned at 45 degrees to the edges and so to the weave – that is cutting it on the bias. 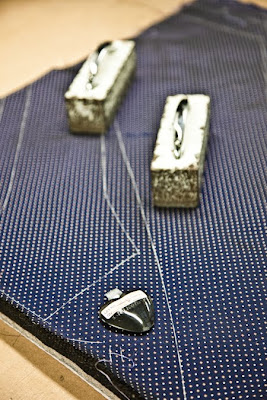 All this is really by way of introduction. Because what we want to talk about is how these silk blocks are cut up. The sides of the tie, those on the left and right of the blades you can see marked out, are cut by a handheld machine. It slices through the cloth very quickly and efficiently – that’s it being operated in the next image below, by Mario (a cutter of some 30 years’ experience). 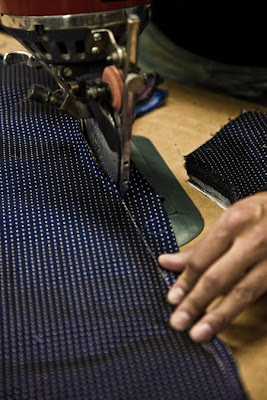 It’s fine to do those edges by machine, because they are tucked away on the insides of tie. The tie maker will fold over the edges, fold both sides together on the back of the tie and then pin it in place, before sewing it all up with one slip stitch.

But the small edges, those at the top and bottom of the blades (and the top and bottom of the neck, the third piece in tie, to which both the blades are connected) are cut by hand. “They’re more delicate and make much more of a difference to how the tie hangs,” explains founder Michael Drake. “At the front end of the tie that bottom edge is folded over very closely as well and has to be just right.”

So a sharp knife is used to cut these edges. That’s Mario cutting the edge of a neck piece below. He has to cut through around 40 sheets of silk here (the number ranges from 40 to 50, but that depends on the silk and its construction, so the depth of cloth is pretty consistent). The knife does not go through easily or quickly. It takes a few seconds and some back-and-forth; a bit like slicing through a large ham. 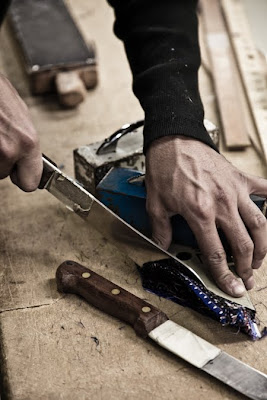 “We’re about the only tie makers that cut the silk by hand,” says Michael Drake. “It’s a small thing but we think it’s worth it.”

Mario’s mentor has just retired – the first person to retire from Drake’s since its foundation – but Mario has trained up two other cutters, Steve and Lily. So the tradition is in safe hands. 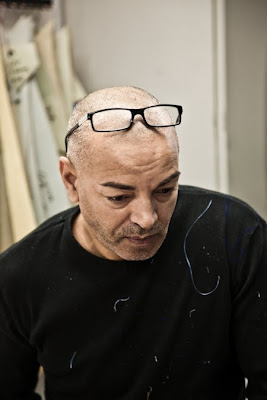 [P.S. The item in the foreground of the first picture is a Japanese chalk marker. It is full of chalk dust and has a little wheel that dispenses in on the cloth, just as sharply if not more so than an actual chalk. And it never needs sharpening. Michael is currently considering making a mint by exporting it to the world.]

You can follow the discussion on Hand-cutting ties at Drake’s by entering your email address in the box below. You will then receive an email every time a new comment is added. These will also contain a link to a page where you can stop the alerts, and remove all of your related data from the site.