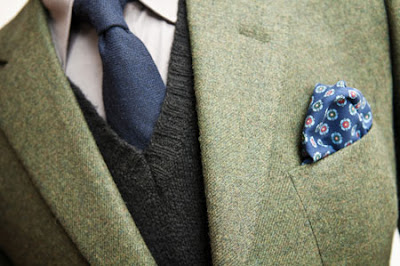 The proprietor of Norton & Sons gives his thoughts on dressing up and dressing well.

What’s the key to a great men’s outfit?

The great thing about the way men dress is we have so many bits and pieces we can put together. And if you’ve got an eye for it, a little bit of flair, you can lift an ordinary outfit into something quite special just by, you know, picking up the purple overcheck in a dark-grey Prince-of-Wales and accessorising that with your pocket handkerchief. Someone will see it, just catch that item, and they’ll think: ‘huh, I like that.’

Do many people do that these days?

No. I think it’s a real shame that we’ve got to the point where people who want to dress nicely feel embarrassed to do so. That they feel they can’t wear both a tie and a pocket handkerchief because of how it will be perceived. It’s depressing to me.

So few people get any joy out of getting dressed in the morning these days. It’s a shame because it can be a very pleasant, slightly introspective pause in your otherwise hectic schedule: ‘I’m just going to take 10 minutes and find the right tie to go with this shirt.’

I used to spend hours and hours swapping ties and things around. But you tend to find that, the older you get, the easier it is. It’s just experience like anything else. Our shirtmaker and has been on or around Savile Row for 35 years now, here and Jermyn Street, and he just has a good eye. You almost never see him wearing anything that isn’t spot on. And it’s never just a plain dark tie, a pale shirt and a dark suit. It’s always something with a little colour.

We try to express that sometimes in our shop window. There have been ones there recently with grey shirts and purple knit ties, as well as other colours.

Do you like knit ties as an alternative to silk?

Yes, it’s the sort of tie that gives a little more character. A printed silk tie is fairly ordinary, business-like. A woollen tie feels less dressy and makes you feel more comfortable. Like Lanvin’s ties – someone pointed out to me recently – some of which are crumpled and perhaps don’t make you feel like you’re actually wearing a tie. People would often wear a bow tie before they’d wear a silk tie.

I often feel the same way with woollen handkerchiefs. They feel much less dressy than silk.
Absolutely. Though more people are wearing handkerchiefs these days, almost more than are wearing ties, which is really funny. I’m glad they are, because you need a little bit of colour. If I take out my handkerchief, this automatically becomes a less interesting outfit. Without the tie as well, it becomes very dull. It’s something anyone could put together.

[Patrick is wearing a mid-grey herringbone suit, blue and white Bengal-striped shirt, pale blue silk tie printed with a white geometric pattern, and a silk handkerchief that is a mix of blue florals, cream and navy edging]

You can understand why men feel very uninspired by clothes when they see their peers walking around in just a suit and shirt, or most of the time just a shirt and trousers.

Exactly. If the trousers are beautifully cut and the shirt fits very well – as in it isn’t billowing out around your waist and flapping underneath your arm – it can look nice. But it’s rarely going to be that exciting. It needs something different. Wear a tank top or something that adds a little colour.

Something dark, dignified, but still with interest and sophistication – like a dark purple or bottle green.

Sure. My favourite colour combination at the moment is blue and yellow. We’ve got some really nice shirtings at Tautz in blues and yellows. Some nice bright ties too.

[E Tautz is the ready-to-wear label launched, or more accurately relaunched, by Patrick last year. Available in Matches and Harrod’s.]

Orange, too, is something I’m into. For the summer, perhaps pale blues as the base, indigo somewhere and then a very bright, citrus orange. Almost orange peel. Not a lot of it – just a dash of it, in a tie for example.

I saw you say previously that you are very influenced by what you see people wearing that come into the shop.

Yes, absolutely. It’s all the little details you pick up on. A little bit of colour here and there. Even if it’s just the edge of a pocket square that picks out something in the tie – just that little bit of thoughtfulness. And there’s one customer that always, always wears bright red socks. It isn’t going to match with anything, but it’s a statement.

Another wears his watch over his wrist, like Agnelli. He has his shirts specially made so I suppose it’s easy to get them to work with the watch. But then if you are as prominent in his industry as he is, you can get away with it.

Do you make mistakes in what you wear?

Sure, you shouldn’t be embarrassed by experiments. Particularly when I was younger. That’s what your childhood’s for really, making horrendous fashion mistakes. I remember they used to have a menswear section in the back of Elle, perhaps once a quarter, and I picked out outfits in there, copying them all exactly. I’d think, ‘oh I don’t have that blue tie exactly, so I’ll try something else instead.’ And it would end up being a horrendous mistake.

And then you would see yourself coming in the opposite direction the next day?

Well no this was Edinburgh, so the chances of that are pretty slim. But a lot of it is just trial and error.

There are some people, I suspect, that look at their wardrobe, pick three things out and look perfect. Other people pick three, decide against it, try another combination, reject that and finally decide on something. Still others pick out an outfit, walk out the door and look like a dog’s breakfast without knowing it. I think I’m in the second category rather than the first. There aren’t many in the first.

You develop staples over time, that you know work.

Yes, things you revert to. That’s where experience comes to play, because eventually you’ll have enough good outfits that they will all start overlapping. There will be a Venn diagram that over time has more and more things in the intersections as you add circles. Then at some point in your life you will know how to combine everything. I haven’t got to that point yet but some of my customers certainly look like they have, and they’re all in their sixties so I’ve got a couple of decades to carry on learning.

I think some people probably find it quite frustrating that they seem to spend all their time trying and never quite get it right.

Well then they need to walk around Savile Row a little and see what everyone else is doing. There should be no shame in just picking up on what other people do. I write it all down – if someone comes in wearing something really unusual that I like, particularly a combination of lots of different colours and patterns, I write it all down – shirt was this, tie this, suit, handkerchief, socks, shoes, everything. There’s nothing wrong with copying other people.

3 Guest Comments »
Hi Simon,
Good interview with the guy from Norton co,It really struck a chord with me,Ive recently been trying to make an effort to look smart lately.
Ive bought a couple of nice sport coats,shirts,trousers pocket squares etc,
I feel like im over doing it now when i go out. john Lpool,42

That’s an undergarment/athletic shirt here. I don’t recall the phrase from my year living in London. Is it a sleeveless pull over sweater?

Yes, it is a sleeveless sweater. As I have mentioned in the past, not something I am a gret fan of but you can’t deny its practicality – just as much as that of a waistcoat.

It is articles such as this that keep me coming back to this site. Thanks!

The biggest point in dressing well is to know who you are.Today I’m in a Milan work situation where it looks like everyone comes from the lower rungs of sofia. I’m wearing a handcut grey pinstripe and violet tie with black pois. I’m wearing Samuel Windsor Special offer plain brogues and guess what I look the business and the others look crap!
Dressing well means also assuming a tiny bit of arrogance

In my opinion a wool tie is more appropriate than a silk one for wear with a sports jacket, particularly a tweed jacket.

Last sentence reminded me of quote from Picasso “Good artists copy, great ones steal”. And I must agree with Mr Grant being able to be influenced by other people’s styles and fashion choices (in positive sense) is great talent in itself.