The copy of Men in Style I bought recently is proving a daily inspiration to me, so I thought I’d share some images with you here. While some of them will be familiar, they are often reproduced without the accompanying text, which is a shame. For as Woody Hochswender says in his introduction:

“The throwaway banter of the captions is incomparable, a form of compressed mini-literature, equal parts sharp copywriting and beguiling dialogue. The writer speaks in a confidential and detailed manner. The scenes are inevitably genteel. The voice is always baritone.”

I’m aware that other writers, such as Etutee on the London Lounge, have produced greater detail – reproducing the original Esquire and Apparel Arts. But hopefully these extracts from Men in Style will provide a useful resource. 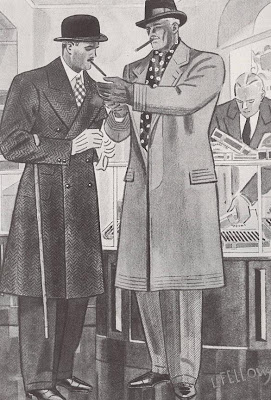 March 1936 They’ve long since taken our cigarettes, and, in salient features though sissified form, our pipes and even our pants, but the cigar counter is the last unfallen fort in the invaded land of man. All of which, though sad and true, seems to have a minimum to do with the clothes in question which are, on the left a double-breasted Shetland coat in a black and brown herringbone, cut over lines that give it something of the country air. There is an outside ticket pocket and a breast pocket flap, and the buttons are of leather. The coat comes an inch below the knee and has a slight flare. With it are worn a brown hard finished worsted suit, black blucher shoes, tan shirt with starched collar, a bold checked Spitalfields tie, buckskin gloves and bowler. The other coat is a fly front covert, worn wth a grey Saxony suit, foulard muffle, capeskin gloves, black town shoes and a green Homburg hat.

You can follow the discussion on Shetland and covert coats by entering your email address in the box below. You will then receive an email every time a new comment is added. These will also contain a link to a page where you can stop the alerts, and remove all of your related data from the site.