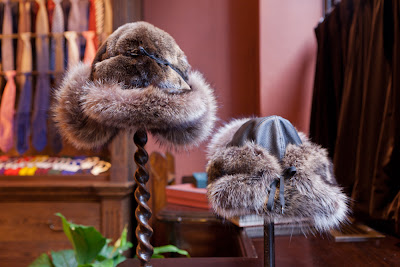 Anderson & Sheppard is opening up new premises on Clifford Street. And my, hasn’t there been a fuss. Those that have fussed the most might have done well to remember that A&S used to do ladies’ wear and ready to wear. (Which is why you occasionally find old A&S jackets that aren’t quite up to bespoke standards).

Not that the new shop will include either. No, it is to be a haberdashers. Always was. It’s a natural step, given that the Old Burlington Street shop is less than half the size of 30 Savile Row (where A&S used to be, and Boateng is now). More space is needed, and there are beautiful rugs, sweaters, umbrellas and hats (have you seen the hats? Racoon and rabbit!) in the new shop that need a good home. Bear in mind, too, that A&S used to sell sheepskin slippers from No 30; a haberdashers is not much of a departure.

Not that the new place will be based on the old A&S, either. Rather, its inspiration is the old Dougie Hayward store, when the great man was alive. For the driving force behind the shop is Audie Charles, Hayward’s assistant for 30 years and a woman who has dressed all the greats that that role implies. Audie talks with great fondness of the men who sought out the store’s accessories and knitwear, dressing gown and casual clothes. The key was the editing and the fit, with everything being made for the store.

Most of the A&S stock will also be made just for Clifford Street. We had a long discussion about the right waist size, armhole and depth of ‘V’ on a sweater. There will be casual trousers, casual shoes, holiday wear and lots of colour. The makers will be British and European, with some classic Italian summer pieces that you rarely see in London.

It will be what the A&S customer wants for the weekend or for travelling. The difference to Drake’s, just across the road, will be that the goods will be less classic, more unusual. The word ‘eccentric’ was used.

Much like Old Burlington Street, the desired atmosphere will be clubby, with comfortable furnishings and big fitting rooms. Much of the boxed-in feel of the back of the shop will be stripped out, to create a long vista. There will be curiosities, but not the wholesale offering of furniture or furnishings.

It will open next year; hopefully near the beginning. But then they haven’t even knocked the walls back yet.

hey Simon do you recall who made those hats for A&S shop? I believe you mentioned it a while back as being an Icelandic maker. I think A&S have stopped doing them now. Have you got any contacts for the manufacturer?

The fur ones were by Eggert

The materials will certainly tolerate it, but you will get something that is a rather different style as well as being lighter. Without any construction in it, the jacket will feel rather more casual and less sharp. There are certainly materials like this. Look maybe…

I would think it would be a synthetic, at least partly

What a lovely touch Tony

The Teba as substitute for a tailored jacket

The steamy social experiment that is a PS party