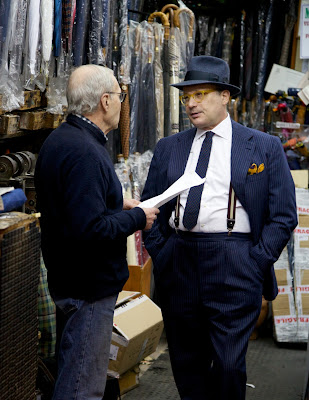 There are characters. There are dandies. And then there’s Giancarlo Maresca. A Neapolitan man about town, he knows everything and everyone, dropping in on a shoemaker here, checking in on some shirts being made there. Saturday, he says, is for such errands.

More seriously, Giancarlo has helped some of the great names in Neapolitan craft, working with them until they are – in his view – great artisans. At that point they are accredited by his gentleman’s club, the Nine Doors. It is a stamp of approval, and often leads to a decent up-tick in custom.

One such artisan was Mario Talarico, the great umbrella maker (above, left, with Giancarlo). Although a third-generation artisan, Mario’s high-end work was not getting the attention it deserved. Giancarlo worked with him, suggested a few things like using mother-of-pearl buttons and wrapping the rings that hooked on them, and added his name to Nove Porte roster. That was over 10 years ago. 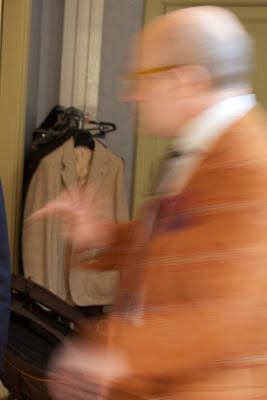 Giancarlo is also working with a shirtmaker and a tailor, the latter of whom, Enzo Carfora, we met while in Naples and will write about in greater detail later. But it was interesting to see the few pieces Enzo had made since he struck out on his own, mostly for Giancarlo, and how they had improved.

Giancarlo’s greatest strength, though, is as a conversationalist. Or orator, perhaps, for the other side rarely gets a look in. He is obsessed by cloth, and will rhapsodise about the way light plays on different weaves and textures. Cloth is all about light, he says. Look at the way it breaks up and disperses. Look at how much is absorbed.

The effect is improved by imperfect English. In describing the strength of a square, double-breasted jacket, he talks about its force, about its thrust. Clenched fists, plunging downwards, help refine the point.

Such a jacket is an example of Doric clothing, by the way, as in the architectural style. Most jackets, certainly DBs, are Doric, Ionic or Corinthian. Doric is for the masses, it is democratic and weighty (square and widely separated buttons). Ionic is elegant and light, ascending (a more diagonal button formation, pointing up). Corinthian is elitist, selfish and flirtatious (a DB buttoned at the bottom, with extravagant lapels). 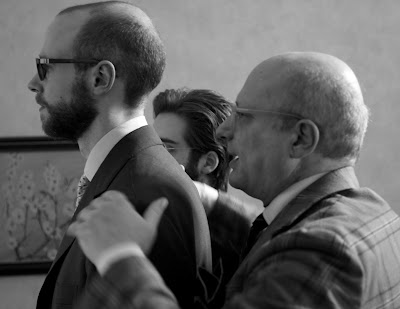 There are more serious theories. The difference between civilisation and progress, for example. Civilisation is the refinement of ideas; progress is faster internet access. Or the difference between quality and quantity in modern clothing. Men just buy more clothes and layer them because they know nothing about cloth. It was the American army’s fault – they replaced the adaptable European wool uniform with cotton T-shirts and jackets, intended to be layered for different conditions. That’s one reason why linen, tweed and flannel have fallen out of favour.

On the specifics of dress, Giancarlo is, unsurprisingly, very conservative. Cashmere is a material for overcoats or the home. Not a jacket. Madder ties are for tweed – the contrast is texture must come from a silk handkerchief, not the tie. Only specific types of glasses fit specific people or occasions: tortoiseshell is for intellectuals, silver for salesmen or politicians; gold is for evening, black is for lawyers.

Yet many of these conservative ideas are expressed in eccentric combinations. And this, I think, demonstrates the lightness at the heart of Giancarlo’s attitude. For while there are principles of dress, they should not be taken too seriously. There’s nothing wrong with pink tweed suit, leather trilby and yellow glasses. On a Saturday, at least.

Thank you, Giancarlo, for your hospitality. 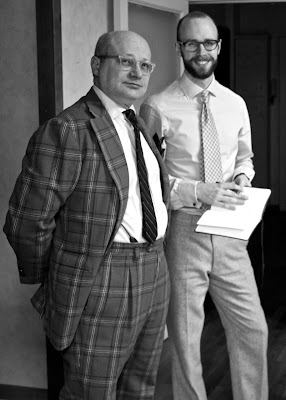 That last picture is incredible. What a character!

Is it a neopolitan eccentricity to wear braces with trousers that have belt loops?

No, but Neapolitan men do wear belt loops more and tend not to have a strap-and-buckle adjustor.

What a great style he has in that first pic. I’d like to perfect the flaneur look like that – some day.

the suit he is wearing looks terrible!

Dear Simon,
I do not how good your Italian, but you should really read the articles that Maresca has written for a magazine called Monsieur in the last years. Every month he has focused on a specific section of a gentleman’s wardrobe, its history and significance throughout the last couple of centuries, combining his sartorial wisdom with cunning reflections on the state of the world and the changing role of masculinity, and its progressive marginalisation.

I have read several of those pieces, though mostly with poor translations. As I said, I prefer the ideas from the man himself, in his inimitable language.

Hi Simon,
nobody without style can understand style. Not his permanent contents, at least. In Naples I saw closely how you work and I appreciated the very personal way to approach the matters. You observe without to touch, you ear without to judge. So the men and the materials can to express better their selves, so you can tell of it like an explorer back of a trip in wild nature, not like a scientist who must to dissection a frog to explicate her. Seeing myself through your lenses I know of me some new things, that the size of my ego on a side, and the captious commentaries of other journalists on the other, up to now obstructed me to understand.

I want just to rectify something about the glasses. Gold is sun, silver and white gold are moon, this is obvious, so golden objects love the day and white metals ones prefer the night.

Thank you Simon
and greetings from Naples

Thank you Giancarlo. As ever, you put it better in your second language than I do in my first.