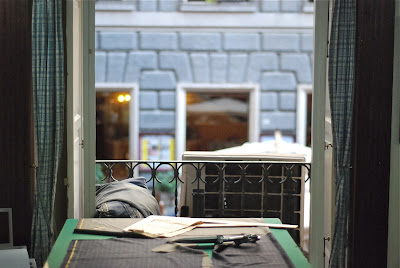 I love Gennaro’s cutting board, by the window looking out into the squareThis was the second fitting on a Solito jacket in Naples. Luigi, the son, was there the first time earlier in the year, and as he speaks some English we could ask rather more questions. But Gennaro (the father) and I managed just fine, with a few facial expressions and a the occasional “poco, poco”.
The cloth is a deep green wool with a red and navy check, from the Cacciopoli jacketing bunch. The colour was deeper than I remember, which was good as it will make it more versatile. It will have three patch pockets, four buttons on the sleeves, be half lined and feature a ‘spalla camicia’ construction on the sleeve. 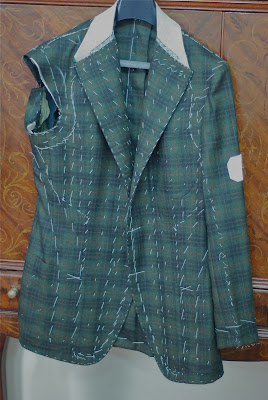 Although Neapolitan tailors are known for this ‘shirt sleeve’, as it is rarely done elsewhere in the world, they also regularly make suits with the seam turned in as on a regular suit. A reader was asking about this recently as regards Caliendo, another Neapolitan tailor I have featured. About half of the jackets on the rail at Caliendo I saw during this visit had a regular shoulder, half the spalla camicia. Solito was nearly all the latter. Businessmen sometimes prefer the regular shoulder because it is cleaner and more international.
The Solito fit was good, with just a little lifting of the sleeve required and a little cleaning up through the chest and waist. Ideally there would be a final fitting, but as I don’t know when I will be back in Naples again (and I will miss Luigi when he is in London at the end of the month) it will be finished off and sent. I can always have small tweaks made in London. 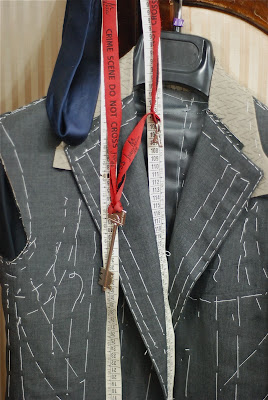 What can you tell us about the inner construction (canvas, etc…) ?

Scent of change in the air, i gotta go and buy some hot stuff:)

What, in your opinion, has made this jacket so versatile for you? I would assume the dark colour works like navy, and the checks pick up a lot of other colours. I ask because there is something similar, dark green Glenn check base with a dark blue over check, in the recent caccioppoli bunch which I’m tempted by.

Have a read of this post for more on it: https://www.permanentstyle.com/2017/06/wearing-black-in-a-sports-jacket.html