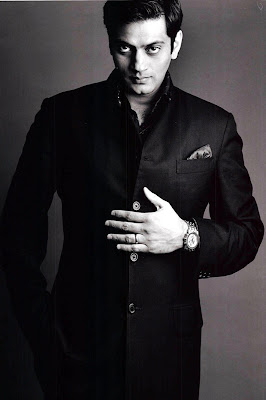 During my visit to India I met Raghavendra Rathore, a member of the Jodhpur royal family and a designer who worked with Donna Karen, Oscar de la Renta and Bill Blass in New York before returning to India to set up his own label. He presented two fashion shows during the celebrations, with the menswear show inspired by polo, as much of his clothing is. He is credited with reviving the popularity of jodhpurs and bandhgala (Nehru) jackets, both in India and abroad. He is also passionate about tailoring and reinvigorating traditional clothing crafts in India.
Tell me about your bespoke suits and the state of tailoring in India
Our suits are the most expensive bespoke in India, but they are still nowhere near the quality of Savile Row tailors. We have to cut many corners to get them down to a price people are willing to pay here. So there is fusing in the chest, for example.
Our four tailors in Jodhpur all know how to make suits by hand, but they have to work with these cheaper and quicker means to cater to demand. We make suits in around two weeks. We have fittings, but there isn’t the understanding of bespoke yet to justify greater time and expense.
I saw Tom Ford opened a shop recently in Delhi. He must think there is some appetite for very expensive suiting?
Yes, that was an encouraging sign. The next stage is to communicate the craft involved in bespoke and get people to understand the value of hand work. At the moment, if people see hand stitching on the outside of a jacket they think it is a mistake, or evidence of an alteration.
How are you going to communicate that in a place as vast as India?
Communication is relatively easy, if you can access the mass media. My costume work with Bollywood star Amitabh Bachan, for example, made jodhpurs very fashionable. The plan at the moment is to make personalised clothing more popular by selling custom wallets, buttons and other things. The buttons on our bandhgala jackets, for example, are interchangeable [using the same method as on my travel blazer] and we can have gold or silver versions made with individuals’ initials on them.
I am also working with the government to encourage local design and craft. We had a competition recently where we went through 15,000 submissions – and that had already been edited down – from people hoping to work in the industry. In one session a young man said he wanted to show us his work outside, in the sunlight. We all filed out and he had laid out his whole portfolio on the ground, drawn on leaves in the old way. The work was stunning. The challenge is to translate that raw talent into a commercial environment.
Are you optimistic about the future of tailoring here?
Absolutely. In the next two or three years I hope to switch all my production to fully bespoke, canvassed suits. The knowledge is still here, it’s just a question of awakening it. We are at the dawn of custom tailoring in India.

They’re not trousers, it’s a dhoti wrapped around the legs and lower abdomen.

A ‘full dhoti’ can be bought for a few rupees at any government khadi shop.

Then you’ll need someone to show you how to wear it.

Beware, there are regional differences…

Hi Simon,
This a very interesting post! Thanks! Fore sure there are outstanding taylors out there. Yet to move forward and make their craftsmanship attractive to their huge potential customers, they would need to organize themselves and think of setting up big events dedicated to celebrate their craft!
John

I’ve now had a couple of bespoke suits made in India. They’re almost as good as one made by an English provincial tailor, and about 20% the cost.

However the tailors, certainly in Mumbai, have all the business they can manage and have a major problem.

That problem is that the cutters are a specific caste.

As they get good jobs in a city they educate their children who then get decent jobs and no longer wish to be cutters.

As ‘cutter’ is a caste nobody from a higher caste wants to be one, and they won’t accept anyone from a lower caste…

India is always more complicated than you think.

Yes, the same thing is happening with shoemakers in Jodhpur.