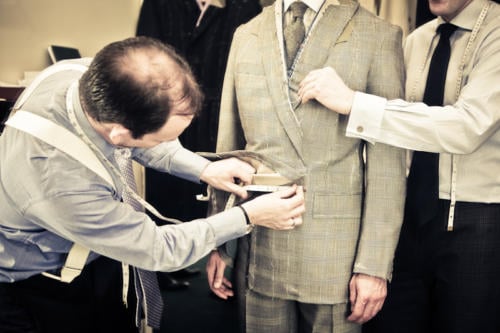 Tailors have lower margins than other retailers. Customers of bespoke accept that, and appreciate it. But how much lower are they?

In order to answer that question as much as I could, I got four London tailors – two on Savile Row, one off Savile Row and one in the City – to give me their costs anonymously. By comparing that to the retail price, we were able to come up with a basic production cost, as a percentage.

I focused on the cost of production because it is the most important, transparent and – crucially – consistent aspect. With tailoring, it is simply the total of cloth, trimmings, coat maker, trouser maker and cutter. This does vary between tailors, and certainly varies between countries, but it can be sensibly examined.

The full costs of a suit vary much more. Rent, most notably, from zero to three floors on Savile Row. Plus sales staff, travel, marketing, insurance, administration and so on.

So what is this production cost of a suit? For a house on or around Savile Row it breaks down as (on average):

Compare that to the average production cost in retail, which is 13% to 20%, and you can see the basic value of bespoke tailoring. (Numbers based on three different retail sources). A lot more of your money – twice as much in fact – goes into making the goods than with most things you buy elsewhere.

Interestingly, I also asked some City tailors about similar numbers, and their costs were lower as compound result of lower salaries, bulk deals on cloth, and particularly cheaper making. But as a percentage their production costs were also 30%-80% higher than Savile Row tailors. A precarious business to be in.

All the numbers above obviously contain potential for variation. You can see that even in the final cost, which varies by 20%. I also only focused on Savile Row, and only on the UK. But there is actually more transparency in bespoke tailoring than many other businesses, given the known costs of cloth and coat/trouser-makers. So we can get a better idea than in most industries.

You can follow the discussion on Bespoke tailoring: cost, margin and value by entering your email address in the box below. You will then receive an email every time a new comment is added. These will also contain a link to a page where you can stop the alerts, and remove all of your related data from the site.