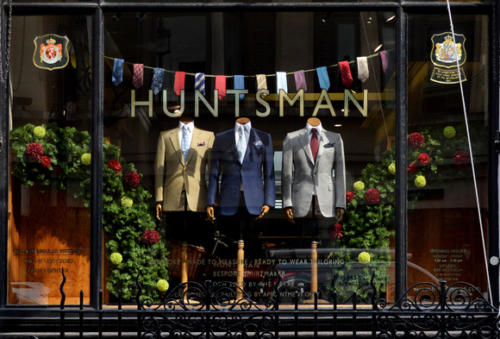 It was announced today that Huntsman has hired Campbell Carey as the new head cutter, to try and fill the hole left by Pat Murphy, who officially leaves this month for Davies & Son. Pat worked for many years at Davies before joining Huntsman.

Campbell was head cutter at Kilgour and Hayward previously, although both are smaller houses. He will also be joined by Robert Bailey, who comes across from Davies & Son. Bailey will be particularly targeted on growing Huntsman’s business in Asia.

Pat is the latest to leave Huntsman since it was taken over by Roubi L’Roubi two years ago. Peter Smith, the general manager, was the other big departure, going to Richard Anderson (himself ex-head cutter at Huntsman). Roubi has introduced several changes since he took over, including more women’s clothing, more ready-to-wear, and a relocation of the cutting team upstairs.

I always try to avoid jumping to conclusions when tailors or brands are taken over. New ownership and management has been good for many Savile Row houses, most recently Gieves & Hawkes. But it’s fair to say it will take a while for Huntsman to convince bespoke customers that they offer the same service without Peter or Pat. They will be big shoes to fill.

Huntsman is in dire need of new ownership. Their turnover of staff, both in the cutting room and workshop, is unprecedented and unsustainable. It would be almost comical, were it not such a historic and well-loved name in British tailoring.

Reading your post, it is not totally clear what the trouble is exactly at Huntsman. There appears to be a shift away from bespoke and more into RTW, be it male or female. So has this new strategy by management not been successful? Or are the bespoke cutters simply unhappy and now moving on because bespoke is no longer as important as in the past?

Or, really, have customers simply chosen to frequent other places on SR over Huntsman (e.g. is pricing too high, quality dropping)??

It varies from person to person, though I haven’t heard any suggestions of falling quality

Generally speaking, does RTW subsidise bespoke? In its absence, does the price for bespoke go up significantly?

It depends what you mean by subsidise. RTW has a higher margin but is also more volatile, and has more waste. It also requires more investment to get the volume of customers. Bespoke is more reliable and long-term. It can seem less efficient, but it makes a brand more likely to last decades rather than years

Simon
Are you at all familiar with Welsh & Jeffries or Tom Browne on the Eton High Street? Both offer bespoke at lower prices than SR and I was wondering if you knew anything about the quality, if they are Graham Browne standard, above, below etc.
Yours
H.R.

I don’t, but Welsh & Jefferies will certainly be good. Better than GB

Simon, in answer to the question posted about tailors in Eton. I have used Tom Brown and would highly recommend them. David, the owner/cutter trained at G&H I believe. They offer both bespoke and MTM. The quality of the work is very good in my opinion. I had bespoke morning dress made and am very happy with it. The other tailor on the street is Welsh & Jefferies. I have no experience of their work, but I do know that they have no current connection with Savile Row namesake. The connection is historical I believe.

And as for Kilgour…..