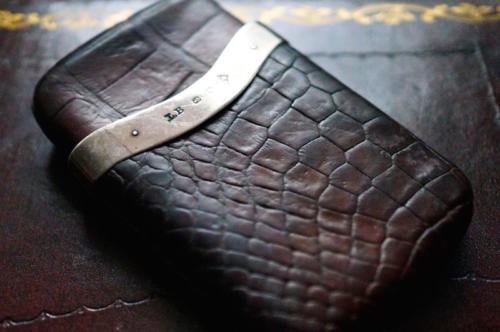 I’m a big fan of vintage leather goods. There’s nothing like a real, century-old patina on alligator or bridle leather; plus silver or brass hardware that you can let tarnish or keep polished and shiny.

Over the years I have bought a Louis Vuitton Alzer briefcase, a crocodile suitcase, and an innovative fold-up portfolio. My favourite, however, is probably my first purchase – this alligator cigar case.

It is my favourite for two main reasons: because it was the first, and because it gets used more than any of the others. The Alzer is pretty heavy (blame the brass and all those nails) and the suitcase can really only travel by car. This cigar case, on the other hand, perfectly fits an iPhone 4 or iPhone 5. For the past five years, I have had one then the other.

The iPhone 5 is of course thinner than the iPhone 4, but the silver collar is flexible enough to be bent a touch inwards or outwards to hold whatever it contains. And as the other half slips inside, it can accommodate a wide variety of heights.

Given how much I use my phone, the thing is taken apart and put together again repeatedly. But when all I have to carry is that phone and perhaps a credit card, it becomes effectively the smallest (and perhaps most beautiful) day bag in the world. 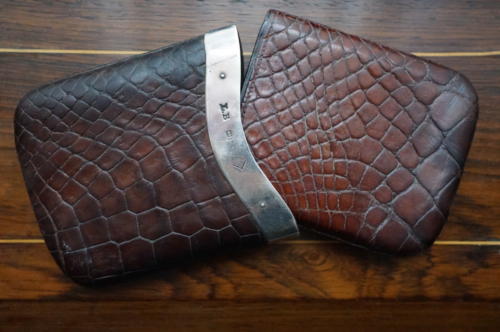 The case itself is made of alligator with (unusually) red stitching around the outside. It would have been used for cheroots and smaller cigars, popular around the turn of the last century.

The stamp and hallmarks allow us to get a pretty good of idea of when it was made and by whom. The ‘LB’ is probably the retail stamp of the maker; on the right-hand side there is also a diamond with three ‘Bs’ in it, which would have been his hallmark. If they had been the customer’s initials, they would likely have been engraved rather than stamped.

Looking up the LB, including the serif style and the position of the period, it appears to have been made by Louis Bloomfield, a maker who was linked to cigar importers Hunters & Frankau (they had the exclusive right to import Cuban cigars for a period).

The other hallmarks are an anchor (assayed in Birmingham), a lion (sterling silver) and, between them, a letter indicating the date. Unfortunately this letter has been worn away, but the shape of the anchor and lion narrows down the period to 1890-1899. (The designs of the hallmarks were changed every time the letters had to begin at the beginning of the alphabet again, and the square shape of the border narrows down the letters.) 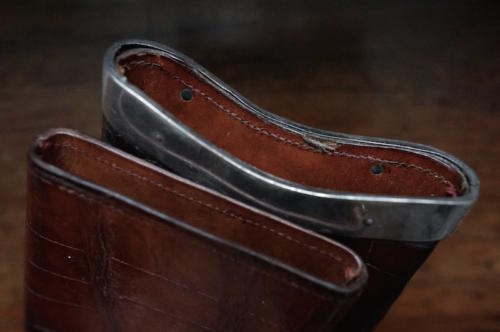 This case is from Bentleys, the fantastic London shop run by Tim Bent. They have recently moved, from Walton Street (which is becoming, like so much of London, just another parade of women’s designed brands) to Lower Sloane Street. When I was in this week they were still putting the finishing touches to the new store, but it should be open soon.

Of course, being in London Bentleys is expensive (a case like this would be £400). But I’ve always preferred to shop there with Tim, Julian and the team because the selection is so good. I’ve done my time hiking around regional antiques stores and there’s normally at least one thing I like, but it’s not quite right (usually damaged).

With that relationship comes great service. It was only this week that I thought to bring in this case and have Tim look up the hallmarks. And I know if anything ever went wrong with my suitcase or anything else, he’d always give free advice, and recommend a great repairs service. 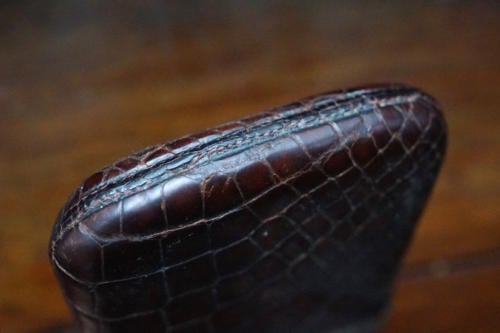 You can follow the discussion on The beauty of a vintage alligator cigar case by entering your email address in the box below. You will then receive an email every time a new comment is added. These will also contain a link to a page where you can stop the alerts, and remove all of your related data from the site.