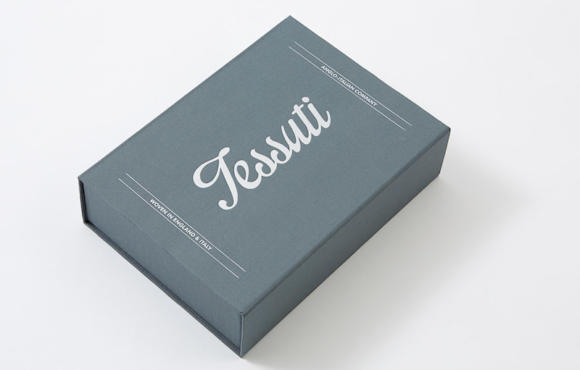 The headline news in this season’s round-up is the launch of Anglo-Italian cloth.

That’s right, the shop that does MTM tailoring is also selling cloth that customers can take elsewhere to have made.

The move was spurred, according to Jake [Grantham, co-founder], by the fact that many customers buy from them but also use bespoke tailors - and wanted to use the same cloths Anglo does.

Since it launched in 2017, Anglo has largely developed its own cloths - meaning that the materials you see in their shop aren’t available elsewhere*. And they are quite distinct: traditional patterns in very subdued, matte finishes, with a particular strength in jacketings (perhaps the weakest area among mills). 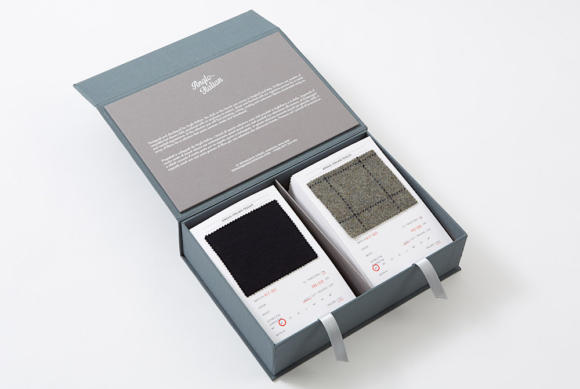 It’s an interesting move because it means Anglo is effectively competing with the mills it continues to buy from; and its biggest potential market is other MTM brands, who are also competitors.

But although this might limit the growth of ‘Anglo-Italian Tessuti’ I don’t think it will stop it working. Customers of tailoring are more used to buying cloth themselves these days, and taking it to the tailor. And top bespoke tailors are unlikely to see Anglo as competition.

At the moment, 29 tailors have the bunch in their shops, including Sartoria Corcos, The Anthology, Huntsman, Ciccio, WW Chan and Kathryn Sargent - and it’s still early days. (A full list can be requested from Anglo-Italian.)

Otherwise, you can go and see the bunch in the Anglo store in Marylebone, London. And they have sample lengths of each one stored nearby, so you can request one to be brought in. They’re actually shipped from two mills - one in Huddersfield and the other in Prato. (The Prato rather than Biella source is a whole other story.)

The cloths are available to buy through the Anglo site in units of half a metre - and you can request three swatches for £5. 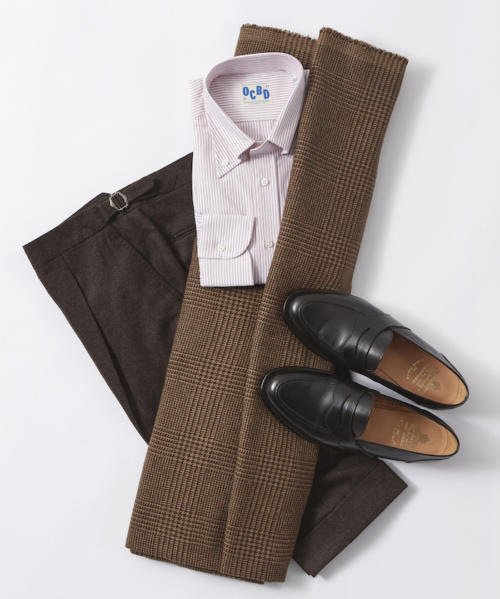 But what are the actual cloths like? Why should you buy a length from Anglo, rather than just picking from the standard bunches?

Well, around 90% of them are jacketings. And as I said, in my experience this is an area other mills often fall down. Both Italians and English have a tendency towards too-bright colours and too-strong patterns.

The obvious exception is tweeds, but the range of good summer or seasonal jacketings is surprisingly small, and often seasonal - only available for a few months. 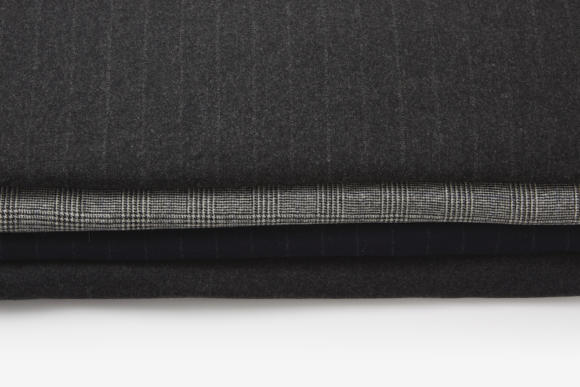 The Anglo-Italian jacketings cover a range of weights, patterns and colours, while always remaining subtle and classic.

Indeed, a regular bespoke customer might well feel that they recognise many of these, yet also find they’re difficult to source in reality. A big brown Prince of Wales with red overcheck; a deep olive with brown windowpane; a caramel-and-brown barleycorn: none of these are unusual, but they’re actually rarely available, and when they are it’s only buried among bright blues.

The taste level of the Anglo bunch, in other words, is very high and very suited to PS readers.

They will find that much of it is reminiscent of Ralph Lauren as well, but then Jake is happy to admit the inspiration - and those Ralph bunches you see in-store are usually exclusive, so unavailable unless you want Purple Label MTM.

The most distinctive thing about the style of the bunch, probably, is the dull, matte finish.

There is nothing here with even the merest suggestion of shine. Even the summer weights are matte and deep - which is particularly welcome, as it’s where most others are especially shiny and bright. I’d pick out 057 and 062 as some of the best there.

Apparently there is a particular finishing routine that all the cloths go through, to achieve this, which is why it is the most obvious thing that unites them.

Another distinctive element is checks that are so subtle, they’re basically invisible. Cloth 004 has a blue overcheck that’s deliberately put over the check itself, rather than in between, so it’s less visible. And there’s a good chance you could wear 035 and never even realise it has a check.

Personally this appeals less to me as a design choice, but I’d still always prefer the checks to err on the side of faint rather than bold. Most mills go too far the other way. If nothing else, it’s easier and more exciting to sell. 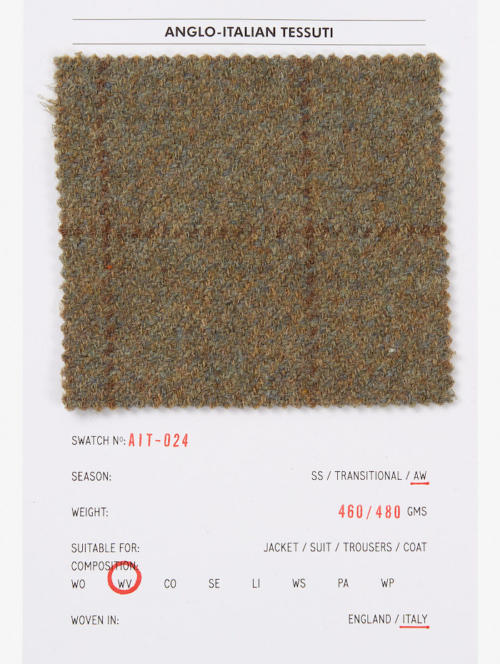 There are several other things about the Anglo collection to like.

One is that the swatches clearly state whether the cloth is intended for a trouser, jacket, a suit, or some combination. Given how many readers ask about weave density of high-twist wools, and which work for jackets, this guidance could be useful.

Second, the whole bunch is extremely wearable. This was deliberate: the jackets are largely dark enough, and narrow enough in colour range, to all go with a small range of trousers - in perhaps khaki, grey and green.

And last, there are some labelled as ‘transitional’ fabrics.

In a temperate country like the UK, these are easier to wear than most tweeds or linens. The only jacketings that are really three-season.

My favourite among those is 070, which is also notable for being a wool/cotton blend (never any silk, helping with the lack of shine) with some polyamide added for strength. I tend to dislike synthetics, but more out of wariness than anything else (see interview with Mike Stoll recently). I trust Anglo that the polyamide is here for strength and nothing else.

Given this focus on Anglo, the round-up of other Spring/Summer seasonal fabrics will be very brief this time, but I would quickly highlight:

A welcome return for my two favourite colour combinations/patterns for summer, from Loro Piana, and a surprisingly appealing bright yellow.

The first is a really intriguing brown (if I don’t use this can someone else please? I really want to see how it makes up); and the second a bold summer suit.

The meaty high-twist of SpringRam is great for English-weather suits, and the bunch was reissued in February with a whole range of new colours, and several Prince of Wales checks.

*In fact, this is a significant difference between different MTM companies, and one we don’t focus on much. For example, Stoffa largely uses its own cloths, whereas Saman Amel largely uses bunches. That means the Stoffa ones are exclusive, but sometimes also narrower. There’s more of a design angle.

You can follow the discussion on The best cloths of Spring/Summer 2020 – featuring Anglo-Italian by entering your email address in the box below. You will then receive an email every time a new comment is added. These will also contain a link to a page where you can stop the alerts, and remove all of your related data from the site.

I haven't considered one to be honest. I'd suspect it would stand out a bit more than you'd want. I'd recommend something darker, a mid-brown or darker, or navy, olive etc

How to buy a quality panama

I haven't seen 2 or 3 in person, but I'd worry they both look a little smart - slightly crisp fabrics. But 1 is also much more casual, more like workwear almost

A high rise trouser will be more accommodating to the, ahem, better endowed.