What makes one machine-made product better than another?

At Permanent Style, the fact we cover mostly smart clothing, and mostly high-end, means handwork is often a sign of quality. Whether it’s sewing the welt of a shoe, or the chest of a suit.

But what about clothes that are entirely sewn by machine, and have no need of handwork? What makes quality there? Is it anything beyond cloth and consistency?

I spoke to Mike Stoll (below), the head of production at Private White VC - and importantly someone who has made for dozens of brands over the decades - to start answering that question.

This is also by way of acknowledging Private White’s award for best investment product, voted for by Permanent Style readers.

Readers say their PWVC clothes have worn well, been enjoyable to wear, and rewarded the investment. But why? 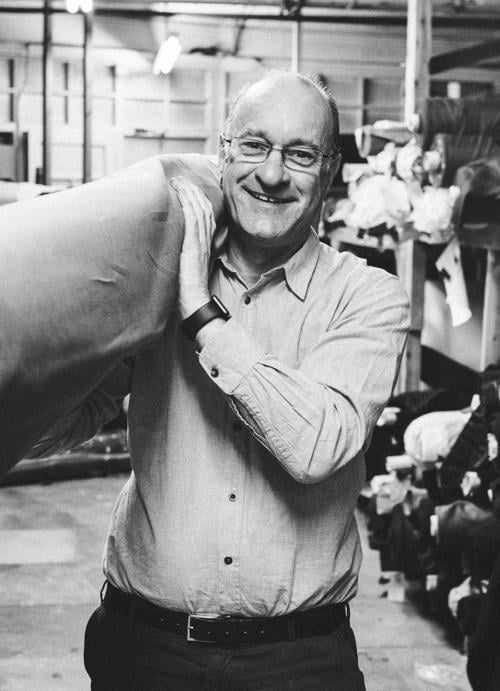 First off, the relevant comparison here is between humans on sewing machines, and automatic machines prepared and monitored by humans.

Large-scale production of outerwear, mostly in China, involves the control of a machine that cuts all the material according to a pre-set pattern, and then sews it in sections.

“So for example, one side of a coat might be laid flat, with pockets laid on top, and then fed into the machine,” says Mike. “The machine will cut the cloth, sew the pockets in place, and finish the edges. Then it will come out completed on the other side. For shirts there might be five people in the entire plant.”

This is opposed to a factory like Private White, where one person is using a regular sewing machine, picking up the pockets, positioning them, and moving the coat around a needle.

It’s not dissimilar to how shoes are made in Northampton and elsewhere - often referred to as ‘benchmade’. One human carefully manipulates the product in a machine, usually holding it throughout. 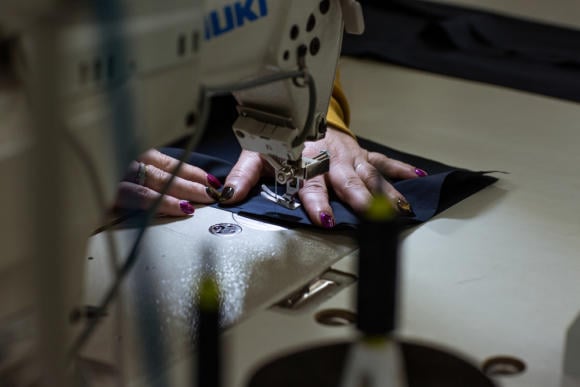 “The result of the mass manufacturing is garments that feel stamped out,” says Mike. “You see this from outdoors brands, and most high-street brands as well. It’s hard to describe exactly, but they’re simplified and two-dimensional.”

Pressed for an example, Mike talks about curves. Big machines aren’t great with curves. A pocket will pretty much always be square, and aligned with a square edge.

But someone working a sewing machine can position the curve of a welt breast pocket by eye. They can see where it fits nicely. Same goes for the curve of a collar.

Another example is complicated things like bellows pockets. You’ll rarely see them on products made on automatic machines - again, everything is simple and flat - and when you do they often don’t function as well.

The only risk of this human production is inconsistency. Automatic machines are more consistent, so a factory like PWVC is heavily dependent on skilled workers, good management, and quality control. 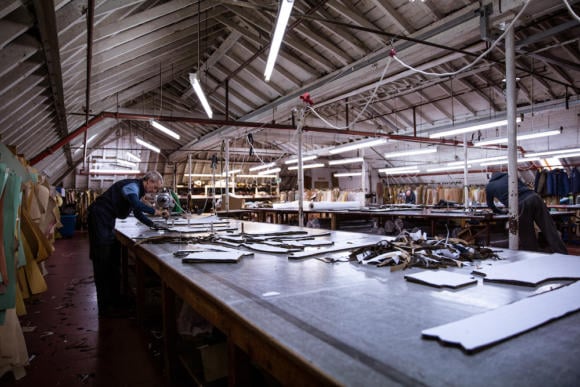 “Manufacturing is also a question of picking the most suitable process,” says Mike.

“For example, all labels are rectangular, and they all go in the same places. It’s quicker and actually better for an automatic label maker to do it - because they won’t leave a join at one corner.”

“We’re looking at investing in machinery to do that at the moment, because there’s no advantage to doing it by hand. But with most of these other processes, particularly on the outside of a coat, it’s better to have a person do it.” 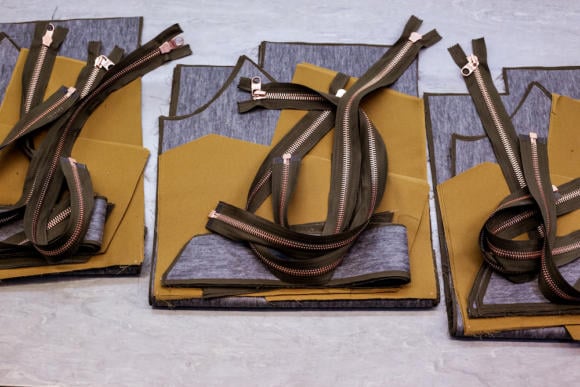 But do any of these things actually lead to longevity - to something lasting longer, rather than just looking different?

Stitches per inch don’t make much difference. An automatic machine can do just as many stitches per inch, and faster. Sometimes a very cheap garment might be sewn more loosely, but it’s rare.

What a person can do, though, is vary tension and needles as they work a garment, and realise different things are needed for different parts. They can alter the tension manually, and switch from a fine, pointed needle to a ballpoint if required.

This allows them to adapt when a particular seam shows it needs to be worked differently - or if the cloth itself varies. If you order a 750g melton, some of it will be 760 and some 740 (one reason large-scale production uses more manmade, consistent materials).

That adaption can make the garment stronger. And, interestingly, on those materials it can mean that the large-scale machine is actually more inconsistent - because it always does the same thing, no matter how the materials vary. 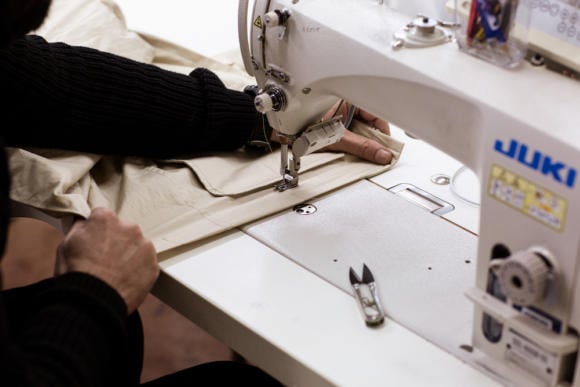 “I’ll give you a mad example. Say we’re making a heavy coat, in 800g wool for example. At the bottom the coat, the hem, you’ll get a bump, where the material is doubled back,” says Mike. “Our workers will take a hammer and whack the bottom, to flatten the fabric before they sew it.”

“Now you can create an automatic machine to do that too, but no one’s going to, because it applies to such a small part of just one type of coat. It’s not worth adding a whole extra piece of functionality. So the machine will just sew over the bump - or the factory just won’t make that weight.”

This last point is interesting because it echoes part of the recent article on Uniqlo knitwear. The older machines used by traditional knitters are more flexible, easier to adapt. That doesn’t mean they necessarily produce higher quality, but it does mean they can make a greater range.

Which is one reason cheaper products (particularly outerwear) all look the same. 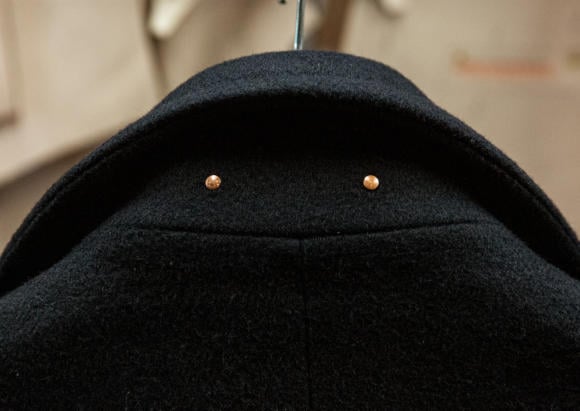 How about pure strength in a garment?

Well, Mike has a couple of examples. First, automatic machines will usually just do a ‘back tack’ at the end of a seam to make it stronger. Private White will also bar tacks, which are more reliable for not being part of the same run of stitching.

Second, the rivets they use (most noticeably, on the back of the collar) are not one rivet that punches through the cloth and the lining. Rather, they are two rivets, on the front and back, which screw into each other.

It’s unlikely the hanger loop that they secure will ever come under enough pressure to be tested. But maybe, 20 years down the line, it will. And then it will save the cloth from being ripped.

The quality of hardware like this is also fundamental.

In fact most factory managers would say that although make is crucial, it’s cloth and hardware that make the biggest difference to longevity.

Good hardware is not easy to identify, particularly as brands of hardware such as YKK offer a range of qualities. But Mike says you should trust your instinct.

“Rather than look for a name, just try the zip, try the pockets,” he says. “You should be able to tell between the top and the bottom of the market, how strong and functional those pockets feel. Do they seem like they’re intended to take real weight?” 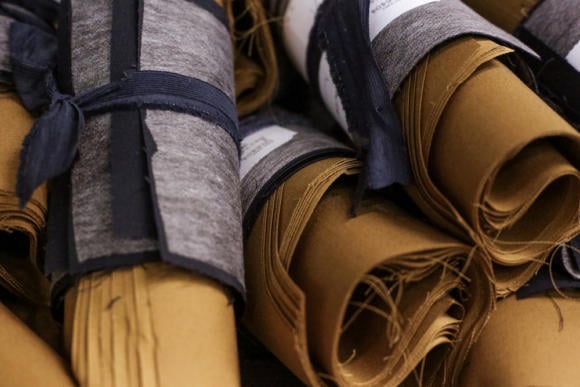 How does he feel about synthetic mixes in materials?

“We avoid using them. Some people say nylon is added for strength or water resistance, but 95% of the time it’s just cost,” says Mike. “The strength is in the yarn and the weave, and the water resistance in the finish. I could put Teflon on wool the same way it’s put on most nylons.”

He also likes using pure materials because they avoid ambiguity. The customer knows a synthetic hasn’t been added just for cost, or just for weight, for example.

“Look at the country of origin too. If something is made in Italy, rather than Romania or Portugal, it still means the vast majority of the time that the quality is better.” 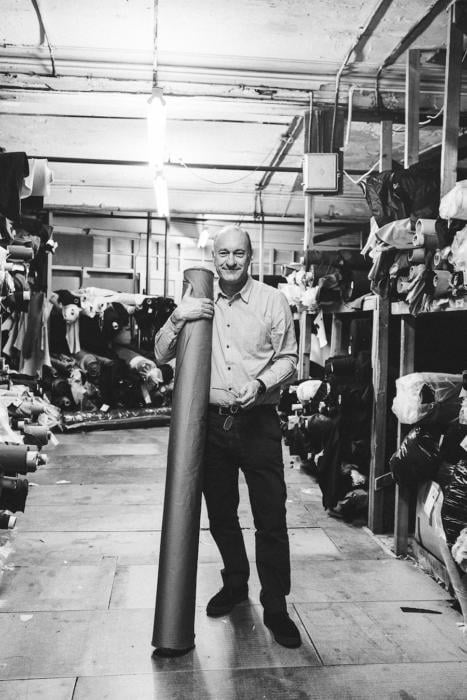 In conclusion, Mike says: “When you’re a brand looking around at factories, there will always be a cheaper option. “But is that really the attitude you want from your manufacturer? To always be looking for the thinnest material, the fewest steps, in order to be the cheapest?”

“Or would you rather have someone whose aim is to make the best garment possible? Someone who picks the best sleeve lining, the best pocketing, even if the customer will never notice for years?”

Fortunately, it seems PS readers are noticing that, and rewards Private White as a result.

Full details and lists of the awards here 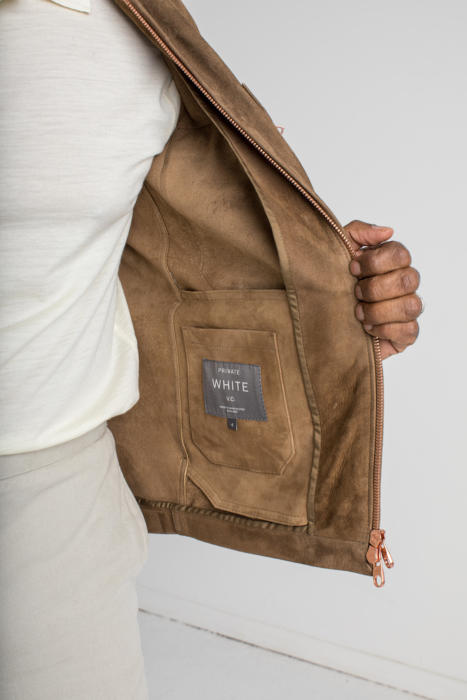 You can follow the discussion on What makes quality in machine-made clothing? by entering your email address in the box below. You will then receive an email every time a new comment is added. These will also contain a link to a page where you can stop the alerts, and remove all of your related data from the site.