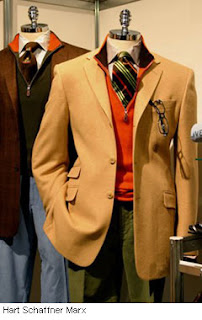 Window dressing performs a very different function in men’s and women’s clothing stores. In a women’s shop, its primary purpose is to showcase items that the store contains. It seeks to shows that its pieces are attractive and possibly unique.

This is not the purpose of a display in a men’s store. While there may be one or two items that attract you for their originality, the pieces will generally be too similar to those on offer in other stores to stand out entirely. Rather, it is there to display the creative intelligence of the men who designed the clothes and the brand.

The clothes are being bought for their cloth and their cut; for the subtle things that make one blue blazer infinitely preferable to another. The fact that the clothes inside excel in these areas is best displayed through the colour and texture combinations in the window. It is this that should take you inside. 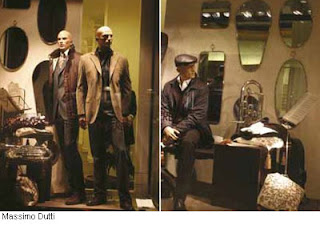 Inditex, the Spanish group that owns Massimo Dutti, Zara, Pull & Bear and others, understands this all to well. No matter what the quality of Zara clothes may be, the central planners at Inditex HQ make sure that you are lured inside by the combinations, even if they are a pretty stark variation on black suits, white shirts and skinny ties.

Massimo Dutti is even better. Consciously aiming for an older audience, its Mediterranean colours and linen combinations in the summer are almost inspiring. I’ve often felt forced to record some particular detail (green silk with a tan linen suit, a purple handkerchief with a blue blazer) that I would otherwise forget and never remember to use myself. 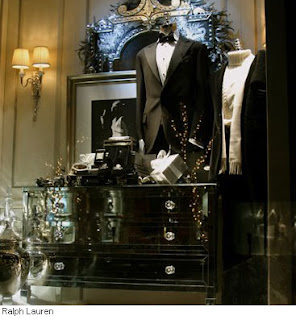 Ralph Lauren is of course a past master at this, and staff often refer to the detailed descriptions they are given of how to dress mannequins, both inside and outside the store. (It’s all about the pop colout!) By contrast, Armani windows are often startlingly bland. They persist in using almost two-dimensional mannequins, which the suits hang off rather than drape. Anyone who has been forced to put a suit jacket on a wire hanger will be able to imagine the unflattering effect.

Armani mannequins also seem to be uniformly grey, no matter what the season. And as with many other bad window dressers, they consider it needless to keep ties done up, let alone taut.

But let’s concentrate on the good dressers. Hackett is often very good, and this season features ingenious combinations of Safari-themed outfits – a buff, linen, 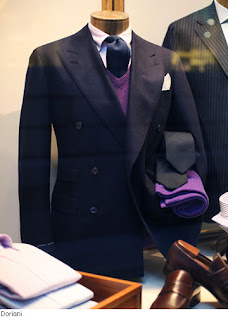 double-breasted waistcoat with a grey suit, for example. In New York, Bergdorf Goodman rarely puts a foot wrong, and it’s worth the trip uptown just to browse the windows. Doriani is also very good – as the double-breasted blazer opposite demonstrates.

In fact, this picture is a perfect example. All the items are plain, basic, classic. But the combination is exciting. It’s not that unusual; you may have seen something similar before, or feel you should have done. But the beautiful sculpture of it ushers you inside, convinced that everything the store sells will be of the best cloth and cut. It is creative intelligence on display.

P.S. Plaudits also for Domenico Vacca in New York, which seems to accentuate the beauty of already lovely shoes by tucking a different coloured sock or tie inside each. How the accent of lime-green sock brings out a chestnut oxford I don’t know, but it works.

You can follow the discussion on Windows on a designer’s mind by entering your email address in the box below. You will then receive an email every time a new comment is added. These will also contain a link to a page where you can stop the alerts, and remove all of your related data from the site.