It’s rare that traditional menswear retailers are genuinely innovative. A few designers have their odd quirks, and many fluctuate with the (fashion) seasons. But a precious small number actually change the way people look at jackets, shirts and trousers.

Paul Smith has original quirks. His suit linings were the first thing that made him popular in the UK, or at least the first that made him stand out. Bright colours, bright stripes and images of old-time footballs attracted men to suits for the first time in a while. Differently coloured buttons came next, as did one coloured buttonhole on the sleeves. Having fifties pin-ups on the reverse of belts and the inside of wallets was eye-catching.

Some of Smith’s innovations went deeper than that. I was a big fan, for example, of his dip-dye shoes – the technique produced truly deep hues of red and green in the leather that I’d never seen anywhere else. But they were surface changes. Little about design or construction changed in either suits or shoes. A harsher man than me might call them gimmicks. 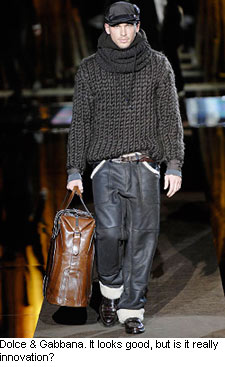 Equally, many other menswear designers innovate in the seasonal variations of their outfits. Every six months, the usual suspects of Hugo Boss, Dolce & Gabbana and others will have their hot style to tout. This fall/winter, D&G was obsessed with Sicily and the style of its local inhabitants, whether hunters, mariners or just butch-looking guards with dogs. There was shearling in abundance, bulk in the trousers and especially around the neckline, and bulky bags, hats and pets as accessories.

But is this innovative? It may be different to everyone else on the catwalk this year, but has no one had a similar idea previously? Will they not have the same idea again?

More importantly, much of this innovation is merely the accumulation of certain types or shapes of garment into a ‘look’. It is this look that is important, rather than much innovation in the garments themselves. It is innovation in aesthetic idea – the concept of sticking certain things together – but not in tailoring or structure.

The art needed to create an aesthetic vision should not be underestimated. It is, after all, one of the prime aspects that we admire in great artists in any field – whether architecture, painting or sculpture. But it is not what excites someone about picking up a jacket in a shop and discovering a genuinely new idea. That inspiration is very different to just a well-adorned mannequin.

I say it’s not innovation… rehashing two styles which are still the trendy styles of grunge/alternative/folk music in bulky ‘old man’ sweaters and their tighter indie-rock cousins and the baggy styles which still dominate hip-hop culture as well as working class counterculture, e.g., punk or what I’d have to designate DIY metal/hardcore culture (here I’m thinking of Dickies and workshirts) is not innovation… not to mention the simpler fact that all these designers have done is copy the getup of working cultures which dress a particular way out of pure utility. So we don’t even have to reach back into various subcultures to see to recycling effort.. perhaps even referring to those previous fashion cycles in some way encourages fashion designers since they believe, somehow, that they are ‘reinterpreting’ style. I’ll refrain from vulgarity, but really…

So where does real innovation come from? If we look closely we can trace the roots of the modern suit back over 500 years if we pay attention to the origins of vestigial garments like neckties. Even tailored jackets are a good two or three hundred years in the making… and those changes came slowly and were not daily wear in the lower rungs of the population until people had lives which didn’t conflict with wearing things like suits.. It’s funny to see the clash and interaction between formal dress trends, which seem to come from nobility and royalty, and casual dress styles which have come from the industrial sector and working class. Jeans, for example, or those baggy fishermen’s sweaters. So maybe we’ll have to see the invention of some new working class or profession or upper class that necessitates a new utility.. But when IT workers are simply t-shirt and jeans people, and ‘higher dress’ is still suit-based (I’m including tuxedos here, since the basic construction is identical) or a dress for women (even a woman wearing a suit is not so much innovation of fashion so much as a disintegration of a gender barrier thus permitting women to wear what is in its nature an old style of men’s dress), the next rung up the ladder being the unusable and more artistic couture garments. Have we entered a postmodern age of clothing? We’ve already seen things like Lycra bodysuits and other ‘futuristic’ designs that might enter the field of daily dress when that garment is readily recognized as the badge of a class of workers as denim and Doc Martens once were/still are.

I digress.. but digression perhaps is the basis of innovation in fashion. Thus is is slow, unexpected, and unpredictable. Perhaps in this sense innovation happens by itself, without being intended in terms of fashionable-ness. Heck, even Mad Max just looks like the Ramones.

2 Guest Comments »
Simon,
This look in general is very appealing, I agree. However, it is one where I would like to have seen Dolce and Gabbana show a bit more restraint in their sizing and proportion. The overall image from the photograph is that the articles are too large for him. The proper fit of the ordinary fishermen’s clothing in Sicily is a bit more restrained than what they have presented. It is about inspiration, yes but as you know, proportion is everything when one is looking for fine examples of a given season. We cannot forget that loose is one thing, sloppy is another. In my opinion, the right proportion for this style is easy to obtain, one only need view Luchino Visconti’s La Terra Trema (”The Earth Trembles,”) the authentic cinematic classic, which honors the fishermen of Sicily, and their daily way of life, from which this particular look is striving to emulate in a top-drawer format.
Nicola

I am not in the fashion industry, but I dare say, like all other industries, the business of fashion revolves around commercialism – clothes that the masses will understand and pay money for. Sure, you can create an intellectual collection like Prada’s F/W 08 with mini tutus/belts, phantom underwear/cummerbund/something or other and shirts that button up in the back, but do they sell? Perhaps to the extremely fashion-forward man, but not to the majority of others. This alone dictates the range designers are able to explore. An overwhelming majority of men, at the moment at least, are simply not open to non-traditional male clothing. And this demeanour is ever more so prevalent in times like the economic turmoil we currently face.

But does the fashion world create the innovation or does the fashion world merely scavenge what utility has brought about? And does this require a deeper examination of what exactly the ‘fashion world’ is? Because I frankly don’t know enough about the history of fashion to say, though it seems to presently be a marriage of the once-innovative utilitarians and something out of a Dadaist’s nightmare.