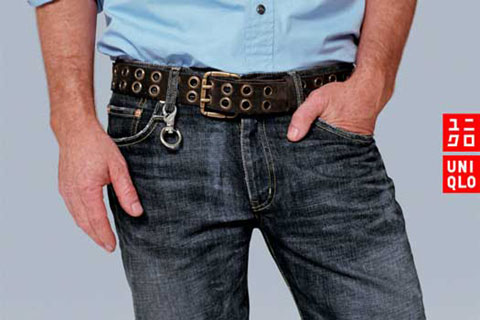 One of the luxuries of shopping at tailors and other high-end menswear stores is the knowledge of staff. OK so if you’re a real shoe geek you might know more than the sales assistant – few people care what a rand is, even if they love shoes. But that assistant will at least be able to explain the different lasts on offer, give you decent advice about sizing and know the difference between an Oxford and a Derby. In short, they will know their stock.

What a shock it is to return to the high street. Inspired by a recent post by my friend Steven Taffel, owner of Leffot shoe store in New York, I went in to Uniqlo yesterday to try its jeans.

If I could help it, I’d rather not pay too much for jeans. As long as they are reasonably well made and won’t fall apart, the only thing I care about is fit. And Steven’s seemed to fit pretty well.

As regular readers will be bored of hearing by now, I have large thighs and a small waist, so buying trousers off-the-peg has always been hard. I recently realised, though, that my tailor can take in jeans at the waist – as long as I’m not that bothered if the thread doesn’t match exactly.

So, all I needed were jeans that fitted in a straight, narrow line and could make it over my thighs. The waist was irrelevant. The good news is, Uniqlo had some. The bad news: it took me half an hour to find them.

Having tried on both slim and regular fits in a few sizes, I was puzzled that the width of the leg (at least below the knee) didn’t vary between styles. I asked one of the sales staff. Blank look. Are the regular jeans more tapered below the knee? Nothing.

OK, this was probably expecting a little too much. These guys didn’t design the jeans after all, they’re just selling them. So I asked whether the blue selvedge jeans (there were two colours, blue and black) only came in slim fit, which appeared to be the case from the table display. No response. “Are these just in slim fit?” I asked. That produced the worst possible response – the assistant started looking at the labels.

If you have to check your own stock to work out what’s there, what use are you? You’re just doing what I’ve been doing for the past 10 minutes. But slower, and with less enthusiasm.

So I took a logical approach, taking two sizes in each of the two styles in three different ranges. Twelve pairs of jeans.

Next time you’re in Uniqlo I recommend asking a fellow shopper for help rather than a sales assistant. They’re likely to know more and be more inclined to help.

I’ve had much better experiences shopping at Uniqlo. Then again, except for my one foray into the New York outlet, all of my countless trips to Uniqlo were in Japan, where the clerks are reasonably knowledgeable–and very helpful.

This was probably some kid doing a part-time job. If you don’t like the service, don’t complain – it gets you nowhere. Vote with your feet. If I was pissed off with service, I would refuse to buy anything there.

While I understand JCM’s approach, it’s not always appropriate. If a business has something I want out of it, or is the only one doing what it does, I will often let a manager know if I am displeased. However, if the business is more of a commodity (restaurants, for example, especially fast food), then I do vote with my feet.

What jeans fit you the best? I’ve been reading your blog for a bit but I don’t think I’ve noticed your pant dilemma. I have the same problem. What brands tend to fit you properly?

Funny to unearth an article such as this – it’s interesting to read stuff from before you were surrounded by only luxury.
This is why I utterly hate the vast majority of sales “assistants” I meet, and by and large actively try to sort what I need by myself. Ofc, this is the price for not shopping at the level you now buy, though . But it’s not only Uniqlo, even middle-of-the road brands such as Massimo Dutti or, higher, Eredi Pisanò are often like this.
Worse than unhelpful, the worst part is when they do find something for you, you try it on, and the fit is clearly not working for you. You say so, and they make a shocked look, as if you’re offending them, because “of course it fits well”.
How do they know? Simple: the next size is too big and the previous too small; that, in their mind, means that size is right and you have to get that item, even though the model just doesn’t work for your proportions.
I don’t know how much of this is lack of knowledge and how much it is being trained to push the product, but the result is the same: the next time I try not to get their “help” in the first place.

Simon Crompton
Reply to  And

You’re right on what I look at now of course, but actually I almost find this experience worst in the big luxury brands. They seem to manage to combine ignorance and apathy with arrogance.

Haha! I remember exactly this on my first and only time in Jill Sanders’s store in London. I was stunned at the apathetic attitude of the sales guy serving me and I remember now it was an issue I had with sizing. I did end up buying the top but the experience and attitude was terrible. I remember also when it was all rung up and I was leaving the counter with my bag and I tried gave a cheerful thankyou and goodbye, the guy couldn’t have looked more bored and indifferent.
A shame, as I’d never step inside one of her stores again because of this, though the fits and style now aren’t what I’d wear anyway. But still. I do wonder if this is a feature and not a bug…?! Because if that was business I owned, I would fire that person, or any staff treating customers in that way ON THE SPOT!